Kiton to Open at Four Seasons

The brand will significantly expand its retail presence around the world over the next five years, adding 30 new units. 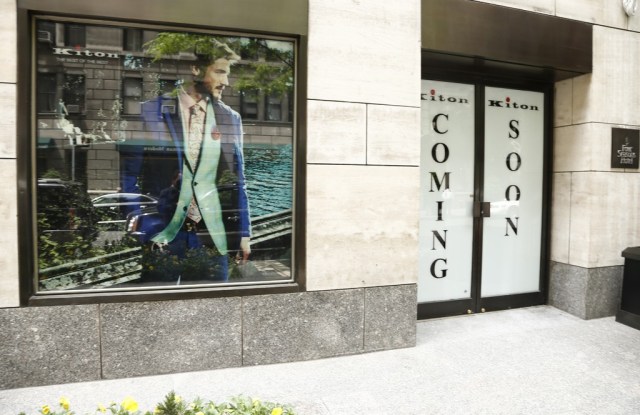 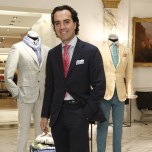 Kiton will significantly expand its retail presence worldwide over the next five years, adding 30 units to the 42 it currently operates. About six will be in the U.S., in key markets including New York, Texas, Florida and California.

As part of that plan, the luxury Italian brand on Friday will open a 500-square-foot location at the Four Seasons hotel in Manhattan that will offer men’s accessories and sportswear.

“This is part of a big program to open more stores in the U.S.,” said Antonio Paone, U.S. president, who designs the men’s collection with his first cousin Antonio De Matteis, chief executive officer. The family-owned Neapolitan tailored clothing company, which was established in 1956 by Ciro Paone, operates a store and showroom in a company-owned town house on 54th Street in Manhattan, as well as units in Bal Harbour, Fla., and Las Vegas. The six-story town house opened in 2003 and includes three levels of retail, a showroom and offices.

Paone said the Four Seasons unit will offer a more edited assortment than the full range of ready-to-wear and bespoke tailored clothing, furnishings, sportswear and women’s wear available at the flagship, and will be targeted to the international traveler.

“Our customers stay at Four Seasons all over the world,” he said. “We found the space by [accident.] I was walking by, saw that it was empty and took it.” The space, which has an entrance within the hotel as well as on 58th Street, was formerly home to a caviar store, he said. The storefront will include three street-level windows.

“We like that it’s on 58th Street, because that’s where all the drivers go,” he said, referring to the limousines and car service vehicles that camp out outside the hotel.

In order to capitalize on the hotel traffic, Kiton will stock shirts, ties, small leather goods, shoes and sportswear in the new space. It will not carry suits, but customers seeking more tailored offerings will be directed to the town house four blocks downtown.

Paone said accessories is one of the company’s fastest-growing categories. Two seasons ago, Kiton brought former Gucci designer Diego Dolcini on board to oversee the creative direction of the accessories offering. “That’s the part of our business with the biggest potential to grow,” he said. “We think it can be very big.”

Kiton operates stores in Europe, Asia and the Middle East in cities including Milan, Munich, London, Venice, Rome, Barcelona, Moscow, Beijing, Hong Kong, Tokyo, Abu Dhabi and Dubai. The mix currently sits at around 65 percent wholesale and 35 percent retail, Paone noted, but within five years that number is expected to be evenly split 50-50.

“It’s at the request of the market that we open stores,” he said. “In department stores, we’re just one of many [labels], but in our own stores, we can really show the development of the brand.” In New York, Kiton is also carried at Bergdorf Goodman, Saks Fifth Avenue and Barneys New York.

Overall, he said, Kiton currently has sales volume of around $150 million worldwide and business in the U.S. market is “very good. We’re very happy.” He said Kiton’s customers — whether in North America, Europe or Asia — were less impacted by the economic downturn and have continued to invest in the brand. “For our customer, there has been no problem,” he said. “And China especially is booming.”

All of the merchandise is produced in Italy, and the brand recently built a factory in Naples to manufacture accessories. Leather goods are made in its factory in Parma, knitwear in Fidenza, outside of Parma, and two years ago, Kiton purchased the Carlo Barbera mill in a move that allows it to also offer proprietary fabrics.

In November, Kiton acquired Palazzo Ferré, the more than 47,000-square-foot building on Via Pontaccio that housed the Gianfranco Ferré label for 14 years. Paone said the space, which is expected to be unveiled during the men’s shows in January, will include a restaurant and lounge in addition to the company’s showroom and offices.

Outside of New York, Paone said the company will be opening a boutique in Toronto with a local retail partner. That store is expected to open in August or September.