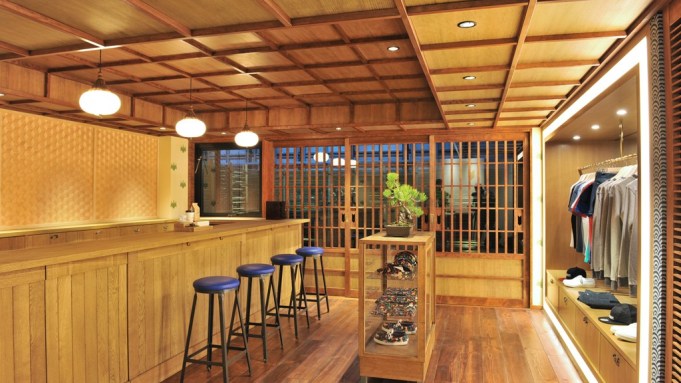 The store features a black brick facade, white interiors, massive columns with marble details and parquet floors featuring a geometric pattern. Accents of woven straw, traditionally used in tatami flooring, are found in the display cases. The brand’s cafe’, just around the corner, takes the Japanese design concept even further. A path lined with walls of bamboo leads through a miniature garden to a set of sliding, slotted doors. They open to a cozy, wooden space housing a small coffee bar with a handful of stools.

Masaya Kuroki, half of Kitsuné’s founding duo and the designer of the store and cafe’, said he used a combination of antique furnishings and and custom-made pieces to create a unique environment. In particular with the cafe, he said he said he was after the feel of an  “old school soba place” with a Parisian sensibility.

“We love coffee culture and always wanted to have a café,” Kuroki said of the outpost, which serves gourmet coffee and sells informal apparel like t-shirts and sweatshirts as well as the brand’s own CDs. The nearby boutique carries a fuller range of accessories and clothing from the brand, including an Aoyama exclusive line of sweaters bearing two of the brand’s singature fox logos.

Kitsuné co-founder Gildas Loaëc said he appreciates the warm atmosphere of the cafe’.

“It’s nice visiting from abroad to get a little Japanese feeling where even the Japanese don’t do it anymore themselves,” Loaëc said.

Kuroki and Loaëc are feting the store and cafe’ with an opening party Thursday evening.

The 10-year-old brand has had a wholesale presence in Japan for five years. Kuroki said the duo have learned a lot about the Japanese market and wanted a chance to communicate their full brand vision to shoppers here. “We really want to talk to Asian people too,” he said.

In keeping with that goal, Kuroki said the brand is looking at potential partnerships to expand further in Asia. Currently Kitsuné has a presence in Asia through retailers like 10 Corso Como in Seoul and Lane Crawford in Hong Kong.

The company declined to give a sales figure for the brand but Loaëc said the company is growing quickly and it is registering sales increases of about 60 percent each year.

Kuroki said Japanese customers are particularly enthusiastic consumers of the brand’s apparel, given their sensibility to high-quality fabrics and taste for French things.

“It takes time to consume it so it gives it an exclusivity,” he said of the brand’s products.