As Pitti Immagine Uomo’s guest designer, Junichi Abe will take over an athletic field dating back to the 19th century to unveil his spring collection. 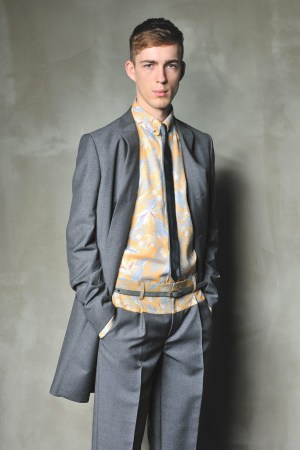 TOKYO — Junichi Abe, the designer and founder of Japan’s Kolor, likes to keep a fairly low profile. The location of his brand’s atelier along a busy but fairly anonymous street in Tokyo’s residential neighborhood of Yoyogi is testament to that fact. His flagship, tucked inconspicuously into the basement of a building in the trendy Minami-Aoyama district, is easy to miss entirely.

But the 48-year-old is preparing to make a bolder statement this season. As Pitti Immagine Uomo’s guest designer, Abe will take over an athletic field dating back to the 19th century — today it is used as a futsal pitch — to unveil his spring collection. His seasonal offerings include retro-tinged Hawaiian prints and innovative fabrications like double-face organdie and a nylon with a crinkly texture resembling paper.

“It was very unexpected to be invited, and I think it’s a big chance for people who have never seen Kolor before to see it there,” said Abe, who has staged runway shows in Paris for the past three seasons. “It has big significance to me, to have the chance to show the brand to people who don’t know it or have never seen it.”

Abe and his nine-year-old brand have fostered something of a cult following in Japan and certain international circles for relaxed but detail-rich apparel. The designer admits he has limited his brand’s retail distribution purposefully to include only certain stores — Maxfield, Biffi and Ron Herman are a few that made the cut. The brand’s men’s wear sells at about 30 stores around the world and 60 in Japan. The company declined to give sales figures.

After graduating from Tokyo’s prestigious Bunka Fashion College, Abe worked as a patternmaker for Yohji Yamamoto before moving to Comme des Garçons to help launch Junya Watanabe’s brand. He spent five years working with Watanabe — during his tenure there, he met his future wife Chitose Abe, who is generating her share of buzz these days with her own brand, Sacai. Abe then spent 10 years designing a brand called PPCM along with three other creatives, before launching his own label in 2004.

Abe, like Watanabe and many other Japanese designers, puts a heavy emphasis on fabrics, using them to germinate concepts for entire collections. Abe uses mainly Japanese fabrics like cottons from Hamamatsu and wools from Gifu, both regions located in central Japan west of Tokyo.

“I have a fabric collection that I’ve been gathering for a long time and I am always adding to it, but before each season I divide that between ‘in’ and ‘out’ in order to understand my own feeling and mood at that time,” Abe said, standing in front of a rough, unfinished wall of concrete in his basement studio. “And then I do the work of again dividing the ‘in’ pile, and through that I come to understand what kind of materials I am into at the time. And that’s not only with fabrics, but also scraps and photos that interest me, and I divide those as well.”

This season represents a departure for him as Abe rarely works with prints.

RELATED STORY: Ones to Watch at Pitti Uomo >>

“I wanted to do something that was different from what I’ve done in the past,” said Abe, adding he was after a “happy” feeling. “I considered things like Sixties-inspired prints, and I thought it would be interesting and unexpected to use a Hawaiian print, which I had never done before, but use it in a way that it didn’t feel out of place.”

While reluctant to go into detail on the record, Abe allowed that he learned a lot about conceptual design during his time at Comme des Garçons.

Abe also cited numerous other inspirations, such as Yamamoto, Issey Miyake and Christian Dior’s work in the Sixties.

“There are so many I can’t count,” he said, looking at ease in cropped pants, a camel cardigan and a jade ombré T-shirt.

Abe maintains a connection to his former employer in business terms as well. The Comme des Garçons’ Dover Street Market Ginza store carries Kolor on its second floor alongside the work of Abe’s mentor, Watanabe, and other men’s labels like Visvim and Thom Browne.

“Basically, her way of thinking is that you’re you and I’m me, and we’re both people who create things,” Abe said. “She doesn’t really think of people as being above or below one another.”