"Luxurious industrial," is how the designer describes his first signature boutique, which opened today, just in time for Men's Fashion Week. 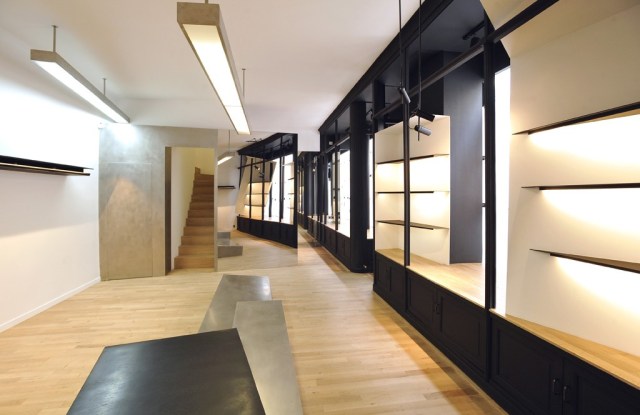 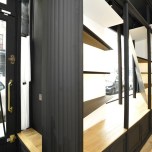 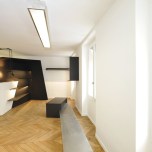 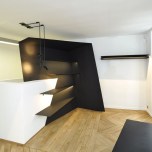 “It’s a little like men’s wear: The problems are often inspiring,” the designer said of the store’s particulars, including wide-yet-shallow proportions, and Forties window cases that were a feature of the location and could not be altered. Van Assche and architectural firm Ciguë met the latter restriction by painting them with rubberized black paint and inserting two of the shelving units into the window display area, giving the narrow main floor some extra breathing room.

“The idea was to have a very masculine environment,” he said. “[The store] is not huge, but it’s going to be sufficient for a good representation of my collection.”

For the Belgian designer, who is also the creative director of Dior Homme, the boutique marks an important milestone for his nine-year-old signature label, bound to heighten his visibility and possibly attract potential franchise partners and investors.

His privately held company ships to about 140 doors worldwide, with the business concentrated in Asia, particularly Japan, and Europe.

The Paris boutique opened with Van Assche’s fall 2013 collection, including an array of shoes, backpacks and other accessories that represent about 40 percent of the business.

A soft-spoken designer, Van Assche said the business has been on a solid growth track the past two years, rebounding from “rough times” when the financial crisis sent stores scurrying away from upstart labels.

His is the latest fashion label to gravitate to the burgeoning Rue Saint-Honoré and its immediate environs. Balenciaga, Chloé, Theory, & Other Stories and Dior Parfums are among recent openings, with a Viktor & Rolf flagship slated to arrive this fall.