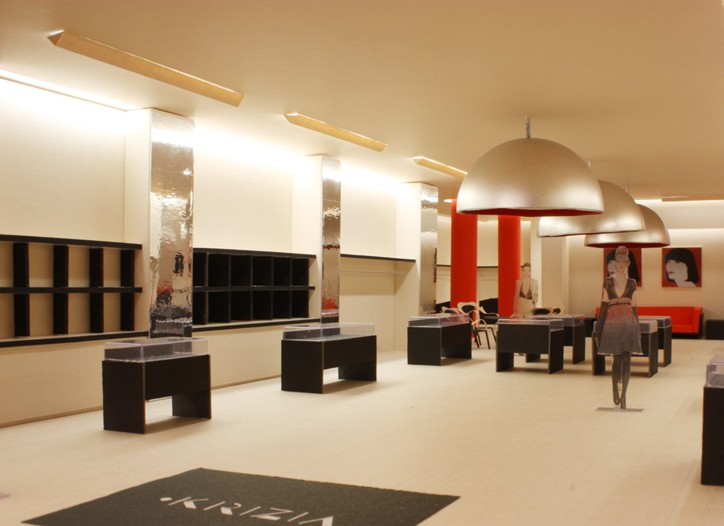 NEW YORK — After more than 30 years on Madison Avenue, Krizia is off to trendier environs.

The Italian fashion company signed a lease for 4,000 square feet at 446 West 14th Street in the Meatpacking District and plans to open a flagship there in May.

Krizia was firmly entrenched uptown, occupying 769 Madison Avenue at 66th Street for more than a decade. In April, when its lease expired, the brand moved to temporary digs at 805 Madison Avenue between 67th and 68th Streets. The temporary store will stay open until the flagship is ready.

“This was a long time coming,” said Joe Gortner, Krizia’s store director. “The Krizia name had kind of diminished. A tremendous number of women under 40 weren’t familiar with Krizia. I don’t see a younger customer shopping on Madison Avenue with the exception of Dolce & Gabbana and Prada. The Meatpacking District is the new hot area.”

Gortner said the brand isn’t big enough for two New York locations. Krizia’s only U.S. store is in Manhattan. He believes many of Krizia’s clients will visit the downtown store once it opens. “A lot of my regular customers say they can’t make it down there, but then they tell me they had dinner in the Meatpacking District the other night,” Gortner said. “There’s a lot that’s going to happen in that area [such as the proposed Whitney Museum of American Art satellite] that will bring them down eventually. I’ve said to a couple of customers, ‘If I have to, I’ll send a car for you.’”

The flagship will sell two of Krizia’s many collections, Krizia and Krizia Poi. The store design will be similar to Krizia units in Italy and Asia, where dark wood and bone white marble are the dominant materials. There will be more bursts of color, especially pops of red, Gortner said.

Mariuccia Mandelli, the 80-something-owner and designer of Krizia, “really got excited about the area,” said Crown Retail Services director Stephanie Snyder, who represented Krizia in the Meatpacking space. “She felt this is where there is new blood and vibrancy. She also really liked the fact that Stella McCartney and Alexander McQueen have flagships on West 14th Street.”

Krizia’s heyday was in the Sixties and Seventies, when Mandelli designed minimalist garments and short shorts, dubbed HotPants. Mandelli was a pioneer of sorts, when she opened her K Club in Barbuda in 1990. Other designers such as Giorgio Armani and Missoni began opening hotels a decade later.

Over the years, Krizia has hired some well-known designers, including Alber Elbaz and John Paul Knott. Mandelli, who has always maintained a strong hand in the collections, still designs the Krizia offerings with the help of a team, Gortner said, adding, “Two young people who have worked with her on the last two collections will probably be announced as creative directors soon.”