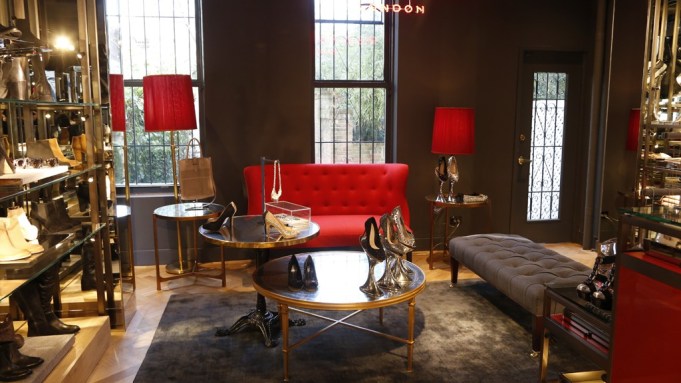 With sales projected to reach $400 million as it rings in its 50th birthday this year, Kurt Geiger still remains relatively unknown in the U.S. But the company hopes that’s about to change, as a key initiative for the brand is bolstering its profile in America through retail and wholesale channels.

Geiger is carried in about 350 doors worldwide and maintains 80 freestanding doors — 55 of these in its native England — making it the second-biggest shoe company in the U.K. after Clarks.

The Jones Group acquired the company in June 2011 for $350 million in cash, and 13 months later opened its first American store in San Francisco. In August, another unit opened at South Coast Plaza in Costa Mesa, Calif., an e-commerce site launched at kurtgeiger.com in October, and on Jan. 29, its first New York boutique opened.

Seated on the plush scarlet couch in the back of the new Bleecker Street store, which overlooks a quaint outdoor garden, chief executive officer Neil Clifford revealed that a bigger SoHo location will open this year, with doors in Las Vegas, Miami and Los Angeles to follow in 2014. A wholesale partnership with a leading retailer is also in the works for fall.

“We’re desperately looking for a location in SoHo. There are three or four spaces we’re looking at. We want to be in that square of Greene, Prince, Spring and Mercer [Streets],” Clifford said.

Upon entering the boutique in Manhattan’s West Village, a chandelier of shoes — a signature in Kurt Geiger stores — dressed with graphic black and white pumps and wedge sneakers highlights the current collection.

“Our job is to always push — and the stuff that we actually really push is advanced, and we know it’s early. That gladiator is already in our top-10 styles [sales-wise], and it’s snowing. This means our customer really responds to that design aesthetic,” Farrar-Hockley said.

Farrar-Hockley also founded the brand’s “Everything But the Dress” campaign to coincide with the rollout of accessories like handbags, sunglasses, jewelry and tech-cessories.

But for fall, she said it’s all about the single sole and stiletto — and Kurt Geiger London’s new Court collection (“We call it a court shoe, you call it a pump,” said Farrar-Hockley) is slated to hit stores in June. The selection of pumps will come in 25 fabrics, materials and colors such as black ombré calf hair, gray and blue leopard sequins, yellow snake-embossed leather and textured petroleum bronze leather.

Besides the design of the product, it’s all about getting the right mix of retail, wholesale and online that will ultimately determine Kurt Geiger’s success in the U.S., Clifford said.

Overall, though, the breakdown is 80 percent retail and 20 percent wholesale. Men’s footwear constitutes about 30 percent of the retail business.

“We will find that in the end, wholesale will grow, but we will never be 50-50. We love the control of our distribution and the way that our stores look. We have this mega protection of the brand,” Clifford said. “We see more of a retail rollout than anything else, but that might take three or four years. It’s not something we’re crazy rushing with.”