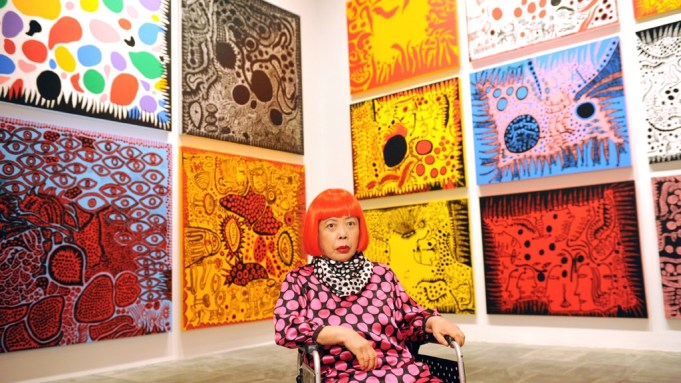 Eyeing one of the galleries stacked with her psychedelic paintings at Manhattan’s Whitney Museum of Art Monday afternoon, Yayoi Kusama said, “I’m genius.”

At 83, the beyond-prolific artist wasn’t overstating her career. A beacon in the avant-garde, Pop Art, minimalist and feminist art movements, the Japanese artist’s portfolio includes painting, collage, sculpture, performance art and environmental installations. Georgia O’Keeffe helped her find her way to the New York art scene where Kusama influenced artists such as Andy Warhol and Claes Oldenburg, and hit the Hamptons with Mark Rothko and other creative pals. During her 15-year stay in the States, Kusama left quite an impression. Widely known for her polka dots and her naked performers, she staged the Grand Orgy to Awaken the Dead at the Museum of Modern Art and presided over the Homosexual Wedding at the Church of Self-Obliteration at 33 Walker Street. She even wrote to former President Richard Nixon offering a sexual romp if he would stop the Vietnam War.

A few years after moving back to Japan in 1973, Kusama checked into the Seiwa Hospital for the Mentally Ill, where she continues to live by choice and work tirelessly. Kusama has returned to New York this week for the first time in decades, thanks to a collaboration with Louis Vuitton and her retrospective at the Whitney, which bows Thursday. Wearing her polka dot Louis Vuitton scarf, and a polka dot dress her team helped design, she graciously thanked Louis Vuitton chairman and chief executive officer Yves Carcelle for giving her reason to return to New York. The gratitude appeared to be mutual as Carcelle told her early on in their conversation that he owns one of her paintings from 1953.

Another one of her paintings from that period sold at Christie’s for $5.1 million a few years ago, a record for any living female artist. And the octogenarian shows no signs of easing up. “I painted everything myself and I am very proud of that. I have done 200 paintings recently — only some of them are in the gallery downstairs,” Kusama said. “My legs hurt because of the years and years [I have spent] standing while painting. Now I am in a wheelchair [albeit a polka dot-covered one]. The doctor is taking care of my knees. He said he can fix them.”

WWD: It has been many years since you were in New York. What strikes you about how the city has changed?
Yayoi Kusama: When I was living here in the Sixties, it was like the city was at the utmost point of the world. There was more energy. Today it lacks energy.

WWD: How was it that you happened to write to Georgia O’Keeffe and she encouraged you to come to the U.S.?
Y.K.: In my home country, there was a little shop with old books but it was really in the countryside. You couldn’t find English books. I found this very avant-garde American art book that had information about Georgia O’Keeffe. I was very much impressed by her. I went to Tokyo to the American Embassy and I spent six hours in the documentary room looking up her name on this Who’s Who list of Americans that they had. I wrote a letter to her and sent a picture I had done, too. It was a daring thing to do. Everyone told me she will never write back but she did.…Young women, what they called war brides, were the only ones who traveled at that time.

WWD: Is it true that you started your polka dot technique at the age of 10?
Y.K.: My mother was against me being an artist. She just wanted me to marry a rich man. She was so angry when I started painting that she never gave me any money to continue. Other people helped me financially and bought my paintings. Georgia O’Keeffe proposed that I live with her. She was in New Mexico then and I wanted to be in New York.

WWD: How have you managed to be so prolific?
Y.K.: When I decided to go to the States, I burned all of my paintings from the previous 10 years. I didn’t want my family to throw them away because they were against the idea of me becoming an artist. I don’t know why I am so prolific. You should ask my hands. When I paint, some things come out and I don’t know. Maybe it’s because I have such talent as a painter. I am so happy about that. Here in New York, so many people are happy to see me. It moves me a lot. I don’t know where my energy comes from. It’s my hands that create faster than my head. It’s just the way it is.

WWD: Do you have a favorite memory of New York?
Y.K.: When I went to Central Park and took the rowboats out or went to the beach in Southampton and swam in the sea. I had a lot of fun with Donald Judd, Andy Warhol, Barnett Newman and Mark Rothko. It was one of the best times in my life.

WWD: You once said that had it not been for art you would have killed yourself. Do you still feel that way?
Y.K.: I feel that way exactly. There’s not one day that I don’t think about death. The fact that I paint helps me to keep these ideas away and continue.

WWD: Why do you choose to live in the psychiatric hospital?
Y.K.: Because I am sick. It is difficult for me to be alone and I feel relaxed being surrounded by people.

WWD: In the Sixties, you stayed in a hospital due to overworking. Now that you live in a hospital, you seem to be working more than ever. How is that so?
Y.K.: I think that if I didn’t live in the hospital, I couldn’t continue painting. I have hallucinations and these symptoms. The fact that I feel safe in my surrounding allows me to keep painting.

WWD: There was a Kusama collection sold at Bloomingdale’s in the Eighties. Do you see this as a new incarnation of the fashion segment of your career?
Y.K.: I was selling some fashion clothes at that time, but I have been making things since I was very little. Be it a sculpture or be it clothes, for me it is the same thing. It’s my creation. I don’t see any difference. It is part of my art. I have written poems…

WWD: Do you think art needs to be more commercial or to have corporate support from companies like Louis Vuitton in order to reach more people?
Y.K.: I will be an artist until the end of my life. If with the power of art, we can touch the hearts of people, it’s a wonderful thing so why not with the help of business. In that sense for me, business can also be a sort of art especially in the fashion world.

WWD: Why do you think you and Marc Jacobs get along so well?
Y.K.: Marc Jacobs came to see me in Tokyo in 2006 and he asked me if I wanted to come to the States and do fashion. That sort of encouraged me. At that time, I was writing poems and novels. Fashion has always attracted me, not only when I was living in New York but also when I was five. I created this T-shirt that was half red and half white. For me, it was a sculpture. I was so honored when Marc came to see me in Tokyo. I still have a photo of that visit hanging on the wall of my studio. We are standing with one of my creations, this huge pumpkin, between us.

WWD: How do you define beauty?
Y.K.: It’s myself. The definition of beauty is me.…In this world full of terrorism, war and things like that, I think art helps a lot. But I also think that fashion, like what Louis Vuitton does, helps a lot because it proposes a view of beauty to the world. The most important thing in the world is peace, happiness and love because the world around us has such hatred. If I can contribute as an artist, that is how I would like to use my life. I think as an artist I can deliver messages.