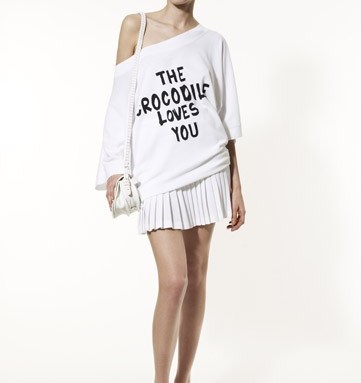 With the Lacoste + Malandrino line making its debut in stores in mid-April, both the French brand and Catherine Malandrino are gunning for shoppers to look at the label with fresh eyes. The 12-piece spring line — the first in a collaboration that will last four seasons — has white harem pants, slinky knit dresses, wide-leg pants and mini-pleated skirts, a far cry from the standard polo shirt.

“My most important role with Lacoste is to open the door to the feminine world,” Malandrino said of her work with Lacoste. “Now I am relaying effortless, chic, everyday clothes that you don’t have to think about. All of the silhouettes can be eye-catching, whether it is a miniskirt or high-waisted pants.”

With her designer status, French upbringing, Saint-Tropez hideaway and Lacoste-loving husband, Malandrino was a logical choice to partner with Lacoste. Yet confident as Steve Birkhold, chief executive officer of Lacoste Devanlay USA Inc., was, even he was surprised by her gusto. “As we got deeper into the collaboration, Catherine’s passion for the brand, which she showed not only verbally but also creatively, reminded us that we had made the right choice,” said Birkhold.

While Lacoste has on occasion enlarged its most coveted asset, the crocodile logo, Malandrino was the first to duplicate it. Lacoste + Malandrino items have two kissing crocodiles, one yellow and the other green. Birkhold said “logo utilization” is something the brand protects at all costs. “We like to keep the logo pretty pure. We might change the color, and we have used an enlarged one, but it was a big deal to turn the crocodile around,” he said.

The logo has been on the scene for more than 80 years, stemming from a bet between two players on the 1925 French tennis team. Walking along one of Boston’s tonier streets, René Lacoste eyed a crocodile suitcase in a store window and told the team captain Pierre Gillou, “If I win the match, you must buy me this suitcase.” Although the French team did not win, sportswriters caught wind of the tale and one reported, “The young Lacoste has not won his crocodile skin suitcase but he fought like a real crocodile.” As early as 1927, Lacoste’s friend and fellow sportsman Robert George designed a crocodile with its mouth wide open, which René Lacoste wore stamped on his blazer, according to company lore.

As for her interpretation of the logo, Malandrino said, “People immediately know it’s Lacoste and they have a lot of questions about it. Someone said it is the best symbol for a French kiss. It brings questions of emotion and sensuality, and that’s what I wanted to bring to Lacoste.”

The 12-piece spring line wholesales from $145 to $750 and the 12-piece fall one, which Lacoste previews today, will run from $165 to $750. Lacoste + Malandrino will be sold in about 43 of Lacoste’s 70 full-priced boutiques, as well as a few others that will bow later this year, including the remodeled Fifth Avenue flagship in Manhattan in July. (The company also has 30 outlet stores.) The new line will also be sold in Catherine Malandrino’s 11 stores, and later in the year at her upcoming boutiques in Qatar; Kiev, Ukraine and Riyadh, Saudi Arabia. It will also be available online and in select “superpremium” wholesale accounts, Birkhold said, including Larrimor’s, Akira and saks.com.

Birkhold declined to comment on projected volume, noting that Lacoste is counting on the Malandrino deal to be more of an image maker than a huge moneymaker. “Our five-button stretch pique polo was a $100 million business by itself. But the days of one item generating that kind of volume are gone for now,” he said. “We don’t really look at this as a volume opportunity. These things generally don’t rely on commercialization. We look at it as creating new interest in the overall brand,” Birkhold said.

To try to appeal to Malandrino’s “savvy” customer base, Lacoste is using blogs, social media and public relations efforts to spread the word about her involvement with the brand. Having opened a 9,000-square-foot office at 551 Madison Avenue in Manhattan with eight flexible showroom spaces last fall, Lacoste is intent on amping up its presence. In the next few months, Birkhold said he will unveil a deal with another designer, but Malandrino remains his focus for now.

“Catherine is an amazing designer. She has really opened our eyes to what Lacoste can represent for the fashion consumer. I think a lot of people will be surprised,” he said. “To succeed is really just changing people’s perception that a polo is all we design.”