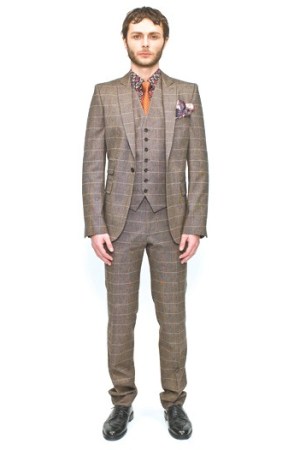 PARIS — Christian Lacroix SNC, reduced to a licensing operation last December following a bankruptcy filing, is back on the move.

This story first appeared in the March 1, 2010 issue of WWD. Subscribe Today.

• Premium stationery with New York-based Libretto Holdings, officially launching at the September edition of Maison & Objet, but trickling into some high-end paper and museum shops beforehand.

• Decorative wood panels with France’s Marotte, launching to the trade in June and conceived as a business-to-business venture for decorators.

Nicolas Topiol, Lacroix’s chief executive officer, disclosed those deals in an exclusive interview with WWD, and said he’s in advanced discussions to reenter the innerwear and children’s wear businesses with new licensing partners. Talks are also under way to license an array of women’s and men’s accessories.

Despite the wrenching process of cutting some 70 employees just ahead the holiday period, Topiol said Lacroix’s existing licensing partners for men’s wear, silk and bridal dresses stood by the company, owned by Florida’s Falic Group, through its Chapter 11 woes and the failure to find a new investor. The Falics had initiated a costly upscaling drive that coincided with the global economic crisis and drove Lacroix deeply into the red.

A “transition” team of about 30 people will be weeded out further, leaving about 12 employees to carry on the Lacroix brand, founded in 1987 when luxury group LVMH Moët Hennessy Louis Vuitton set up a couture house just for the French designer, who first made his name at Jean Patou.

Remaining employees will include creative director Sacha Walckhoff, who worked beside the couturier on-and-off since 1992 and was part of the team that launched the secondary lines Bazar and Christian Lacroix Jeans.

Meanwhile, Lacroix himself, listed among creditors during the initial bankruptcy filing in May 2009, has severed all ties to the company that bears his name. He continues to design theater costumes, hotels and the like through his independent XLCX studio.

Market sources estimate Lacroix-branded products currently generate revenues of about 45 million euros at retail, or $61.2 million at current exchange. Meanwhile, a fragrance partnership with Avon, launched in 2007, is estimated to generate more than double that at wholesale.

He noted that Lacroix’s master fragrance license with Inter Parfums is set to expire at the end of the year and the two firms will part ways. Meanwhile, licenses will continue with Sadeve for men’s suits and sportswear, Rousseau for men’s shirts and knitwear jersey, Mantero for scarves and neckties, and Rosa Clara for bridal wear.

Expanding men’s wear and entering the home decor category are seen as immediate growth avenues, while plans to reenter women’s ready-to-wear under license are not envisioned before 2012. In the meantime, Lacroix boutiques will go dark, and iconic furniture from the couture salons on Faubourg Saint-Honore will be auctioned at Sotheby’s on May 26.

“I think it’s better to start fresh. There’s a new life, a new chapter starting in this company,” Topiol said. “The brand is strong, it’s known and we feel we can really build on that.”

Indeed, he cited ambitions to open a new Paris boutique in 2011 to showcase the array of Lacroix-branded products.

Territorial expansion — via licensing, franchises or retail partnerships — is seen as another growth vector for the company. For example, Lacroix has long-standing licenses in Chile and Argentina, with seven freestanding stores in the latter country.

Meanwhile, the company engaged brand guru David Lipman, who is opening a branch in Paris, as its marketing and creative agency, while public relations firm BCPM is charged with keeping the Lacroix name present in fashion magazines and on red carpets.

Already, recent and vintage Lacroix dresses have been worn by the likes of Chloë Sevigny, Diane Kruger, Eva Mendes and Ginnifer Goodwin during Hollywood’s latest award season. “We’re working on the Oscars now. We’ll see if we score,” Topiol said.