Twenty years after the U.S. helped Christian Lacroix make a name for himself, he is opening his first Manhattan store. 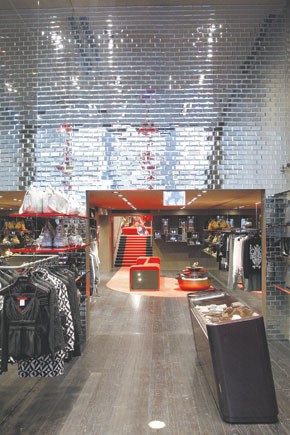 Twenty years after the U.S. helped Christian Lacroix make a name for himself, he is opening his first Manhattan store.

With its mirrored tiles, customized chandeliers and walnut veneer walls with kaleidoscopic patterns, the designer’s French Baroque emporium at 36 East 57th Street draws attention to a renewed commitment to his flamboyant, high-end ready-to-wear and couture. Once he exited Jean Patou to start his signature label, American editors and consumers were among the first to embrace his work. Apparently, more than a few haven’t forgotten, considering how several eager customers tapped on the store’s front door Tuesday, wanting to shop.

“I will never forget how supportive the United States and New York were at the very beginning of my career, so it is a legitimate return to my ‘American roots’ 20 years later, after my first show here,” Lacroix said in a statement.

The boutique officially bows today and will be the designer’s fifth one owned and operated by Christian Lacroix Inc. There are 23 stores in total, with the remainder set up through partnerships and franchises.

The Falic Group bought Lacroix’s company from LVMH Moët Hennessy Louis Vuitton nearly three years ago. In that time, the new owners have been weeding out ancillary licenses like children’s wear in order to focus on Lacroix’s signature and couture collections. Lacroix was the only fashion company LVMH has started from scratch, but under its tutelage the label was splintered with diffusion lines, according to Lacroix’s chief executive officer Nicolas Topiol.

“This is the right marketplace. We have the brand recognition. For the past three years, we have been repositioning the company as more of a luxury ready-to-wear label,” he said. “New York is the cornerstone of that strategy.”

In 1987, Lacroix was named the most influential international designer by the Council of Fashion Designers of America, and soon after landed on the cover of Time magazine.

“We’ve planned to open a New York store since we took over the brand. The U.S. has always been a priority for the brand. The interesting thing with Lacroix is when the company was founded, the U.S. applauded his work and was a main market. But we felt it was not shown in the right way. You couldn’t buy a great amount of Christian Lacroix [in the U.S.],” Topiol said.

Saks Fifth Avenue and Barneys New York have since stepped up their respective representations of the brand, so the timing for a New York debut seemed right, Topiol said. The American market accounts for 10 to 15 percent of the designer’s total business and that figure is expected to climb to 20 percent in the next year, he said. Its share is also growing faster than other countries’.

The Kreo Gallery and Pavlik Design Team handled the 1,700-square-foot boutique’s design and production. Mannequins dressed in eveningwear stand beside a baby grand piano with holiday ornaments at their feet. Indoors, women’s rtw is showcased near the front of the store and accessories are displayed just beyond that area in a smattering of modernistic glass cases. There is also an area with a modernistic couch. Beyond that, red carpeted steps lead up to an eveningwear section with a circular sofa to make shoppers more comfortable. Eveningwear is expected to spur store sales, with an $11,475 black embroidered coat with fur and silver detail, an $11,622 black embroidered gown and a $5,335 short black dress with ruffles projected to be winners with New York shoppers, said store manager Elisabeth Newlin.

“In this country, women wear short and long dresses. In Europe, women tend to wear long,” she said.

Having first worked with Lacroix 10 years ago, Newlin said even she was surprised by the store’s dramatic decor. “When I first walked in, I thought, ‘Is it a store or an art gallery?'”

Lacroix is expected to see for himself in March, when he hopes to visit New York.