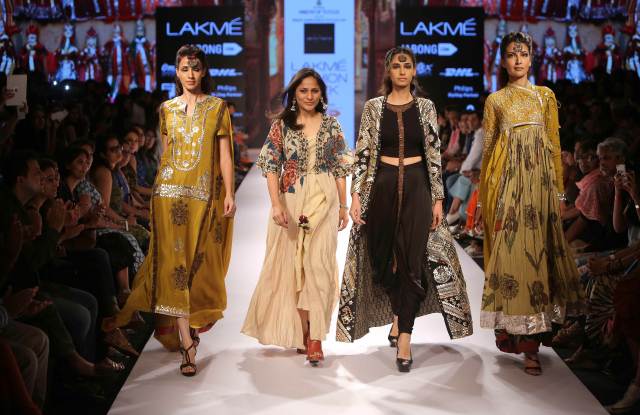 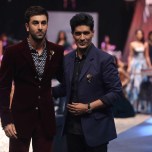 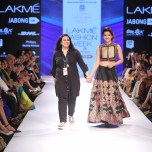 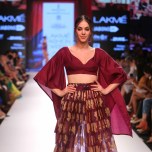 MUMBAI, India — There is even more glitz and party spirit at Lakme Fashion Week as the event continues the 15-year celebrations that began with the LFW summer-resort season last March.

The five-day winter/festive season opened Wednesday featuring 100 designers, a big leap from 84 in March. It is being seen as a time to take stock, both of the industry and of the event, which opened with a pre-event show on Tuesday by long-established designer duo Sandeep Khosla and Abu Jani.

The show set the tone for pomp as well as partying with glamorous embroidered evening dresses, a cream and gold color palette and retro music that had the audience foot tapping.

“We have the senior most fashion designers such as Abu Jani and Sandeep Khosla, Ritu Kumar, Tarun Tahiliani, Neeta Lulla, Anita Dongre and then we have the younger designers who are launched with the event. That’s the charm of Lakme Fashion Week,” Saket Dhankar, vice president and head of fashion at IMG Reliance Ltd., said.

The fashion week is organized by IMG Reliance Pvt. Ltd., a venture between Reliance Industries Ltd. and sports marketing and management company IMG Worldwide, in collaboration with beauty brand Lakme, which is a subsidiary of consumer goods company Hindustan Unilever. LFW focuses on the current season and is known for spotlighting young designers.

Dhankar said the process of making the shows more inclusive has been stepped up, with several events in other cities preceding LFW, including a model search and presentations in Hyderabad, Bangalore and Delhi last month.

“When I took over in 2013, people appeared to think LFW is just a Mumbai thing. So this time, we wanted to engage with people across India. After all, we are a national event. Why should we restrict ourselves only to Mumbai?” he said.

Dhankar observed that the “hunger for fashion is getting stronger.”

“And if you create quality fashion, the response is amazing. People are much more receptive to fashion than they were before. Our social media has also got stronger; we have more than two million followers – on Google plus, Facebook, Instagram, Twitter,” he said.

The focus on launching new designers continues – 21 of the 100 designers showing this season are making their debuts during the week.

The winter-festive season is usually a bit more dramatic, although “festive” often can be used for “wedding styles” in India, a large part of the country’s designer market.

“Winter-festive is a little more resplendent,” observed Mayank Anand, who designs along with Shraddha Nigam, “with pricing a bit higher as well as a stronger play with fabrics.”

It is also an opportunity to show the distance the duo has come in the five years since they launched at the same event. “LFW has really nurtured us. After our first season, we were in 32 stores. We were everywhere overnight,” said Anand, who is in international markets as well, including Singapore and Kenya.

Their collection, “The Textile Brigade” was an ode to weavers across the country. “They work tirelessly to keep the diversity of Indian textiles alive and we want this to be a tribute,” he said. The designers collected old saris and created new designs after cutting the fabric and stitching it together.

For Gaurang Shah, a Hyderabad-based designer who showed Thursday, it is about creating special weaves for the saris — with the fabric and its creation as the real attention-grabber. “This is what I focus on. I have eight stores now – there is no doubt that people are buying,” he said, adding that the one reason he showed at LFW was the amount of attention drawn to the show. “I get calls from different countries after my show here – it creates a lot of buzz,” he said.

Most often, the silhouettes at Lakme Fashion Week are more Westernized – and this time is no different – although there is a lot more obvious experimentation to create fusion lines. “Fashion has simply got more global,” said Nikasha, whose collection combines East and West, using flamboyant colors and strategically placed embroidery. “We are channeling the feeling of a new kind of freedom,” she said.

The first day ended with a show by Manish Malhotra, a favorite of Bollywood stars, who has also had a long career creating costumes for movies. Malhotra launched his first men’s collection called The Gentlemen’s Club at an off-site show at Mehboob studios, in the heart of the film industry.

There were more than a few gentlemen in this club – 40 male models walked the runway, including well-known actor Ranbir Kapoor. There was a great variety of adornments for men – gold sequins, embroidery, crests on blazers – as well as suits and waistcoats and the Indian bandhgala. The designer will open his first men’s store in New Delhi next month.

LFW will close Sunday with a show by Gaurav Gupta, who Dhankar described as upholding all the values LFW stands for — “young, energetic, buzzing. His styling is very glamorous.”

A lot of designers appear to be working to — as Jani and Khosla described their own collection — reinvent the traditional. Meanwhile, there is anticipation for a host of other shows on the schedule, including designers Dongre, Kumar and Tahiliani.