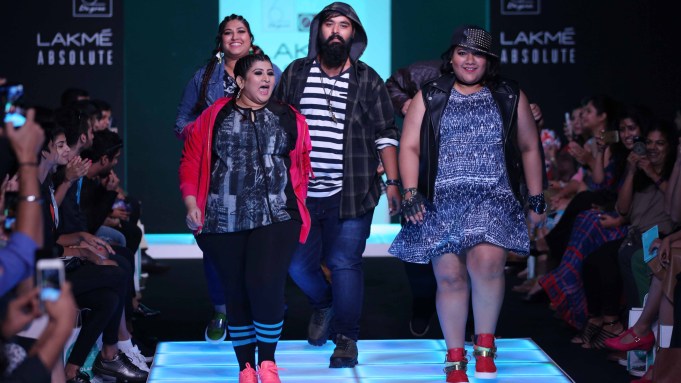 MUMBAI, India – The most recent Lakmé Fashion Week here was all about being more inclusive.

From the show by Sabyasachi Mukherjee, who was doing the finale for the first time, to the appearance of Lakmé face and Bollywood actress Kareena Kapoor, the emphasis in many cases was to show that fashion is for everyone, no matter their size.

Mukherjee, known for his self-effacing manner and simple designs, said with a smile after his show, “A lot of people think I’m not capable of doing sexy clothes…. It’s about doing the right clothes at the right time and that is the most potent inspiration for a designer.”

His collection traveled from the Twenties to the Seventies, catering to everyone from those who sought bejeweled micro minis to ones who preferred ankle length; his woman was wholly Western one minute and completely Indian with lehenga and head covered the next; she wore elegant white, or heavy reds. But throughout, she was covered in extensive embroidery and sparkling beads.

The industry’s new inclusive message was also driven home by the first plus-size show on the last day of Lakmé Fashion Week, which is organized by the beauty brand Lakmé and IMG Reliance Pvt Ltd. Although the show, styled by designer Shilpa Chavan for retail brand All, was more about attitude and panache than design, it generated praise for the organizers.

“It makes us feel a lot better about going out shopping and styling ourselves better,” said one of the models for the show.

Diandra Soares, a former model, designer and a television personality, made a special appearance to support the cause. “I’ve been talking about not body shaming and all of these kinds of things, being part of the industry for over 20 years. It’s an important step forward,” she said.

Chavan said that the clothes were all grunge-style, Westernwear, celebrating the body instead of being wrapped in layers of sari, or flowing dupattas.

Although conceptually strong and high on energy, the styles themselves were disappointing; the show perhaps better suited to be held for an in-store or mall promotion.

There were different sized women at Wendell Rodricks show as well, as he pulled two rabbits from his hat. The first one was that the designer revealed he had stepped back, with his protégé Schulen Fernandes leading his label from this season. The other was a project he has been working on for some time to develop a size chart for India. “There is no size chart in the country. We are supposed to be the biggest, youngest economy and consumer in the next five to 10 years and we don’t have a standard chart,” Rodricks said. “Every designer comes with a different size chart. There is too much confusion for clients, buyers or for the retailer. That needs to be sorted out.”

The designs for the show translated his language into fabric, with trapezoid shapes that worked for all sizes.

Although Lakme Fashion Week focuses on festive wear, it appears to have been taken over by the commercial draw of the bridal market, which designers say they would like to grow their collections beyond for aesthetic reasons.

It appeared to be a step back for the fashion week, as even festive and resortwear had a heavy emphasis on designs for the bridal market. However, the new bride appears to be a lot more experimental in terms of style. Tunics, capes and variations of the men’s dhoti morphed into gowns and saris were all part of her envisaged ensemble. Although she is going far beyond the traditional reds, and is certainly interested in metallic and gold judging by the colors on the runway, her lust for shimmer appears to remain unsated.

An unexpected turn was designer Payal Khandwala, who did a show for the Lakmé salon bridal — the usual simplicity of her silhouettes and her play on textiles contrasted with the idea of the glittering bride. Her show, geared for the “non-conformist bride,” had jewel tones, special textiles from Banaras and raw silks with light embroidery and capes.

Instead of the usual fitted Western silhouettes during the week, many designers showed more shapeless styles, worn with flat shoes or slippers. As Purnima Lamba, head of Innovations at Lakmé pointed out, sustainability was a big theme, one that has crept into a larger consciousness, beyond the one-day assigned to it in each fashion week.

Several designers plied the runway with their more sustainable creations on other days as well, but many of the collections looked dispirited. Buyers questioned whether sustainability was overtaking the sense of style and if the two could not coexist better.

The special day for textiles and sustainability had some standouts, though. Pranami Kalita, a young designer from Assam, told WWD her collection was inspired by Majuli, the biggest river island in the world, which is ravaged by floods each year. The collection was made from specially woven Assamese silk. “But these are all very modern silhouettes, with lots of capes and pleated skirts. I’ve been a Chanel girl, and my designs are just an extension of myself,” she said.

She was one of three designers from Assam making their debut in this section. Others who showed on this day included Anavila Misra, Sanjay Garg and Pella.

Other recurring motifs during the shows were capes, frayed embroidery and lots of floral patterns. Different kinds of silks from unusual parts of India, beautiful chanderi and digital prints added a new dimension.