While the range of designs in general appears to have grown, there was also a greater level of freedom of expression. 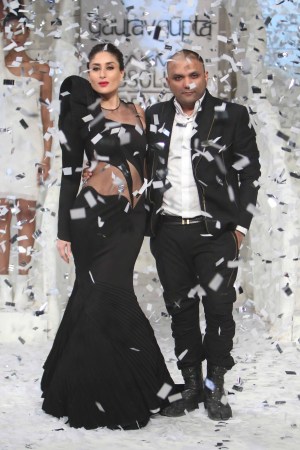 MUMBAI, India — Closing with elaborate sets — and again predominantly in tones of whites and blacks on the runway as it did last season — Lakme Fashion Week concluded its five days of shows Sunday with a finale by designer Gaurav Gupta.

The show was at Mehboob Studios in Bandra, in the heart of Bollywood, and had a startling white backdrop and a circular runway.

But the focus on fantasy — even with Bollywood actress and face of the Lakme beauty brand Kareena Kapoor in a black gown — wasn’t limited to the finale. The week had fantasy galore beginning with the first day, when designer duo Sandeep Khosla and Abu Jani created elaborate outfits with sequins, embroidery and ruffles, while Narendra Kumar conceptualized a bridal trousseau with the French Riviera in mind and, as he said, “for the modern man or woman for whom home could be anywhere in the world.”

There was a lot grounded in reality as well, though, both in the designs and the textiles used. The textile day on Thursday echoed Prime Minister Narendra Modi’s campaign to reinvent Banaras and its wealth of weavers. Held in partnership with the ministry of textiles, the day was an immediate fillip to the weaver, as well as the designer – weavers walked the runway at the end a show by Ritu Kumar, who is known for her use of textiles. Anita Dongre also brought the craftswomen who worked on her collection onto the catwalk.

Other standouts included Swati Vijaivargie’s color and geometric combinations, along with comfortable cuts, as well as Ka Sha, who layered and used tassels combined with colorblocking.

While the range of designs in general appears to have grown — from wedding styles to more experimentation with minimalist and colorblocking — there was also a greater level of freedom of expression. There were a lot of monochromatic tones, far more cleavage and a plethora of transparencies showing legs, belly buttons and shoulders.

“We are excited about the market,” said Tim T. Müller, chairman of AstorMueller AG, the Swiss group that owns Bugatti shoes, talking about the brand started by his grandfather and his enthusiasm about launching in India in partnership with fashion e-tailer Jabong. The brand was launched on Saturday with Bollywood actor Arjun Rampal as the finale.

“There is a huge change in the market in the last five years,” observed Müller, who has watched the market closely for the last 27 years, since his first trip to India. “Earlier, you saw the interest of people in the traditional way, which I liked very much. It was very colorful. Recently, in the last five years there has been a big move toward casual fashion — that’s one of the main reasons we are here.

“I think online is a great way to go,” said Müller, talking about the huge gap in the premium segment in quality footwear in India, and his own company’s choice to enter India first, before China. “We love the online business because the customer reacts right away — they love red, blue, green slippers; they love high heels. We need that kind of response in today’s world. With regular retail it takes weeks and months to understand what the consumer really likes. We’re doing great online business in Europe as well, via Zalando, we are the biggest brown shoe sellers. We plan to grow in a big way. India is not just another market for us.”

Tahiliani, known for his drapes and couture, veered consciously toward what he described as the “democratization of fashion” with his new ready-to-wear line. “Couture is great — but as I get older, I’m loving real things, instead of the Indian fantasy,” said the designer, whose new TT.diy collection to be launched next year focuses on separates ranging from 4,000 to 18,000 rupees, or $60 to $270 at current exchange.

Masaba, who has made a niche for herself with her prints, made an interesting play with horse motifs, creating a variety of silhouettes. “There’s a saying that we become what we repeatedly do,” she said. “And here I am…consciously repeating myself. I see that the minute I do something different, people say, ‘This doesn’t have her signature print.’ I did florals one year and the reaction was, ‘We can get florals from 20 other designers, we want your signature prints.’ So I am taking my own niche and building upon it. I have realized that there are so many different things I can do within it.”

Buyers at the shows were mainly from India, although there were a large number from the Middle East.

“There’s a definite change in that buyers come to the event with bigger budgets and come to buy rather than borrow,” said Masaba, explaining that buyers would earlier take clothes only on a consignment basis but had now started purchasing outright.

Kanika Goyal, a young designer who showed for the second season on the Jabong stage, said she had numerous buyers still offering consignment basis, but she felt she had the luxury to be choosy. “There’s also a huge amount of publicity around LFW, which is helpful,” she said.

The shows marked the conclusion of celebrations of 15 years of Lakme Fashion Week, with 100 designers showing. LFW is organized by IMG Reliance Pvt. Ltd., a venture between Reliance Industries Ltd. and sports marketing and management company IMG Worldwide, in collaboration with beauty brand Lakme, a subsidiary of consumer goods company Hindustan Unilever. It focuses on the current season.