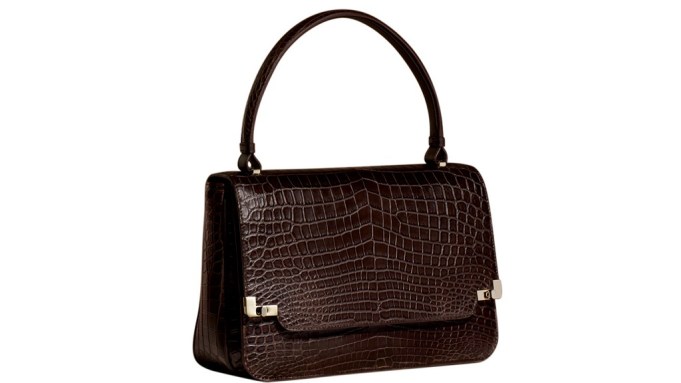 PARIS — A leather goods specialist established in Paris in 1876, Lancel boasts brand awareness in France approaching 100 percent, according to the company.

Cross the border and it’s a different story: Lancel has no retail presence in Italy, the U.K., Japan or the U.S., to name but a few important markets for luxury goods.

Fabrizio Cardinali, the company’s energetic new chief executive officer, is gearing up to remedy that situation, plotting a modernized product range and a communication strategy hinged on the brand and its heritage, shifting the focus away from French celebrity ambassadors like Isabelle Adjani, Laure Manaudou and Alice Taglioni.

During an exclusive interview at Lancel’s new headquarters in a 19th-century town house, Cardinali disclosed plans to name a new creative director, expand its footprint in fast-growing Asia, revitalize its travel business, expand assortments for men and ramp up its upscale offering in exotic skins.

“We have great potential,” Cardinali said, characterizing his mission as a “relaunch” of the brand, owned since 1997 by luxury group Compagnie Financière Richemont. “I think we have fantastic potential to bring this brand to the next level, to make it international.”

While declining to give numbers, Cardinali said about three-quarters of the Lancel business is generated in France, with the rest stemming largely from Asia-Pacific, Russia and the Middle East.

Roughly 80 percent of sales are done through its network of 90 directly operated stores and corners. Its only European location outside of France is on Boulevard de Waterloo in Brussels.

While Lancel has been logging growth the past five years, Cardinali allows that the brand is lagging behind its French peers. In the Eighties, Lancel was similar in size to Louis Vuitton, which — along with other storied 19th-century leather goods purveyors, Hermès and Goyard — is its closest industry peer, he said.

Indeed, Cardinali calls Lancel a “sleeping beauty” he plans to wake up with more contemporary products and by celebrating the brand’s rich history and legacy.

Given the market’s strong growth vector, China will be a key focus, he said, allowing that Lancel is no longer exposed in prime locations in Asia. Trips to the region meeting with top landlords — he has already made three since joining the company from Dolce & Gabbana last October — are key to remedying that situation, a process he allowed would take about 18 months.

“They’ve been responsive because the market is hungry for new leather goods brands, especially ones with strong heritage,” he explained.

Enlarging the selection of products for men is also vital for China, still a male-driven market. Flipping the merchandising focus to men at its Macau location lead to an immediate 25 to 30 percent bump in sales, Cardinali noted.

Modernizing the product ranges “with a twist of fashion” includes some upscaling of quality and pricing. He noted that 60 percent of the Lancel handbag business comes from products priced at retail from 600 euros to 1,500 euros, or $790 to $1,980 at current exchange.

Cardinali is also planning to develop the business in the Middle East and Europe.

Before Christmas, Lancel began offering customers in Paris and Moscow the chance to order bags in crocodile, ostrich, python or other exotic skins, yielding a strong consumer response.

A new print campaign that recently broke in Paris Vogue telegraphs the new Lancel image. Shot by Patrick Demarchelier at Lancel headquarters, it depicts a model whisking through a room wearing a white shirt and cream trousers, an L bag slung from her shoulder. “We need to bring freshness and more life to the brand,” Cardinali said.

The L bag, named after the shape of the gold hardware trimming the flap, retails for 1,290 euros, or $1,700. It reached stores in mid-March and “started very well,” Cardinali noted.

The clasp, first invented in the Forties, was culled from Lancel’s archive, which the house is cataloguing and enriching by combing auction sales. “I totally think we have a gold mine in terms of inspiration for designers,” Cardinali said.

Founder Angèle Lancel — who created her first handbag circa 1900 — had a penchant for uncluttered, ladylike styles loaded with hidden surprises, including unexpected compartments and accessories ranging from portable ashtrays to a bedazzled notebook.

In keeping with that legacy, the L bag boasts a zippered leather pouch inside that can be removed and employed as a clutch or an iPad carrier.

Lancel plans to name a new creative director in the coming months, following the resignation in February of its longtime designer Leonello Borghi, who is relocating to New York for personal reasons, Cardinali said.

Collections for fall 2014 and spring 2015 will be the first to completely reflect Lancel’s new design direction. Cardinali also noted Lancel would recalibrate its collection cycles to more closely match its global competitors.

Other initiatives include an overhaul of Lancel’s digital communication. A new-look Web site equipped for e-commerce is to be unveiled later this year, Cardinali said.