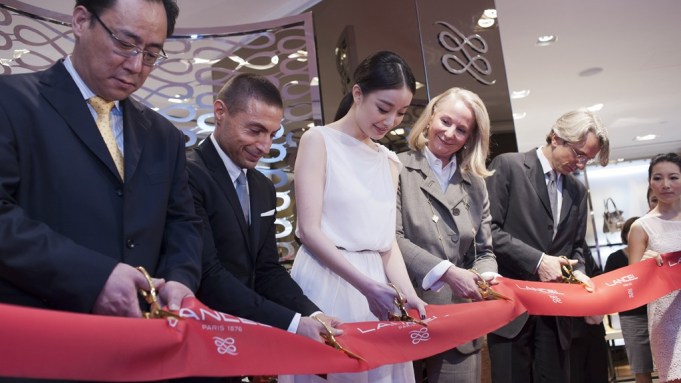 SHANGHAI — Lancel is upping its ante in China.

The French leather goods brand has been in China since 2004 and has eight stores in Beijing, three of which are now under renovation. Lancel marked the opening of its largest concept store in Asia on Tuesday, which is located in a historic building on Huaihai Lu, a high-end shopping street here.

The new store marks Lancel’s second unit in Shanghai, both of which are operated by Compagnie Financière Richemont, the brand’s parent company. The Beijing locations are run by Lancel’s franchise partner on the Mainland.

French architect Christophe Pillet, who created Lancel’s concept store on the Champs Elysées, was also recruited to design the two-story, 7,500-square-foot Lancel Maison in Shanghai, which features a Murano glass chandelier, a hand-painted stained glass panel and a special salon showcasing the Collection Daligramme, an exclusive line launched by Lancel in 2011.

“It [Lancel] is really considered a really good French brand [in China],” Borghi said. “We see from our Paris stores that we have a lot of Chinese consumers who come to shop, and then they come back and also go to our stores here.

As for future openings in China, Borghi said the brand will decide new locations on a “case-by-case basis to really see if it makes sense and if the location is right.”

Lancel said more events are slated for the brand on the Mainland in coming months; however, it declined to provide details of further plans.