A clutch of new men's stores has opened — or undergone refurbishment — on Savile Row and beyond.

By Samantha Conti and Nina Jones on June 5, 2014
View Slideshow 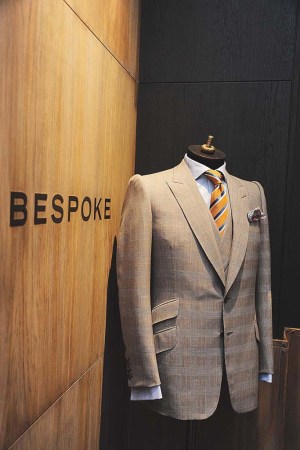 LONDON — The catwalks and showrooms here may be brimming with activity but so are the streets of Mayfair and St. James’s. A clutch of new stores has opened — or undergone refurbishment — on Savile Row and beyond.

This story first appeared in the June 5, 2014 issue of WWD. Subscribe Today.

On June 16, Kilgour will host a party in its soon-to-be-opened store at 5 Savile Row. The space, designed by creative director Carlo Brandelli, will shut following the festivities, and reopen again at the end of June with the fall collection. Brandelli, who rejoined Kilgour in January after leaving in 2009, won’t be presenting his spring collection on the official calendar, but will be showing pieces by private appointment.

A few steps away at 1 Savile Row, Gieves & Hawkes has completed a major refurbishment of its bespoke and made-to-measure rooms. There are gray stone floors, smoked oak paneling, brass, bronze and wrought iron fixtures — and even a bar for customers. Gieves & Hawkes has also given the store’s lobby a facelift, with touches of mohair and gray flannel — while the store’s famous map room is the next space to be tackled.

At 39 Savile Row, across the street from Alexander McQueen, footwear brand Gaziano & Girling has opened a 1,000-square-foot store. It is the first shop for the brand, which was founded by shoemakers Tony Gaziano and Dean Girling, and offers bespoke and ready-to-wear designs.

A short walk away, in St. James’s, Barbour International, Osprey London, and Tiger of Sweden have all opened flagships as part of the Crown Estate’s regeneration of the area. Later this month, Aquascutum plans to open a men’s-only Black Label store, the first of its kind in the U.K., also in St. James’s.

Come June 25, the London footwear label Mr. Hare will open its second store, a 254-square-foot space in London’s Notting Hill Gate, located at 178A Westbourne Grove, with its entrance on the adjacent Ledbury Road. The label already has a boutique on Stafford Street in London’s Mayfair, and the Notting Hill store will be near Matches on Ledbury Road, and Sandro and Zadig & Voltaire on Westbourne Grove. The label’s founder, Marc Hare, said he plans for the space to have a “clubhouse” feel, serving up coffee, rum and newspapers alongside his shoes and accessories.