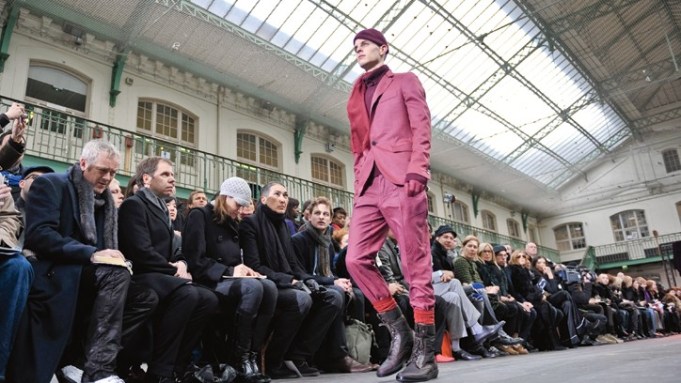 Thank goodness Alber Elbaz opens his mail. If he didn’t, Lucas Ossendrijver might never have joined Lanvin to become one of the fashion industry’s most celebrated men’s wear designers.

“I heard from a friend Lanvin was thinking of relaunching its men’s wear, and I always had respected Alber’s work,” recalls Ossendrijver, 39. “So I just wrote him a letter and said that I liked his work and that I would love to meet him and show him mine. A week later I had an appointment.”

Moved by the letter, Lanvin’s creative director—and the label’s owner, Shaw-Lan Wang—met with Ossendrijver over lunch. Wang got down to business studying the pages of Ossendrijver’s book, which included men’s wear he had designed at such houses as Kenzo and, under Hedi Slimane, Dior Homme. But Elbaz took a simpler approach: He went with his gut.

“I knew he had great experience, but above all it was a question of personality,” Elbaz says of his first encounter with Ossendrijver. “I can’t work with nasty people. I saw he had a strong personality, but I knew he was someone I could have a dialogue with.”

“He didn’t even look at my book,” Ossendrijver recalls. “It was very intimidating. He just looked me in the eye asked me questions, and it just clicked. That’s when it all started.”

And it continues. Season after season, Ossendrijver, in collaboration with Elbaz, has pushed the boundaries of traditional men’s dress, creating a singularly sophisticated look that culminated in Lanvin’s fall-winter 2009-10 collection; its grand finale was a young Barack Obama look-alike to underscore the design duo’s message of change. The collection recalled Elbaz’s breakthrough moments in women’s wear. Innovative silhouettes and soft, silky fabrics—uncommon in men’s wear—struck just the right notes of subtle refinement and Parisian nonchalance.

“The word we use to describe what we do is ‘fragility,’ where clothing is a little more delicate, a little more sensitive,” Ossendrijver says. “It’s emotional clothing.”

Sitting in his office atop the French maison’s 15 Rue Faubourg Saint-Honoré men’s flagship, Ossendrijver speaks fondly of his childhood in the small town of Amersfoort in the Netherlands, where he was expected to take over the family construction business. “But I always knew, more or less, my life would be somewhere else,” he says.

After attending the Academy of Art and Design in the Dutch city of Arnhem, where he earned a masters degree in fashion design, Ossendrijver and a handful of his classmates— including Viktor Horsting and Rolf Snoeren, better known today as Viktor & Rolf—organized a fashion show in Paris. This led to his first job, in the creative studio of the French label Plein Sud. “That was the trigger,” says Ossendrijver. “From there things began to fall into place.”

Not that it would be easy. By the time he joined Lanvin, its men’s business had lost some of its luster. It was eclipsed by Elbaz’s radiant women’s wear. “In the Eighties and Nineties, Lanvin men’s wear was very important,” Ossendrijver says. “There wasn’t a French man who hadn’t heard of it. But it lost a bit of steam. It needed to be revitalized,”

Elbaz explains that he had put the men’s business on the back burner while he concentrated on women’s. “Nothing is instantaneous,” he says. “It’s not like the smell of coffee.”

But now it was time, as Ossendrijver says, “to bring the men’s wear back to the same level as the women’s wear.”

With Elbaz’s guidance, he has done just that, building the men’s business to nearly a third of Lanvin’s revenues. Their partnership has also led to a revamp of Lanvin’s sprawling Paris flagship and the brand’s first men’s-only store, on London’s Savile Row, both of which bowed last year. “My brief was very clear. It wasn’t, ‘You have to develop this.’ It was more like, ‘We have to start again. We have to start anew. Let’s try to build a wardrobe for men today, whatever that may be,’” the designer says.

Like a mechanic, Ossendrijver takes apart each element of a traditional man’s wardrobe, then reconstructs it for Lanvin’s man of today. “I like it best when it’s complicated,” he says, citing standout pieces for fall including a tailored car coat—no shoulder seams, no shoulder pads but with raglan sleeves to “keep everything round”—and a formal evening coat made from jersey with “women’s wear couture constructions” such as front tailoring with sleeves cut to the body “so there are no visible armholes.”

Blurring boundaries between tailored clothing and sportswear comes naturally to the designer. “What’s important in men’s wear is the mix between formal and— I hate the word— casual,” says Ossendrijver, who’s wearing an indigo canvas double-breasted jacket from his last collection with jeans and his signature sneakers, a current must-have for the fashion-minded.

For Elbaz, collaborating on men’s wear is “much more relaxed” than creating a women’s collection. “I’m coming as a second eye,” he explains. “I can push forward or backward, but I am less emotionally involved. I give an opinion, which is much more rational.”

“Sometimes he gives me a women’s wear fabric in an unusual color for men, just to try, and it winds up liberating me,” Ossendrijver says, noting that he has learned much from Elbaz’s approach to lush fabrics and color sense. “As a designer it’s good to try new things because it takes you elsewhere.”

The designers meet formally three times a season, first to discuss inspirations and “just to talk,” then to review the prototypes and do a fitting, and finally, a week before the show, for the styling.

“There must be a dialogue, but at the same time you have to give the freedom fathers give their sons,” Elbaz says. “You have to let go sometimes.”

“We’re honest with each other….We do fight as well,” Ossendrijver says with a smile. “We are very opinionated— he is and I am— but we always find our way in the middle.”