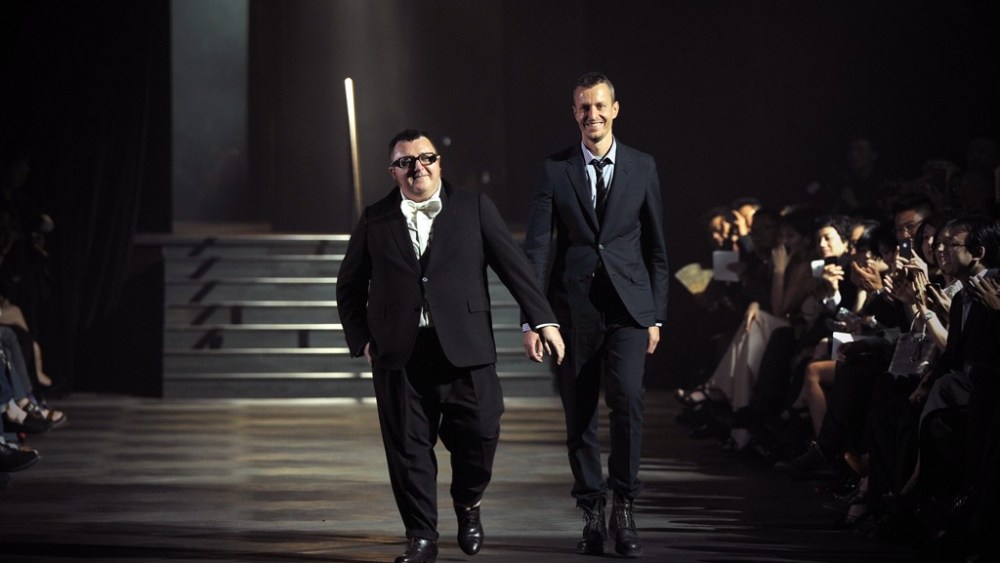 BEIJING — It’s been five years since Lanvin designer Alber Elbaz last held a show here, an eternity for the fast-developing Chinese capital. Back then, the trendy east-side development that now houses one of Lanvin’s two Beijing boutiques didn’t even exist, along with countless other skyscrapers now dotting the city skyline.

So there was, the designer said, a lot to catch up on in Lanvin’s fashion show here Thursday night.

“I don’t like retrospectives. I always feel quite wrong about doing retro. I am also very superstitious,” Elbaz said in an interview hours before the show, which was held to mark his 10th year at the fashion house. “What I wanted to do tonight is not to bring them a show and a price tag and a location and an address to say go and shop tomorrow….What we want to do tonight is to [bring] back the dream of fashion.”

Mainly drawn from the fall collection, ranging from the closely tailored to pieces dripping with jewels and feathers, the show also included some pieces from Elbaz’s recent archives.

The event — in which Elbaz repeated his end-of-show dance on the runway from the Paris show, though not his solo — was followed by an elaborate after party featuring May Day poles draped with flowers and waitstaff in Lanvin velvet jackets. It capped off an intense day that included a morning press conference with simultaneous Chinese translation and an afternoon, invitation-only signing of 40 copies of Elbaz’s 10th anniversary book.

Lanvin faces a hard sell in China, where its no-logo philosophy runs in stark contrast to the Chinese nouveau-riche taste for the largest, flashiest labels around. It’s also competing with less expensive luxury brands in a market where, despite a fast-rising middle class, the average annual wage in Beijing last year was still the equivalent of $8,900.

For the moment, while other foreign fashion houses are racing to open in China’s second- and even third-tier cities, Lanvin has so far focused only on the top-tier cities of Beijing and Shanghai.

“Our luxury is really sophisticated, elegant, refined, it can be sensual….For these you really need a sophisticated consumer, it is not one that approaches mass luxury,” said Thierry Andretta, Lanvin’s chief executive officer, who was in Beijing along with the fashion house’s president, Madame Wang Shaw-Lan. “[That market in China] is starting. It is the reason that today we are having stores only in the primary cities. We will move into the secondary cities soon, but nothing is yet decided.”

The label will add a fifth boutique to its Chinese operations next month when it opens a third shop in Shanghai Reel; Lanvin also has two boutiques offering ready-to-wear men’s and women’s collections in Beijing.

That’s not to say China is not a key emerging market for the brand. Lanvin has just unveiled a Chinese-language version of its Web site to accompany English, French and Japanese, and men’s wear designer Lucas Ossendrijver said Asian clients are accommodated with lighter fabrics and color choices to go with warmer climates.

Otherwise, Lanvin is Lanvin, even in Asia.

“For me, all women around the world are alike. They all like a red dress, they all like a bit of chocolate before bed, they all cry at the same things. I don’t see there is a difference, in the end, between an Asian woman and an American woman,” Elbaz said.