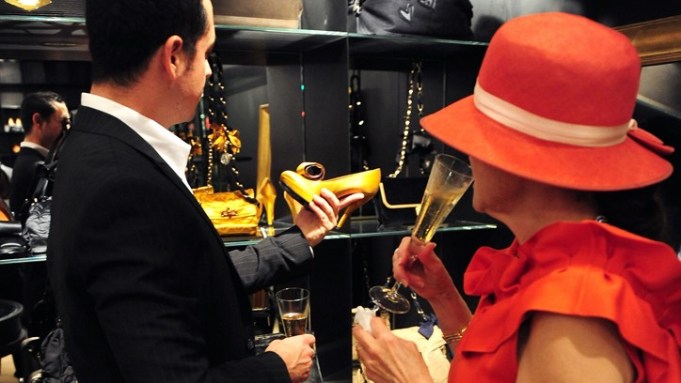 The grand opening party on Dec. 4, set to the tune of chanson française with miniature croque-monsieurs and tropical drinks served with umbrellas, a witty homage to its new hometown along with a Christmas tree decorated with parrot plush toys, managed to wrangle a chic crowd despite severe event competition.

“We think a sophisticated consumer exists here,” said Lanvin chief executive officer Thierry Andretta, predicting a strong mix of South Floridians and South Americans. “We don’t have major distribution in this region, so the market really needed a store.”

Regarding the unusual point of entry, he cited additional opportunities, like reaching a wide spectrum of international tourists and securing a coveted space in the luxury center. Due to its significantly smaller size for the company, the 2,100-square-foot boutique only stocks women’s wear and accessories, plus capsule lines for modern bridal, embroidered denim, loungewear, tailoring and long gowns, and items from the 22 Faubourg and 120th Anniversary collections. Andretta said the brand would consider opening a separate men’s store.

“We hit a saturation point with wholesale accounts throughout the U.S. in general, so we’re concentrating on retail,” he said of a slow growth plan that includes a men’s and women’s store scheduled to open in February in Las Vegas. “Our main retail areas of focus are China and the U.S.”

The day of the party, shoppers banged on the boutique’s locked doors, begging to buy merchandise before jetting home from Miami Art Basel. Those who were allowed a preview included John McEnroe and his wife, Patty Smyth. Saddled with a pre-collection deadline and four atelier assistants out on maternity leave, designer Alber Elbaz couldn’t make the opening event.

“[McEnroe] was very good at advising [Smyth],” said Alex Koo, director of merchandising, who dressed windows with a one-shoulder gown, and a matching cami and pant set in vibrantly colored washed silks. “We expect color and lightweight, travel fabrics to go over well here. We’ll definitely think about expanding into swimwear too.”

Described as an apartment where a woman can feel as comfortable as being in her boudoir, the store’s design has Versailles wood parquet floors, cement, and walls of mirror, blackened steel display cubbyholes and blown-up, vintage photos of Jeanne Lanvin. Antique chandeliers and benches in textured, black materials from wool to mink fur enhance the residential mood.

“We didn’t want it to be like other luxury stores that try to impress with intimidating, slick design. It’s more about showing off the clothes and creating an emotional setting here,” said Koo.