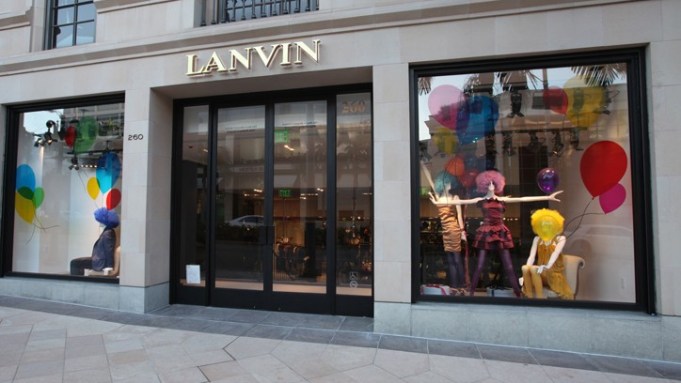 BEVERLY HILLS — Lanvin’s retail march across the U.S. has landed the French fashion house here, where it has assumed a place among Rodeo Drive’s collection of luxury brand stores.

The retail rollout builds on Lanvin’s momentum under the creative stewardship of Alber Elbaz that last year led to record revenues and inspired shopping frenzies at H&M with the collaboration Lanvin (Hearts) H&M.

At this stage in Lanvin’s development, Thierry Andretta, the firm’s chief executive officer, said he was “just looking at Rodeo Drive, because we think it is the best destination. We really want to stay where luxury is and where the comparative brands are with flagship stores.”

Elbaz has his own reasons for wanting a Los Angeles store and they have nothing to do with the Southern California sunshine. “L.A. is one of my favorite places in America,” he said in a phone interview. “There is something about old America that I still see in Los Angeles. It is always a pleasure for me to go back there because the people I know there are quite colorful and different and free-spirited. I am not interested in speaking about the weather. It’s cold here [in Paris] and it’s warm there.”

Lanvin is replacing Cole Haan’s Rodeo Drive location, which is close to Damiani, Jimmy Choo and the upcoming Agent Provocateur store. About one-third of the store’s 4,520 square feet of selling space is devoted to men’s. The store’s assortment includes handbags, priced at about $1,000 to $3,000, dresses, $1,300 to $8,000 and men’s suits, $1,995 to $3,000.Elbaz, who infuses each Lanvin store with elements befitting the locale, wove his vision of Los Angeles into the new store. Untreated parquet wood floors and shattered ivory paint on the wall link the store with the lightness of L.A.’s atmosphere. Art Deco chandeliers and furniture recalls Hollywood in the Thirties.

Still, there is an overarching Lanvin aesthetic that informs the Rodeo Drive unit. The juxtaposition of residential and industrial design is a key theme. Four lounge areas constitute mini sitting rooms in the store. Shelving for accessories is made from mirrors and brushed steel. Black-framed archival photos of models and Lanvin’s first Paris boutique remind shoppers of its heritage.

“It is about creating a store that is not enormous, but more intimate and friendly and personal,” said Elbaz. “That’s what I’m looking for as a [customer]. I don’t want to go into a megastore today.

Andretta said the Rodeo Drive unit should be profitable in the first year. Local shoppers will comprise about 60 percent of the customer base, with Chinese, Russian and South American tourists making up the remainder. Accessories will contribute around 60 percent of sales, in keeping with the trend in the U.S., which accounts for about 20 percent of Lanvin’s global sales.

Andretta said the pace of U.S. store openings will slow, but Lanvin is scouring New York for a possible men’s location. Meanwhile, as its retail focus shifts to China, a Shanghai store will open in a few weeks, replacing a previous unit. Andretta is planning at least two more units between Shanghai and Beijing by year’s end.

Besides its U.S. and Chinese operations, Lanvin has eight stores in Europe, five each in Taiwan and Hong Kong, and 50 franchised units, mostly in the Middle East and Southeast Asia. Retail accounts for 37 percent of sales; wholesale, 53 percent. The goal is for a 50-50 split. Andretta said Lanvin sells to about 80 department and specialty stores in the U.S. Lanvin last year grew sales in the double digits, posting 165 million to 175 million euros, or $219 million or $232 million at average exchange. “We think we will continue in 2011 with the same double-digit growth,” he said. “It is a moment where luxury is back.”