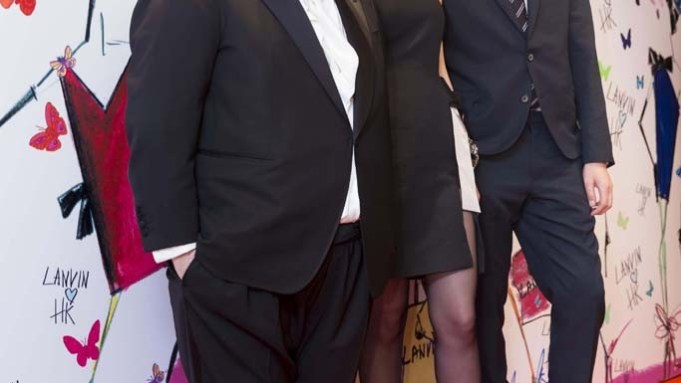 HONG KONG — Jet-lagged but chatty and in good spirits, Alber Elbaz visited Hong Kong for a few days to oversee and celebrate the opening of Lanvin’s new flagship, located in the city’s Central district.

Lanvin already has six other boutiques in the city, more than it does in Paris. The new store, at 5,380 square feet, carries a more comprehensive assortment of Lanvin’s offerings, including men and women’s ready-to-wear, accessories, men’s made-to-measure, bridal and children’s wear.

Like many other boutiques in densely packed Hong Kong, Lanvin’s new store is tucked away on the second floor. There is a generously sized entry area at street level with an Art Deco chandelier, wooden staircase and playfully arrayed mannequins that were, on opening day, arranged on shelves.

“Every store we have, we try to keep some of the DNA there, but we also try to bring a little bit of the city. None of our stores are similar. Here in Hong Kong, we have this entry and store upstairs. I tried to create differences between the men’s and the women’s,” Elbaz said in an interview the day before the festivities.

He worked with American architectural firm MR Architecture + Decor on the design and concept for the Hong Kong store. The unit is the fourth worldwide to feature the brand’s new retail concept, which Elbaz described as homey and comfortable.

“I wanted to bring the comfort of home with sitting areas and feeling that you’re not walking into a pharmacy or model agency,” he said.

With seven boutiques in Hong Kong and locations all across Asia including China, Indonesia, Japan, Singapore, Taiwan and Thailand, Lanvin is no longer a small fashion house. Elbaz likes to describe it as “human sized.

“It’s one of the most difficult things, it’s almost like being a teenager. What can you do in order to keep the dream but yet to move it forward,” he said.

Though Lanvin is expanding as a company, Elbaz is very much invested in keeping things intimate and personal.

“I think those days when a designer could do one collection with one idea are over. You don’t want to see the same dress because you know what season, you know how much and all your girlfriends have it. For me, it was the idea of making a French couture but in an industrial way so when I do a dress I don’t do hundreds of them. It’s almost this feeling of one-of-a-kind pieces,” he explained.

Elbaz was also very involved in planning the festivities. For the celebratory dinner, he chose the 75th floor of an office building. The locale, though striking with high ceilings and floor-to-ceiling windows, is not a common venue for events in Hong Kong.

Like its fashion shows, Lanvin’s Hong Kong dinner party featured a bit of fun. Hats were hung on strings over the tables so that the guests could look like they were wearing hats, without actually having to put them on their heads. Elbaz also drew and wrote notes on the tablecloths, to give a personal touch.