Lanvin melded the worlds of fashion and sport here by staging a fashion show at the Ryogoku Kokugikan sumo stadium. 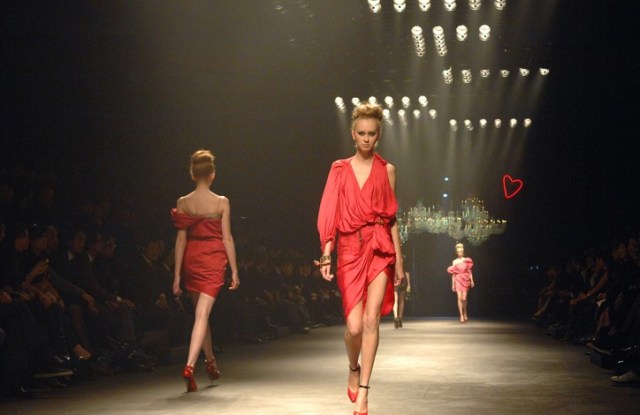 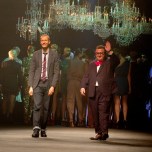 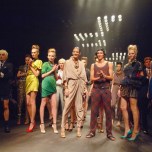 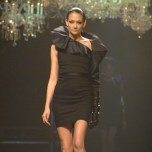 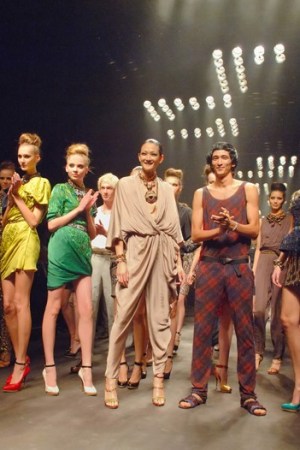 The Lanvin spring show at the Ryogoku Kokugikan sumo stadium in Tokyo.

TOKYO — Lanvin melded the worlds of fashion and sport here by staging a fashion show at the Ryogoku Kokugikan sumo stadium.

Wednesday night’s event, a reprise of Lanvin’s spring women’s and men’s collections, attracted more than 1,000 guests, including Kanye West, who camped out in the second row with his entourage and attempted to conceal his identity with a black hooded sweatshirt and a scarf covering his face. Ai Tominaga opened the women’s portion of the show in a black asymmetric dress with a ruffled collar and a glove on one arm.

Creative director Alber Elbaz said he and his staff considered several potential locations for the show, including museums and temples, but the sumo stadium appealed to him for two reasons: He’s a fan of the sport, and he couldn’t miss the chance to break a cultural taboo.

“First of all, I love sumo,” the designer shared over breakfast at the Park Hyatt Hotel. “I watch it on TV, and I think that sumo wrestlers are gorgeous.”

Traditionally, women are prohibited from entering the stadium’s center ring, which is considered a sacred space. But Lanvin managed to secure permission to build a runway and scaffolding on top of that very spot. A gyoji, or sumo referee, clad in emerald silk, read from a scroll to announce the start of the show.

Elbaz said he sees parallels between sports and fashion. By way of explanation, he also made a dig at celebrities looking to leverage their fame into clothing lines.

“They may think that all it takes to do fashion is to be famous,” he said. “[But] you have to devote your life. You have to work hard. Imagine if I tell you I want to be a ballerina….I mean, I cannot even jump two centimeters, but can I be in the opera and jump? No. So I let the ballerina dance and the chef cook and the actor act and designer design.”

Elbaz took a more sympathetic tone when it came to talking about one of his design peers and a Japanese fashion legend, Yohji Yamamoto, whose company earlier this month filed for bankruptcy protection. A group of private equity investors has assumed control of the fashion house.

“You know that is the saddest thing for me,” said Elbaz. “That after all these years, you end up in Chapter 11, and such a genius and such a talent. But I’m not worried about Yohji. I’m sure he will be wonderful.”

The Tokyo show coincides with the reopening of Lanvin’s refurbished and expanded flagship in Ginza and the brand’s expansion drive into Asia. Thierry Andretta, chief executive officer, said Japan represents only about 7 percent of Lanvin’s sales but it is registering double-digit increases despite poor market conditions for luxury goods. Last year, sales at Lanvin rose 29 percent to 140.4 million euros, or $206.6 million at average exchange rates, although Andretta said he’s expecting a slight decrease for 2009. Those figures exclude the sale of some Japan-only product lines produced by its local partner Itochu.

The Lanvin store is located on Ginza’s main strip near luxury players like Van Cleef & Arpels and Salvatore Ferragamo, as well as fast fashion labels Zara and Hennes & Mauritz. The changing face of Tokyo’s most luxurious shopping district doesn’t seem to faze Elbaz.

“This is what life is all about,” he surmised. “Tradition can be nice, but tradition can be dangerous if you go only with that because you don’t go forward.”

Elbaz said he hasn’t been approached about doing a collaboration with a fast-fashion chain but he would consider it if the right offer came along.