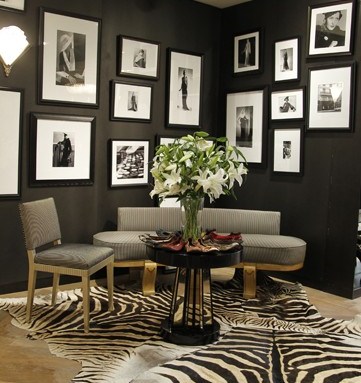 NEW YORK — “We’re the last designer house in the world that didn’t have a store in New York,” said Lanvin designer Alber Elbaz.

And now it has one. Lanvin is poised to open at the end of the week its first location here at 815 Madison Avenue near 68th Street. The store will occupy 3,550 square feet and the first three floors of a 6,875-square-foot, five-story town house. The two upper floors will become the company’s corporate headquarters in September.

“It’s about time,” Elbaz said by phone from France. “It took us four years to put it together. We’re really slow. I can’t tell you how proud I am” that the store is opening.

The designer said the raw space dictated in part what the finished store would look like. “I’m not very flagship oriented,” he said. “We don’t take a concept that we opened in Paris or Tokyo [and replicate it]. We have to go with the structure of the store and the architecture. Sometimes when I work with a fabric it has a mind of its own. I have to listen to the fabrics. Some are very stubborn. The easiest thing is to do a white box.”

Lanvin’s flagship is definitely not a white box. In the main display window, Schläppi mannequins, their white faces painted with red cupid’s-bow lips, hold birdcages. The ground floor resembles a residential apartment from the Twenties, the decade when the house’s founder, Jeanne-Marie Lanvin, was at the height of her career.

Floors are white and dark gray Carrara marble with a photo — a close-up of Madame Lanvin’s face — covering an entire wall. Glass and blackened steel vitrines hold accessories, and a selection of fur and animal print ready-to-wear hangs in a glass bow window wardrobe, including a tan fox fur jacket trimmed with gray grosgrain ribbon, $11,395, and a silk leopard print skirt. A nearby bench covered in black fox fur adds a decadent touch. Art Deco and Art Nouveau chandeliers can be found throughout the store, which has lots of mirrored surfaces. The old patina of fixtures is contrasted with modern track lighting and industrial spotlights.

Elbaz has a nontraditional sales philosophy. “In Paris I said [to the associates], ‘Please don’t sell,’” he recalled. “‘The only thing I would love you to do is help the women look beautiful. The moment they look beautiful, they will buy.’” When it was suggested that three dressing rooms may not be enough, Elbaz recalled saying, “I quite like it like this. It’s like a restaurant that is tight and you have to wait.”

But while Elbaz likes the cachet bestowed on restaurants where tables are hard to come by, “I don’t want to be like a hip, cool company,” he said. “I’d rather be relevant than cool.”

Dozens of archival photos in simple black frames of Jeanne-Marie Lanvin greet shoppers exiting the elevator on the second floor. An area outside the main room is devoted to footwear, with shoes and boots tidily displayed in black cubbies in a grid along one wall. Customers can try on styles such as beige python wedge-heeled booties, $2,060, in a small living room atmosphere replete with a striped settee, matching chair and black lacquered coffee table with mirror base.

An entryway lined with mirrors features glass shelves with necklaces from the pre-fall collection, such as one with satin ribbon and pearls, $755, and another with tulle-covered pearls, $4,245. More necklaces on black velvet hangers are displayed on an antique-looking rolling rack.

The main room has pickled parquet floors and 20-foot ceilings with a two-story Palladian window that faces Madison Avenue. Rtw and runway is mixed together along the walls, and glass bow-window wardrobes display outrageous furs, including a jacket of white astrakhan, beige fox and mink, long-hair goat fur on the cuffs and collar and grosgrain ribbon trim. A red fox vest with a black ribbon belt is $8,680, and a black Mongolian goat poncho, $8,745. Animal prints are big, rendered in print jacquard, silk, washed leather, taffeta and silk crepe.

“My dream when I started at Lanvin was to create this kind of luxury supermarket,” Elbaz said. “It would have everything you needed — T-shirts, bridal dresses, jeans, handbags, jewelry and shoes. I really believe the whole concept of going to a store when you need something. Women have enough. What I have to do is make their life easy. The product is all about dreams. In the store, everything is very clear.”

An idea that seems so simple — it’s a wonder no one thought of it before — is Elbaz’s bridal business, called Blanche. It was created three seasons ago when the designer decided to do “easy” bridal without all the fuss and fittings. He took his top runway styles and reproduced them in white. There’s a dress from fall 2008’s Coca collection, a gown originally designed in black lace, a tailored suit from resort 2011 and a long dress with a necklace embroidered onto the fabric from Elbaz’s first Lanvin collection.

A strapless silk gazar dress with a ruffle is $3,545, a strapless dress with a skirt of silk mousseline stitched like roses, $7,625, and a hand-embroidered long dress covered in hand-sewn ivory, gold and copper paillettes, $15,440. Best-selling Lanvin handbags have been reproduced in softer shades of leather, such as the Happy Bag, $1,755 for a small version, and the Amalia, $1,995.

Lanvin will continue to be sold at Bergdorf Goodman and Barneys New York. “Customers who went to Bergdorf’s or Barneys because there are personal shoppers and because they want to see a whole spectrum of different designers will still go to those stores,” he said. “The fact that we have a store in New York where we can show the whole Lanvin story is even better for [those stores]. It’s more about completing each other. The days of being in competition are over. There was a time when every designer used to hate other designers. These days, we send flowers to one another before a show and wish luck to each other. Bergdorf Goodman is doing extremely well and Barneys is doing extremely well. It’s OK that we’re there.”

Lanvin is planning to open a store in Beijing, Elbaz said, adding: “That will be the next project.” The company also has a store in the works in Los Angeles, but the timing is still not known. “We’re thinking of new stores,” said Elbaz, noting that Madison Avenue is the third U.S. store after Bal Harbour, Fla., and Las Vegas.

“So many women in America are wearing Lanvin. We have a beautiful following of women, famous and not famous.”