The Madison Avenue men’s-only boutique, slated to open in late September, is the first of its kind in the U.S. 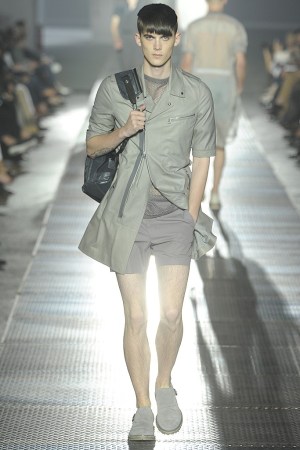 A little more than two years after planting a women’s wear flagship at 815 Madison Avenue in New York, Lanvin plans to open its first Stateside men’s-only boutique in late September.

The 3,500-square-foot unit, located one block south at 807 Madison and spread over three floors, is to showcase the French brand’s full product assortment for men, plus an array of made-to-measure suits, from sartorial to slim-fit.

What’s more, Lanvin plans to fly over its master tailor from Paris once a month to offer the elite bespoke service currently only available at its hometown flagship on the Rue du Faubourg Saint-Honoré here. Prices start at 6,000 euros, or $7,365 at current exchange rates.

“We think there’s an ideal customer base for this,” Thierry Andretta, Lanvin’s executive vice president, told WWD, describing a “sophisticated and wealthy” clientele in the financial capital.

Hermès and Ralph Lauren are among other luxury players on the renowned strip operating men’s and women’s units in close proximity.

Andretta noted Madison Avenue should boost the profile of Lanvin men’s wear in America, already its number-one market for men’s wear at wholesale. Italy is second.

Men’s wear will also get a ground-floor showcase in Lanvin’s forthcoming Chicago location: a 3,500-square-foot boutique slated to open in October on Oak Street. Andretta said women’s ready-to-wear and accessories would occupy the first floor, and noted the unit, formerly home to specialty retailer Ultimo, could expand to additional floors in the future.

The New York and Chicago locations are to be outfitted with the latest evolution of the Lanvin decor, masterminded by its creative director Alber Elbaz, Andretta noted.

Men’s wear represents about a third of the total Lanvin business. “I think we have a great opportunity,” he added.

Lanvin already operates three men’s-only boutiques in Hong Kong, plus one on Savile Row in London.

Andretta noted that Lanvin also recently opened a 940-square-foot pop-up for men in Malibu Village in California, just steps away from a women’s location.

He said he’s confident that seasonal unit will do well, given that Lanvin’s luxurious but fun brand ethos goes down well with Malibu’s well-heeled, surf-savvy population.