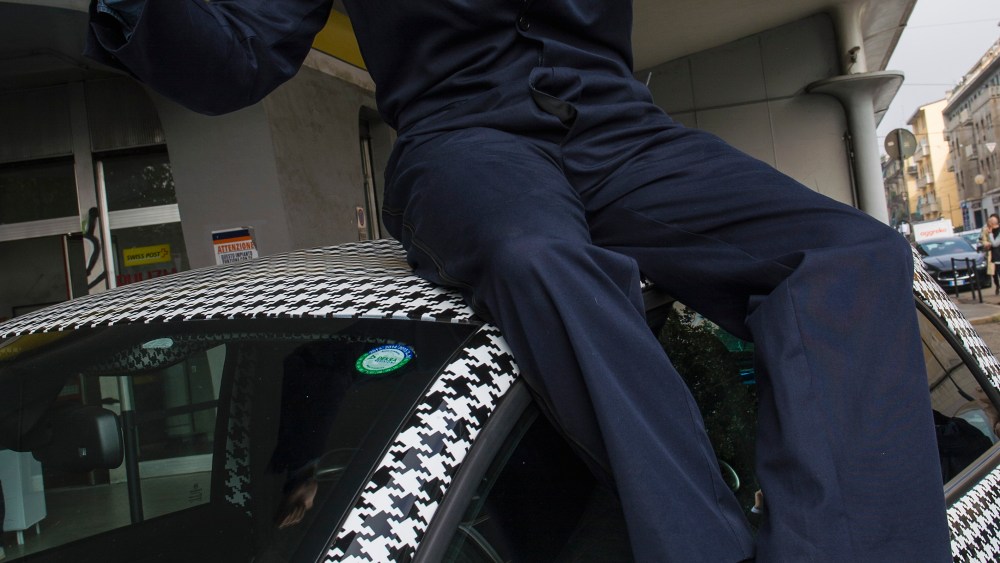 Lapo Elkann’s gift to himself on his birthday Wednesday was the official presentation of the building he is restoring to house his customization service project — Garage Italia Customs.

“I don’t like birthdays, I love to work during birthdays and there is no better gift I could have because this marks my return to cars, which is the world that I have always loved the most,” said Elkann, one of the Fiat heirs and grandson of the late Gianni Agnelli, wearing a jumpsuit with tuxedo lapels designed by Gentucca Bini, a Rubinacci tie and Adidas for Italia Independent sneakers.

Elkann is once again working with the team that created the Tailor-Made service for Ferrari, including Carlo Borromeo, offering unique customized variations in terms of leather, fabrics, colors and finishings to personalize cars, motorcycles, airplanes, helicopters and boats. Borromeo’s sister Beatrice, who is Elkann’s cousin; Bini; Luca Rubinacci; Beatrice Trussardi; Lapo’s sister Ginevra Elkann and her husband Giovanni Gaetani dell’Aquila d’Aragona; Raffaele Jerusalmi, ceo of the Italian Borsa; Andrea Tessitore and Giovanni Accongiagioco, cofounders of Italia Independent; fashion designer Marta Ferri, who is the wife of Carlo Borromeo, and Diego Rossetti of Fratelli Rossetti were among the guests at the event.

This is a personal investment for Elkann, who bought a historic former Agip gas station in Milan commissioned in 1952 by Enrico Mattei, who established the National Fuel Trust Ente Nazionale Idrocarburi (ENI). The gas station, designed by Mario Bacciocchi in the Streamline Moderne style, is a landmark in the city, but had been abandoned for years, and is being revamped by architect Michele De Lucchi. The venue is expected to open during Milan’s international furniture and design trade show Salone del Mobile. “This must become Garage Italia Customs’ home, it’s a symbol and a source of inspiration,” said Elkann, who launched the project in March. The young entrepreneur said that, since then, Garage Italia Customs has already personalized around 70 cars, two boats, two Agusta helicopters, a Learjet, and a Beechcraft King Air, among other things.

It is understood the company will work with firms ranging from Brembo and Ermenegildo Zegna to Loro Piana, Alcantara and Dedar for innovative materials. “There is a [Fiat] 500 outside that is a dégradé blue that has never been done before,” cited Elkann as an example.

Elkann explained that this will be a franchised business, comprising four companies: Garage Italia Customs, which is the operative part; a retail division; a licensing and merchandising segment “that can enter the apparel world,” and a food and beverage segment, with Italian chef Carlo Cracco. A restaurant headed by Cracco is expected in this first location.

Elkann said he is “in talks with more individuals” to expand. “There are people who want us in Miami, people who would like us in Dubai, or in Oman and Hong Kong,” he said. A firm supporter of Italy and Made in Italy production, Elkann said he believes this is a positive moment in the country “when there is the possibility to develop many [projects].”