Lavinia Biagiotti showed just how much she and her family-owned company care for Rome through a three-pronged initiative: A fashion show in the Italian capital, held on the evening of Sept. 13; an additional restoration project, and a collaboration with the city’s Teatro dell’Opera.

The goal, explained Biagiotti, was to further strengthen the company’s ties with the territory — always a priority, as her late mother Laura spearheaded the restoration of landmark sites in Rome, including the 11th-century Marco Simone castle where the company is based, and linked the name and the communication of several of the brand’s successful fragrances to the city, including the Roma scent.

The show was held on Rome’s Piazza del Campidoglio, a symbol of Roman Renaissance designed by Michelangelo Buonarroti on the Capitoline Hill,  home to the City Hall. Biagiotti has over the years contributed to renovation works of the sloping road designed by Buonarroti on the hill, as well as the fountains on Piazza Farnese, and will now support the restoration of another fountain, which stands on Piazza del Campidoglio, the majestic 16th-century Fontana della Dea Roma.

“By preserving such irreplaceable masterpieces, we feel we can overcome fashion’s sense of impermanence,” said Biagiotti.  “Actually, our goal has long been to create designs that can stand the test of time,” she explained, noting that she chose to call one of the brand’s perfumes “Forever,” as she did one of her collections.

Given the location, the spring 2021 collection showcased in Rome was presented under the “Roman Renaissance” moniker. While Milan, and in particular the city’s Piccolo Teatro, has been the stage of the brand’s fashion shows for years, Biagiotti decided to decamp to Rome for the first time. A previous show held in July 2004 in Rome, also at the Campidoglio, was not of a new collection, she clarified. A digital event for the brand will be held in Milan on Sept. 26 during Milan Fashion Week.

Mindful of the economic problems the COVID-19 pandemic has caused in a city heavily reliant on tourism, Biagiotti said she wanted to show in Rome to contribute to creating value and fanning business, providing jobs for local models, producers, and so on. The show, while compliant with health regulations, hosted about 100 guests. In February, Biagiotti showed her fall collection behind closed doors.

“The disruptive force of the pandemic has overturned our lives and business models, nothing can be like before and we decided we had to change, and this is a sign of rebirth, really like a Roman Renaissance,” said Biagiotti, thanking the mayor of Rome, Virginia Raggi, and the local authorities, who, in a complex scenario, “enthusiastically embraced the project.”

The designer, who is also chair and chief executive officer of the company, touted the synergy with the Teatro dell’Opera, which allowed its director, famed ballet dancer Eleonora Abbagnato, to perform and close the show. “What better way to restart with beauty, culture and fashion?” said Biagiotti.

The collection was an ode to femininity, with soft, fluid shapes. “I want women to feel free and comfortable,” said the designer, who added hidden pockets, even in evening gowns, “for their small secrets.”

Biagiotti did not veer from the brand’s staple white color, but added patterns with small flowers and flashes of fuchsia or bright green. This is also a reference to golf, as the Marco Simone Golf & Country Club in Guidonia will host the prestigious Ryder Cup, whose dates have been pushed back to 2023 from 2022, following the decision to move the 2020 U.S. edition to 2021 due to the pandemic.

There were also some prints of Roman statues, also lit up by cascades of Swarovski crystals.

Linen, silk and some cashmere pieces contributed to what Biagiotti described as a “long-lasting wardrobe, as it’s difficult to imagine our lifestyle in one year.” 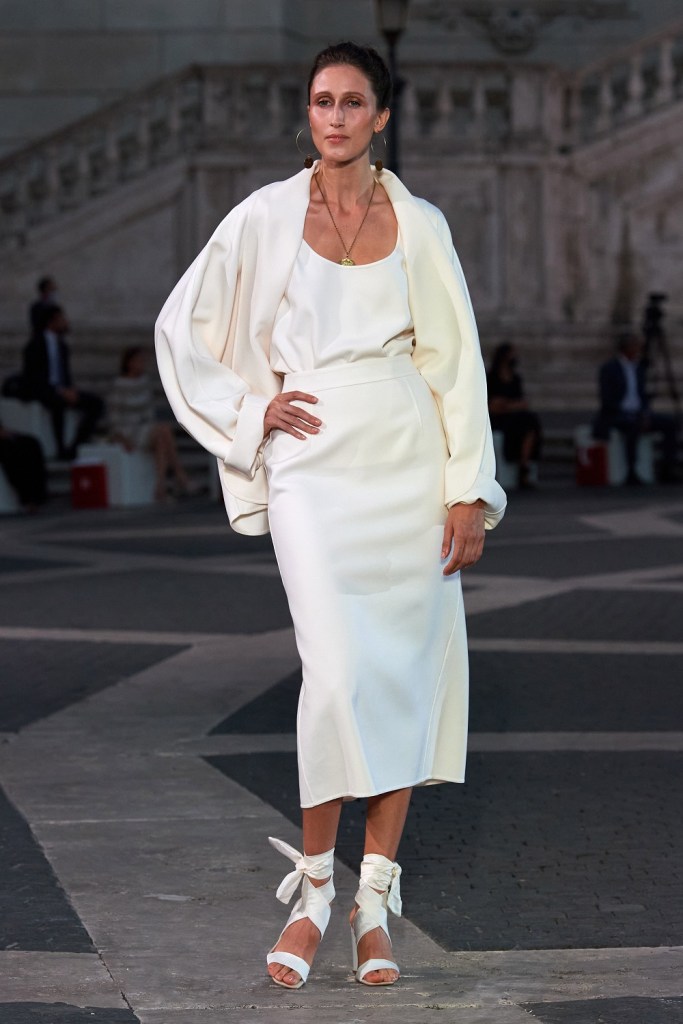