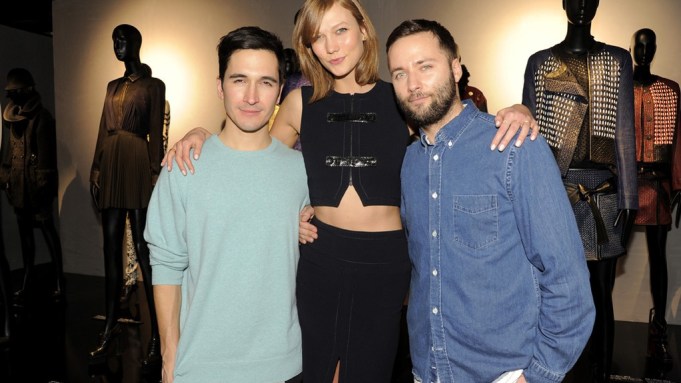 “We like to think that she’s this urban, fashion-conscious kind of cool girl. But it’s interesting, we were upstairs yesterday talking to the sales person in our area, and she said, ‘Actually, a lot of the older ladies that live in the 7th [arrondissement who] used to buy Chanel and Saint Laurent are now buying Proenza Schouler,’” Hernandez related.

“So it’s like these two worlds. And that for us is very interesting, how the brand has been transcending just one kind of person,” he added.

A Proenza Schouler corner opened at Le Bon Marché in July, and their 2,500-square-foot display on the ground floor of the department store incorporates 80 of their favorite looks, plus a short documentary showing their personal side. It runs through March 22.

The significance of the Paris spotlight, which also spans 10 windows on the Rue de Sèvres, is not lost on the New York-based duo.

“It’s pretty incredible to see those windows and, like, our name plastered all over the street in Paris,” McCollough said. “I mean, this is where Coco Chanel and Christian Dior, Cristóbal Balenciaga, all these incredible talents were born, and obviously great talents today [are] working here, so to be here and to have our brand’s presence in such a way feels in a way like, I don’t know, maybe we’ve, like, made it!”

Lisa Attia, commercial director of Le Bon Marché, said Proenza Schouler was perfectly in line with the store’s positioning. “Like us, they operate at the crossroads of the avant-garde and craftsmanship excellence,” she said.

“I love what they do. They have an amazing talent — just look at the fabrics,” Delphine Arnault, the daughter of LVMH chairman and chief executive officer Bernard Arnault, said at a cocktail party on Wednesday evening to celebrate the exhibit.

Now second in command at Louis Vuitton, she is also in charge of scouting young talent for the conglomerate. “We’ve been following their work for a while,” the executive said, sidestepping questions about a possible business interest in the brand.

The party featured a performance by Ariel Pink and Tim Koh, who admitted he wore women’s clothing on a regular basis. “I’m thin, men’s clothes don’t fit me,” Koh explained.

Pink confessed he was not much of a shopper. “I have never bought a piece of clothing in my life, people just give me stuff,” he said.

Liya Kebede, who has sported many of the exhibited looks on and off the catwalk, said she wanted to expand with her brand Lemlem in Europe this year. Meanwhile, Arizona Muse has moved the opening of her organic juice bar in Paris to September. “We are still scouting venues,” the model said.

McCollough and Hernandez have also been discussing possible locations for a future freestanding store in Paris. They have two units in New York — one on Madison Avenue and one in SoHo — and they will open their first overseas boutique in Singapore in April.

“We’ve never wanted to focus only on U.S. distribution, because then you get pigeonholed as this American designer. And we’re Americans working in America, but we like to think that our designs kind of transcend that on an aesthetic level, but also with our business approach,” McCollough said.

Talks so far have centered on the Right Bank.

“But who knows? For us, it’s so much about the space. We don’t mind if it’s a little off the radar. I mean, it can’t be inconvenient, but it’s more important for us to find a really great space with cool bones and something that we could do something interesting architecturally with,” he added.

Opening a store in Paris could also present an opportunity to show in the French capital, daunting as the prospect may be, McCollough continued.

“If we were opening a store out here, it would make sense to show here one season or something, just to kind of bring a different type of exposure to the brand. Paris is very much like an international hub for fashion. People come from all over the world to Paris for the shows. A lot of people come to New York, but it’s not like it is here in Paris,” he mused.

Over the last two years, Proenza Schouler has concentrated on improving its product assortment and deliveries. Now it is shifting its attention to retail expansion.

“Right now, our focus is shoes, bags and ready-to-wear, really growing that and growing the distribution, opening more stores. That’s kind of like our immediate plan. And then we’ll sit down and reevaluate a year or two from now and see where else we want to evolve in,” said McCollough.

“The idea of men’s wear could be interesting. We’d approach it very differently than we approach our women’s,” he added.

In the meantime, the brand is preparing to launch a limited-edition color cosmetics collection with MAC Cosmetics in April, and McCollough and Hernandez are mulling working on another short film, following two collaborations with director Harmony Korine.

For now, they have an even more pressing concern — taking a vacation.

“We’re going to Africa — Tanzania, Zanzibar, and we’re going to go on a safari, get lost out in the Serengeti,” said Hernandez. His partner looked doubtful. “Hopefully, we don’t get lost. I don’t want to get lost,” McCollough said.