EXCLUSIVE: The Next ‘League of Legends’ Champions Will Wear Louis Vuitton

The companies discuss the new partnership that includes skins for "League of Legends" avatars and a trophy case for the World Championship.

By Joelle Diderich and Obi Anyanwu on September 23, 2019

A rendering of Louis Vuitton's trunk for the League of Legends World Championship Summoner's Cup.

Louis Vuitton’s collaboration with skate brand Supreme marked the moment that streetwear burst into the hallowed halls of luxury fashion. Now the brand hopes to break down another wall by joining forces with Riot Games, the maker of the popular multiplayer online video game “League of Legends.”

The world’s biggest luxury brand has inked a two-year partnership with the U.S.-based e-sports organization ahead of the League of Legends World Championship tournament, which kicks off in Berlin on Oct. 2 and ends in Paris on Nov. 10.

As part of the deal, described as the first of its kind, Louis Vuitton will launch champion skins — the items players use to change the appearance of their avatar — and a capsule ready-to-wear collection, both designed by women’s collections artistic director Nicolas Ghesquière.

In addition, Vuitton has created a trophy travel case to hold the Summoner’s Cup, the prize awarded at the end of the League of Legends championship. To be unveiled at a press conference at the Eiffel Tower on Nov. 8, it won’t be anything like the cases the brand has made for the FIFA World Cup in soccer or the America’s Cup in sailing.

“It’s the biggest trophy case we’ve ever designed in our 163 years. It will be impossible not to see it. It will be unveiled like no other unveiling has ever occurred,” Michael Burke, chairman and chief executive officer of Louis Vuitton, told WWD in an exclusive interview.

“There is a real trophy, but everything surrounding it is, of course, intangible — it’s digital,” he said of the planned presentation ceremony. 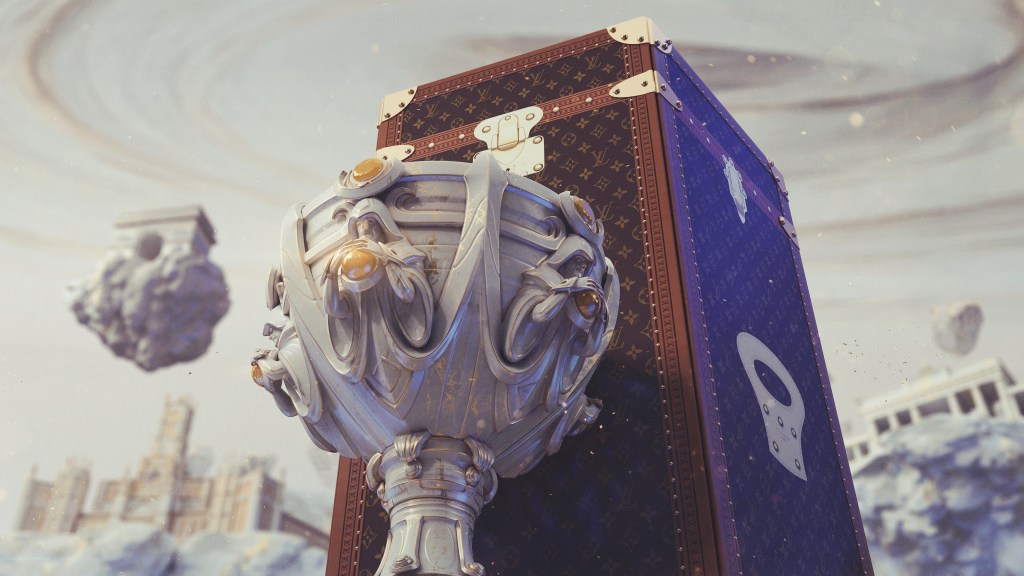 Louis Vuitton has made a trunk for the League of Legends World Championship Summoner’s Cup.  Courtesy

Naz Aletaha, head of global e-sports partnerships for Riot Games, said the case features the LV monogram pattern alongside “high-tech elements and state-of-the-art technology that will be really compelling to fans.” Further initiatives will be rolled out as the next League of Legends championship gets under way.

“We’re really excited and we’re honored to be working with Louis Vuitton,” she said. “This is a first of its kind partnership within e-sports, and what’s really exciting is it’s a multifaceted partnership.”

Burke hopes the event will reach up to 300 million eyeballs, reflecting the enormous reach of e-sports, despite its relative lack of exposure to the mainstream public.

“The final will be watched by 100 million people minimum, so the number of people that will actually be exposed to this is going to be a multiple of how many viewers watched the final. This is going to go viral,” he predicted. “It’s going to be an eye-opener for hundreds of millions of people.”

“League of Legends,” released in 2009, is free to the public, offering champions, kits and skins for purchase. It will celebrate its 10-year anniversary on Oct. 15 with a live-streamed event, and has unveiled a new logo. “What’s happened over that decade is it evolved into this overall lifestyle,” said Aletaha.

The first League of Legends World Championship was held in 2011 in a conference room in a hotel in Sweden during production company DreamHack’s Winter 2011 event, to a live audience of 50 people and two million viewers online. The 2018 World Championship in South Korea had an audience of almost 100 million people.

“We’re the largest e-sport in the world,” said Aletaha. “From our perspective, e-sports and gaming as a whole are really starting to get to the same scale — they’re essentially on par with traditional sports properties, as well as entertainment properties.”

Traditional sports teams like the NBA’s Golden State Warriors and Houston Rockets, and Turkish soccer clubs Fenerbahçe and Beşiktaş, have invested in League of Legends teams. The game has also appeared in TV shows like “Ballers” and “The Simpsons,” and was the subject of an episode of the Netflix series “Seven Days Out.”

Burke thinks e-sports will mirror the trajectory of skateboarding, which in a decade went from subculture to mainstream sport, and is due to make its Olympic debut at the Summer Games in Tokyo in 2020. (Intel plans to host the first global e-sports competition with opposing national teams in Tokyo around the same time.) “Skaters were one generation. The next generation are e-gamers,” Burke said.

In a report last year, Goldman Sachs predicted that by 2022, the global audience for e-sports will rise to 276 million, similar in size to the NFL today, versus an estimated 167 million people in 2018, based on data from Newzoo, a consultancy providing market intelligence in the sector. Asia accounted for around half of those watching.

Revenues, meanwhile, are set to reach $3 billion by 2022, compared with $655 million in 2017, Goldman Sachs estimated in the study titled “The World of Games: E-sports: From Wild West to Mainstream.”

The investment bank noted that professional e-sports teams practice for up to eight hours a day, have coaches, trainers and nutritionists on staff, and receive a base salary, like other pro sports leagues. But unlike traditional sports, players don’t need a specific physique or access to a specialized venue.

“Therefore, we believe professional video-game play can be appealing to a massive global audience of people who can watch and learn from pros and try to improve their own game play — something we believe isn’t as possible for most traditional sports fans,” it said.

“And because the distribution of e-sports is nearly 100 percent digital, fans can stream e-sports content for free anywhere in the world,” Goldman Sachs added, citing online video platforms like Twitch, YouTube, Douyu and Huya.

The apparel industry is starting to take notice. Adidas, Puma, Snipes, Undefeated, Jack & Jones, Giorgio Armani and Nike have all done sponsorship deals with e-sports teams; Champion and New Era have a line of fan gear for e-sports players, and K-Swiss has designed two sets of e-sports shoes.

The League of Legends World Championship has sponsors such as Mastercard, Kia for the LEC European league and Nike, which produces the uniforms for Chinese league Tencent LPL. The company is also doing a streetwear line with the League of Legends and brought gaming professionals to its Beaverton, Ore., headquarters for performance training.

He noted that while each platform has its own way of engaging fans, Riot Games was the most innovative and daring, in his opinion.

Aletaha said Riot produced music for “League of Legends” across genres including heavy metal, ballads, rock, hip-hop and K-pop. It has released a companion book, “Realms of Runeterra,” and partnered with Marvel on comics for popular champions Ashe and Lux. “Fashion becomes a very natural next step,” she said. 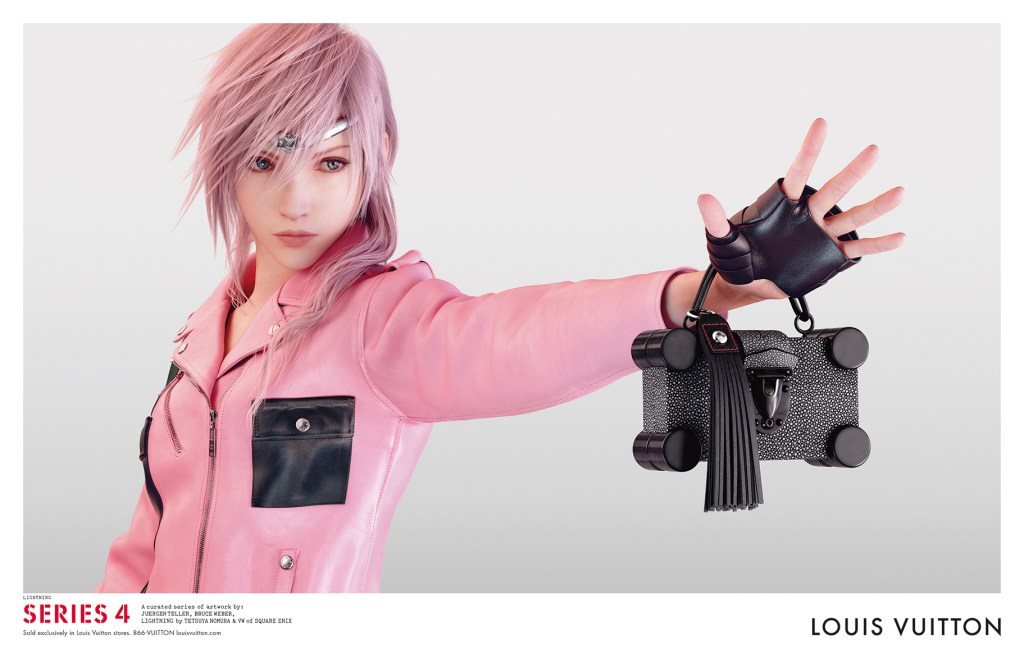 Burke said Ghesquière was immediately on board. “Nicolas is into sci-fi, he’s into futuristic worlds, he’s into avatars,” he said, adding that Ghesquière was the first to use an artificial human being in a fashion campaign, enlisting the Final Fantasy character Lightning for Vuitton’s spring 2016 ads.

Burke noted that although only one-third of gamers are women, many male gamers choose female avatars. The skins designed by Ghesquière will be awarded as prizes to the best competitors, while the capsule clothing collection will land in stores and online in December. Burke expects it to appeal to both gamers and nongamers.

“A number of clients will be clients that want to learn about something that they’re not aware of. This is going to open up the gaming world to a lot of people who had no idea what the gaming world was, and they want to engage with that world because it’s an authentic world. It’s at the beginning,” he said.

Whether gamers ultimately convert into Vuitton customers is not important, he argued.