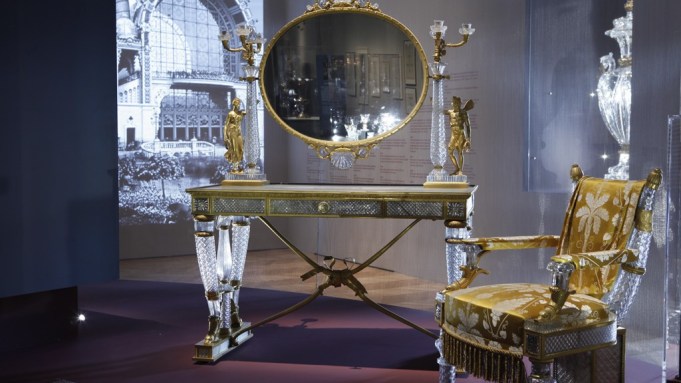 Long before television, the Internet and megastores, universal expositions were the chief vehicle to spread the word about luxury goods.

That’s the focus of an exhibition opening in Paris on Wednesday, charting how such showcases propelled French crystal maker Baccarat, marking its 250th anniversary this year.

The show at the Petit Palais, a Beaux-Arts building constructed for the 1900 expo, groups more than 500 objects, some from major French museums. They range from delicate muslin goblets to imposing candelabras and chandeliers, the largest twinkling with 250 lights in honor of the milestone.

The retrospective offers a sweep of history through crystal, a material that fascinated and seduced royals, heads of state and aristocracies around the world, and one that absorbed and exalted the fashions of the day.

Founded in Lorraine in 1764, Baccarat even predated world’s fairs, and began displaying its know-how at national exhibitions of industrial products in France, introducing its first lighting elements in 1827 and its first colored crystal in 1839.

The latter includes Baccarat’s famous red, realized with 24-karat gold powder, and lesser-known shades like fluorescent yellow, incorporating uranium and collected with fervor in Japan, according to Michaela Lerch, Baccarat’s head of heritage, who cocurated the exhibition with Dominique Morel, head curator at the Petit Palais.

A walking encyclopedia about crystal innovations, Lerch led a tour of the dimly lit show, where vessels, furniture and lighting fixtures glow enticingly. Along the way, she enumerated a string of firsts, such as the first crystal furniture in 1819, including a vanity made for the Duchesse de Berry, on a rare loan from the Louvre.

Innovations in technique appear throughout the 19th century — millefiori, filigrane and flat cuts among them — widening the possibilities for such clients as French King Louis XVII, who ordered a set of glasses in 1823, popularizing the haute tableware and setting in motion a tradition that endures today among French leaders.

While some objects dazzled by their scale — consider a 23-foot-high crystal fountain — others are marvels of intricate engraving, as is the case of a pair of vases that took Jean-Baptiste Simon two years to realize in time for the 1867 expo.

“This is the idea of perfection of details,” Lerch said, letting a visitor gaze within inches of Simon’s etchings, fine enough to register a spider web amidst allegorical scenes representing fertility and water.

While the scope of the exhibition predates Baccarat’s foray into jewelry, there are ties to fashion in the perfume flacons commissioned by Christian Dior, and objects owned by such figures as the Duke and Duchess of Windsor, Princess Grace of Monaco, Aristotle Onassis and Josephine Baker.

A series of thematic rooms culminates with the Art Deco age, when Georges Chevalier collaborated with Baccarat and created chandeliers of cascading crystals resembling fountains, and minimalist vessels that could have been created yesterday.

“Baccarat: The Legend of Crystal,” runs through Jan. 4. A companion show at Baccarat’s Paris headquarters showcases designs after 1937.