Les Bains is Back, and Better than Ever

The legendary Paris club has reopened after closing in 2011 for renovations. Already, it's the toast of the Paris fashion scene. 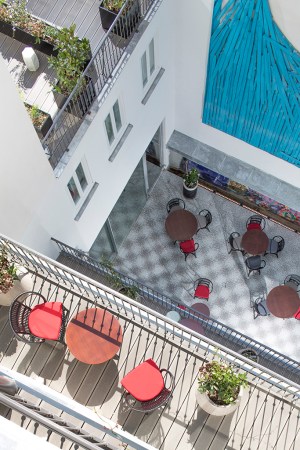 Les Bains is back at last — and some things seem not to have changed one bit. Certainly not Marie-Line, the same no-nonsense blond bouncer who greeted (and rejected) patrons of the celebrated Paris club for three decades before it closed for renovations in 2011. She was there as if it were just another night on June 4 for the reopening of the club with the likes of Ellen von Unwerth, Cécile Cassel and Gildas Loaëc.

Then there is the famous pool where the hip and well-known once plunged in with wild abandon. These days, the scene is a bit more orchestrated and orderly: the pool is separated from the club by a partition to prevent partygoers from pushing their companions into the glittering waters, as was the tradition in the club’s heyday.

The partition is one of a handful of concessions the club has made to the passing of time and a night life scene light years away from 1978, when Les Bains-Douches first opened.

“I cannot tell you the stories,” said Lenny Kravitz recently. He used to come to Les Bains in the Nineties with the likes of Vanessa Paradis and Prince, who would sometimes stage impromptu concerts. “What happened in Les Bains stays in Les Bains.”

One can only imagine. Yet the creators of the new Les Bains have managed to pull off a whimsical reinvention of a bygone era, one that is attracting the fashion world again. Nicolas Ghesquière, Olivier Rousteing, Raf Simons, Riccardo Tisci, Kris Van Assche and Kim Jones are among designers who have warmed up the new place in the last few weeks.

Les Bains has been attracting an arty following dating back to its beginnings as a luxury bathhouse in 1885, when Marcel Proust was a frequent guest. By the Eighties and Nineties, the likes of Andy Warhol, Grace Jones, David Bowie, Robert De Niro and Mick Jagger all partied in the Parisian counterpart of Studio 54. Way before her time as France’s First Lady and wife of Nicolas Sarkozy, Carla Bruni was a regular. So were Farida Khelfa, Naomi Campbell and Eva Herzigova.

In the late Nineties, David Guetta became the resident DJ, mixing every night. In 2011, Les Bains was forced to close as the building was on the verge of collapsing, but it wasn’t long until current owner, filmmaker Jean-Pierre Marois, came to the rescue.

After four years of renovation and a revamp costing 13 million euros, or $14.6 million at current exchange, Les Bains is finally back with 39 hotel rooms, a restaurant, a club and a soon-to-open concept store. The hotel opened on March 24, and the building has been taken over for a few events since then, including a Dior after party during Paris Fashion Week and parties hosted by Tommy Hilfiger and Givenchy.

The new Les Bains has maintained its heritage: The facade remains untouched; a former water tank which was used to supply Les Bains Guerbois’ bath house has been converted into a private dining area, and the replica of the legendary pool, combined with an adjacent steam room, make a spa for hotel guests during the day.

The interiors of the 39 guest rooms and suites were entrusted to designer Tristan Auer, who is also involved in the current renovation of The Hôtel de Crillon. Each suite is equipped with a steam room, with some having a replica of Warhol’s sofa at the Factory and showers on the balconies. Prices range from 490 euros for a room to 1,800 euros for a suite, or $540 to $1,983.

For Marois, reopening Les Bains is like a return home. In  his own words, he was “baptized” in Les Bains. His father, a distinguished professor of medicine, owned the place. As a child growing up in the wealthy Neuilly-sur-Seine neighborhood, in the western part of Paris, he would hear about the family building on rue du Bourg-L’Abbé, near Les Halles, the “belly of Paris.”

When he turned 15, Marois’ father let the lease to Fabrice Coat, a young antique dealer who turned the place into a club named Les Bains-Douches and hired Starck to design the space. For the young Marois, partying there was more of an education than school, he thought. He would mingle with the likes of Warhol, Jean-Michel Basquiat and Julian Schnabel, and attend live performances by Joy Division and Simple Minds.

In 1984, Hubert Boukobza bought the place and hired members of the former Palace dream team including Sylvie Grumbach, who started “Les Venus de la Mode” in the late Eighties, at the end of each collections season to give away awards, like the best show invitation and the best model. Azzedine Alaïa, Claude Montana, Christian Lacroix, Jean Paul Gaultier, Karl Lagerfeld and John Galliano were among those who attended.

“People weren’t going out to be seen,” Grumbach said.

“I miss that in Paris,” echoed Kravitz. “That was always a fun attraction. I used to see all the artists and designers, like Thierry Mugler. It was a place to get together and party. You can never have that kind of privacy [nowadays]. There were paparazzi but not everybody was a photographer then.”

“We were shooting celebrities at close range,” said Foc Kan, who was one of the photographers whose archive shots (including of Kylie Minogue with Gaultier and of Victoire de Castellane with Lagerfeld or of Jack Nicholson with a French flag on the cheek) serve as a reminder of Les Bains’ glory days.

On June 4, Kan was asked to leave his camera at the entrance. Partygoers, meanwhile were instead taking pictures of the pool with their cellphones to post on Instagram.