The appointment is effective with the fall collection that bows on Feb. 21 in Milan. 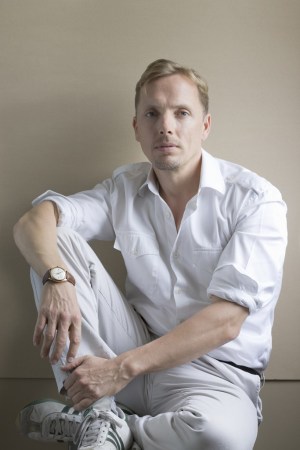 MILAN — Les Copains has tapped Graeme Black as creative director, effective with the fall collection that bows on Feb. 21 in Milan. That evening, the Italian company will also unveil its new boutique on Via Spiga as part of a strategy to reposition the brand.

This story first appeared in the February 11, 2014 issue of WWD. Subscribe Today.

“His significant skills and sensibility in researching and developing knitwear were immediately a draw,” Les Copains president and chief executive officer Luca Bertolini said of Black, who signed on for two years. Bertolini said Black is interpreting the brand’s core knitwear business with a contemporary edge. “His view of a refined and chic woman reflects the brand’s DNA,” continued the executive, who recounted that the designer’s first internship was at Les Copains, after graduating in fashion design from the College of Art in Edinburgh.

Black began his career in the early Nineties, working for John Galliano and Zandra Rhodes. He then moved on to work for Giorgio Armani, designing the Black Label collection. In 2001, he became creative consultant for Salvatore Ferragamo, and in 2005 launched his own label, which he has discontinued. He also has served as creative consultant for the Boss Black women’s collection. Black is now creative director of Chinese luxury brand Erdos 1436 and will continue to design for that label.

Les Copains was launched 60 years ago by Mario Bandiera, founder and chairman of parent company BVM SpA, based in Bologna, Italy. The brand has a history in fine knitwear. Over the years, Les Copains has worked with designers such as Antonio Marras, Antonio Berardi, Albino d’Amato and Alessandro Dell’Acqua. Last summer, Les Copains called on Bertolini to restructure the company. “We are working on internationalizing the brand and over the past few years have very much focused on retail,” the ceo said.

In November, the company opened a 3,240-square-foot boutique on Rome’s Via Borgognona with a new concept “to add visibility and show the new course of the brand,” said Bertolini. The unit on Via Spiga will cover 810 square feet and counts three windows on the street. Another Les Copains store on nearby Via Manzoni will remain open. “We may dedicate it to pop- up stores or art initiatives,” said Bertolini. In addition to stores in Florence and two in Moscow, a boutique will open in Saint Petersburg, Russia, in the spring. Bertolini said he is “looking for a location on New York’s Madison Avenue” and is “negotiating a location in Hong Kong.”