Lilla P: How One Independent Lifestyle Brand Is Managing

Pauline Nakios is working closely with specialty stores, doing revenues shares and innovating as she navigates through the crisis.

A fall look from Lilla P.

Small independent brands have found that by partnering with their specialty store retailers they are able to ride out some of the challenges they are facing during the coronavirus pandemic.

Pauline Nakios, founder and creative director of Lilla P, a New York-based lifestyle brand that specializes in comfortable and casual sportswear, has been working with her key specialty stores to come up with innovative ways to sell spring merchandise.

For the past month, Nakios has been managing her 22-year-old company remotely. She and her family flew down to her hometown, Charleston, S.C., where they have a home, and have been running the company from there. Her husband, Thomas Nakios, is her business partner, has a finance degree, and for the past few years has set up the business with a lot of systems “that are very useful in times like this,” she said. Her staff is also able to work remotely.

For the first week or two, they grappled with, ”Is this real?” and then realized “it’s real and we had to make hard decisions.” Last year she had brought in an HR consultant “who was a savior.” They took a look at what’s essential right now “not to let 22 years of hard work slip through their fingers.” First, she eliminated three full-time positions and closed their store in the Meatpacking District. Nakios said she won’t be reopening the store anytime soon, and the lease is up at the end of the year. (They will retain their offices, which are in the same building.) Originally it was “amazing” to have that kind of visibility in the Meatpacking District, but the neighborhood has “changed dramatically” since the store opened in 2012, she said.

After letting several people go, Nakios took on more of the social media and marketing responsibilities, took some webinars and started talking to customers to ensure the online messages were in her voice. Lilla P has 17 employees, 15 in New York and two based in Virginia, all of whom are working remotely. Some of the remaining employees had to take salary reductions but she said they are happy to have a job. “We’ll adjust them back once things turn around,” she said. She noted that she had finished all spring 2021 development. Sweaters are being made in China, cut and sewn are manufactured in Peru and wovens are made in India. She said China is back up and running, and India and Peru are completely shut down.

Although several stores have tried to cancel orders, she keeps reminding them that it’s a partnership. “You just can’t do that. The partnership will be the key here,”  said Nakios. Seventy five percent of her business is through wholesale channels, and the remainder is direct-to-consumer. Among her numerous specialty store accounts are Simply Meg’s, in Greensboro, N.C., A Line in Denver; Paisley boutique in St. Louis; Twisted Hearts in Sheridan, Wyo., and Eros in Baton Rouge, La. She also sells Zappos, Garnet Hill and Anthroplogie.

The way she has run her business over the years is to be the first one on the floor, the first to get reorders, and the first to get paid. Her 1/30s were in stock the first week in January. Before the virus hit, January and February were fully in store and a good percentage of her March merchandise had been shipped out to stores. On March 15, they decided to halt and not to ship to stores. She noted that stores in the Southeast and Southwest are still taking orders. Stores in the Southeast have even placed reorders. April/May merchandise is mostly in, except for some things from India and Peru.

What Nakios has found to be successful are virtual trunk shows with stores. “We’ve gone grassroots, it’s so important to support specialty stores. So many of them are doing incredible things online,” she said, using Instagram and Facebook in creative ways.

For example, on Tuesday she is doing an Instagram Live at 11 a.m. with a store called Savvy in Greenville, S.C., and later will take over the Instagram Stories of Rhodes, a specialty store in Charleston. That night, she will also do an Instagram Live at 8 p.m. with Mine by Sandy, a North Carolina account, which has done this with brands such as Frank and Eileen and Citizens of Humanity.

Nakios said she’s had numerous conversations with Meg Strader, owner of Simply Meg’s. “So many ideas have come from these conversations. Stores say they’ll make it happen and they’re going outside their comfort zone, others say they can’t do it,” she said.  In fact, when she asked Strader if people are buying because they need something or to support her, Strader said they say, “We’re buying to support you.” Some of Simply Meg’s customers are purchasing gift cards to spend at the store later. Strader has been in her store shipping packages daily and dropping off goods at people’s homes. Strader recently shipped 30 packages in one day alone.

Nakios said she recently spoke to another store, Cool Sweats, in Wilmington, N.C., which got approval to reopen its clothing store.

Nakios has been doing revenue share programs with specialty stores through June 1, which gives stores a direct link to Lilla P’s site and the store gets credit, and they pay a commission to the rep. She said this is for specialty stores that don’t have an e-commerce site or aren’t set up to sell on Instagram.

Inventory obviously remains a challenge. She said so many brands are focused on their April/May deliveries. “There is so much spring product. They [stores] won’t take it and inventory is a concern. There are fewer off-price channels, and stores like T.J. Maxx are working so differently and have weekly open to buys,” she said.

She said Lilla P applied for a small business loan and was approved, but unfortunately the money is not available.

She also said she’s working with her suppliers because there are minimums, and frequently they’ve had to make more product to hit their minimums. They’re trying to adjust that. She said people are always looking to last year and the year before “and all that’s off the table.” She said she’s had to reanalyze sales for fall.

For fall, she narrowed down the line and it’s not as big as it was. “It’s smaller and tighter and more focused,” said Nakios. She said she’s been selling the fall line since February, and already has healthy orders in her books. She has set up a real-time B2B inventory link, and stores can have access to it and see the styles, colors and sizes in stock, as well as lifestyle and product images they can use. She hopes to have it shoppable this year. 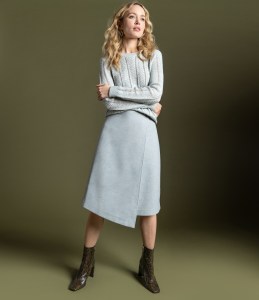 She did note that her line is timeless, which puts her brand in a good position. “I do feel fortunate in the category I’m in. It’s not an indulgent purchase. It’s comfy,” she said, and her customers tend to make fewer, better purchases.

Interestingly, Nakios does see at the end of this a return to regional trade shows and road teams. “People don’t want to go into cities,” she said.

She’d also like to see a potential reset of the fashion calendar. Nakios noted that fall will be delayed because factories are just catching up. She said it will help specialty stores if they can sell cashmere sweaters actually in the fall. This will allow people to sell at full retail.

Most stores say they’d like spring merchandise in February, but now it comes in January. It would be great if Christmas merchandise could come closer to Christmas, and then have sales through January and then new product trickling in, Nakios said. Fall should come in August. “People are so ‘buy now, wear now,'” she said.

Further, Nakios believes that specialty stores shouldn’t put their whole web site on sale. They should do dresses this week, and pants another week. “As much as everyone wants to turn it into cash,” she said, people should pace the sales. “Depending on what happens with department stores, if specialty stores can stand their ground, we can have healthy turnaround,” she said. 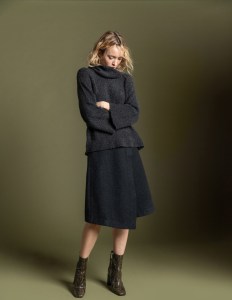 Nakios said she’s also working with her customers on unique payment terms and extended payment terms. “Cash flow is so important,” she said. They just started using ACH (Automated Clearing House), instead of paying by checks. “It’s enabled us to set up various payments terms with the customer,” she said. Nakios said order by order, it establishes ACH terms where they can do split payments over a period of time.

She said some specialty stores weren’t willing to adapt to news ways, and didn’t set themselves up for e-commerce. “Some stores are scrambling to get a Web site up. It’s better to go out with Instagram or texts. How does a specialty store compete with Shopbop?” Nakios said.

Finally, she noted the morning before she left New York for Charleston, she met a colleague at the New York office for a 7 a.m. video shoot. They took videos of Nakios showing fall and holiday and spring 1 delivery. Nakios plans to put that on YouTube. “The customer can see me doing a virtual showroom appointment for the fall line. We’re working on the next seasons as well,” she said.