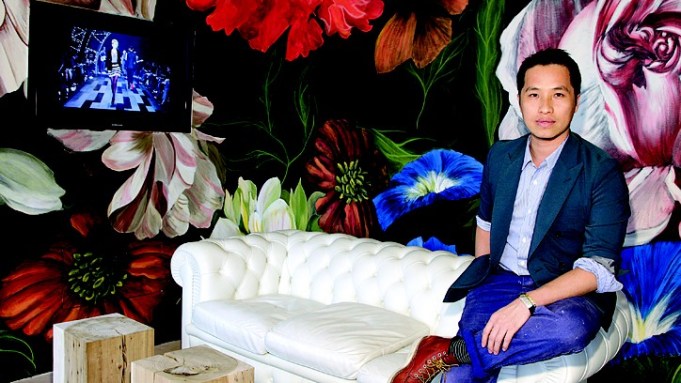 Soon after launching men’s wear in 2007, designer Phillip Lim began sticking men’s looks into runway shows dominated by women’s wear. But that era ends Friday, when the men’s line will have its first stand-alone presentation.

“The women’s would snowball and kill everything in its way,” Lim said. “So the men’s story wouldn’t get told. It was too chopped up. But the men’s collection is finally where I want it to be, so it’s time to show it. It’s time to stop ignoring half the world’s population.”

Men’s is just 8 percent of Lim’s $40 million business, he said, but the designer is 100 percent committed to it because — for one thing — he’s hooked on the gratification of being able to wear his own work.

The first men’s collection he ever showed was marked by boyish proportions, bright crayon colors and a smiley-face shirt. But the design has shifted from childishness to chic and worldly — surprisingly so for the contemporary market.

For spring 2010 Lim was inspired by the post-war Beatniks and their essentially modern acceptance of both high and low, classical and exotic, new and old. They shed the armor of traditional masculinity, and that’s why you won’t find a power suit in the collection.

“There needs to be a sense of vulnerability and transparency. I want to see and feel that a person is actually human, not just fear the shoulder pads or the briefcase,” he said.

That message has resonated better in Europe and Asia. Lim’s men’s wear is sold in stores in 45 countries, such as Barneys New York, Isetan and United Arrows. But U.S. editors and buyers are timid in their approach to fashion, he said.

“I’ll be straight up with you: To do men’s is such a battle. You’d think it would be easier, when you think of guys and how easygoing the men’s press is. But the resistance is so much more. That’s the irony of it all. No one has the guts to be colorful. Or the will,” he said.

After he met the resistance initially, Lim retooled his strategy.

“What can I do to meet them halfway, or even a quarter of the way, so I can do what I want to do, but also make a business? Business affords creativity and freedom. We need to experiment more, but in a realistic, relevant context,” he said. Now there is a constant negotiation between the designer’s creative instincts and the appetites of the male consumer.

He has definitely found an audience, albeit a small one. In his retail stores, where men’s gets 25 percent of the selling space, it does an equivalent share of sales, he said. His customers crave newness.

The 27 looks to be presented Friday are unrelated to prep, rock ’n’ roll, military and athletics — they are simply modern.

“Something has to evolve,” he said. “There should be elegance about this, but not uptight, where it’s about looking down on others. It’s just about going forward.”