Lindsay Lohan is set to expand her leggings label, 6126, to a full-fledged contemporary apparel line for fall 2010. She made the announcement on Twitter. 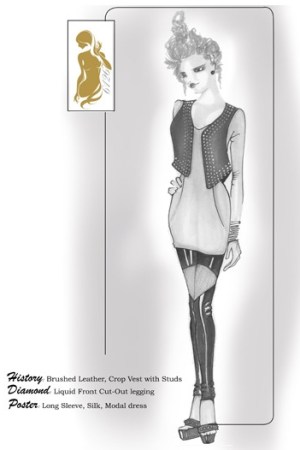 The starlet is set to expand her leggings label, 6126, to a full-fledged contemporary apparel line for fall 2010, with more lifestyle brand extensions planned for 2011. This will be in addition to her role as artistic adviser at Ungaro, a job that has drawn significant attention and controversy to the French brand.

Through her Twitter account, Lohan broke the news on Tuesday, posting: “i need MORE followers i am so sad about this, how can i tell everyone about my 6126 full collection COMING OUT! all clothing.”

Earlier, Kristi Kaylor, principal in 6126 LLC in Beverly Hills, and Henri Levy, chief executive officer of Los Angeles’ DNAM Apparel, which will manufacture the line under license, spoke exclusively to WWD about the expansion.

“We’ve had amazing success with the leggings line,” said Kaylor. “We have a great business with Neiman Marcus and several hundred great specialty stores. [DNAM Apparel] was the perfect partner to work with 6126 and grow it as a lifestyle brand. We’re launching the full clothing collection next year, and a cosmetics line, handbags, shoes, jewelry in spring 2011.”

Levy, whose company has produced clothing for Ed Hardy and Joe’s Jeans, said he was looking for “a feminine brand” for his stable.

“It’ll be a young contemporary price point with contemporary styling,” said Kaylor, citing the still-weak economy. “We’re conscious of it in the sense that we have great price points and quality products. The vision is to offer customers something that they don’t have in the marketplace today, items that go back with leggings: blazers, dresses and tops.”

Fabrics will include the same Modal and lace used in the leggings, plus cashmere and leather.

Kaylor estimated sales of $3 million a year for the leggings, while Levy estimated the clothing collection’s sales will be $10 million wholesale in the first 12 months.

As for advertising, Lohan filmed an episode of Bravo’s “Double Exposure,” set to air in January, in which two photographers covered her shooting 6126’s spring 2010 campaign. Some of those photos will be used to launch the apparel line.

Kaylor stressed Lohan has been a hands-on partner, working with designers in her apartment earlier this month and throwing a working lunch for the design team at E. Baldi restaurant in Beverly Hills.

“She’s not a celebrity who lends her name to a brand,” said Kaylor. “She’s intimately involved from Day One. She picks fabrics. She looks at trims. She picks buttons. She doesn’t let anything go into production without trying it on.”