The fine jewelry collection Annoushka, by Links of London founders Annoushka Ducas and John Ayton, will roll out in the U.K. this month. 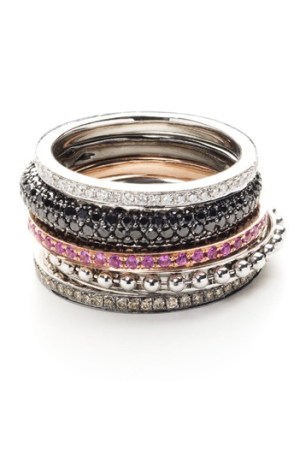 LONDON — Links of London founders Annoushka Ducas and John Ayton are back in business with a collection of fine jewelry that will roll out to stores across the U.K. later this month.

The collection, Annoushka, will be sold through eponymous boutiques at stores such as Harvey Nichols, Harrods, Selfridges, Liberty, House of Fraser and Brown Thomas, with prices ranging from 150 pounds, or $246, for a yellow gold eternity ring, to 20,000 pounds, or $32,800, for a diamond cocktail ring.

Husband-and-wife team Ayton and Ducas cofounded Links in 1990, and sold it to the Greek fashion jewelry company Folli Follie in 2006 in a deal valuing it at $84 million. They will directly operate the in-store concessions, which they acquired when they purchased the British jewelry retailer Pascal last year.

The flagship Annoushka boutique will be at Harvey Nichols on Sloane Street, in the former David Morris space. It will measure 700 square feet, while the nine others will range in size from 500 to 700 square feet.

“We had the opportunity of getting back into the business, and went for it,” Ayton said. “We enjoy working together, and Annoushka has a great passion for jewelry. By the time we open all the stores, we will be the best-distributed jewelry brand in the U.K.”

Ayton said the two would be more focused on developing the craft than on rapid-fire expansion. There are no plans for a wholesale business or for expansion outside the U.K.

Annoushka is being positioned as a bridge collection between silver fashion jewelry and the big Bond Street jewelry brands. Ayton said the closest comparison would be the Italian brand Pomellato. At department stores, Annoushka will be sold alongside brands such as Stephen Webster, Cartier, Theo Fennell and Shaun Leane.

The two plan to sell one-off designs and offer limited runs of handmade jewelry, in addition to more commercial pieces. Everything in the collection is made from 18-karat gold.

All figures have been converted from the pound at current exchange.

The collection has a bohemian, handcrafted feel to it, and could easily be sold in a gallery space, with jewels that range from slim, stackable diamond pavé rings, small charms and clip-on amulets, to bolder pieces created around diamonds or semiprecious gemstones such as aquamarine, tourmaline, smoky quartz and chrysocolla.

Some of the boutiques will offer a “bar” where customers will be able to toy with designing themselves, choosing from a variety of diamond pavé ring frames and gemstones and customize their own jewels.

“I really want to take the reverence out of jewelry — to make it feel less scary and formal,” Ducas said during a walk-through of the collection at the couple’s Chelsea home. “I also want women to see jewelry as a wardrobe: Something that can be built up over the years, or worn layered like clothing.”

Ducas is working once again with the British jewelry designer and university lecturer Elizabeth Oliver, with whom she worked at Links.

Asked about launching a jewelry line during tough economic times, Ayton said it’s something he’d done before. “We founded Links — which was a simple business like this one — during a recession, and took advantage of the opportunities available to us,” he said. “We think the product is very ‘now.’ People are moving away from the flashy brands, and we’re offering them quirky, versatile jewelry with a value proposition.”