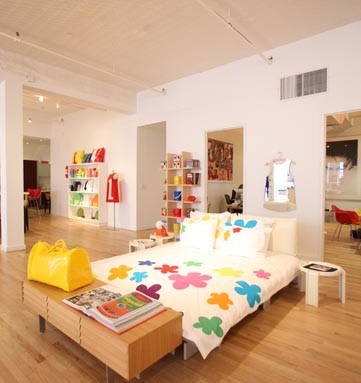 Bright Pop Art flowers decorate pillows and burst out of vases, a rainbow of painted circles spreads out across one wall and a pair of beautiful eyes gaze from artist Rudolph Stingel’s carpet in Perry’s new 3,000-square-foot store at 383 West Broadway in SoHo.

If the second-floor loft space looks like it was decorated by someone with a fetish for Sixties design, it was. The decade that inspired Perry’s lifestyle products and fashion looms large, from the moment customers step off the elevator and see a huge photo of John Lennon and Paul McCartney that hangs over a sofa covered in a black-and-white psychedelic print fabric.

Perry’s first retail venture is divided into different areas like the rooms of a house. The store features the designer’s ever-expanding product line, everything from Mod A-line dresses to flower-covered sheets to Mod umbrellas. The store is expected to do $4 million in the first year.

“My whole inspiration comes from the great design of the Sixties,” Perry said. “The design from that period is what really excites me.”

Perry is a die-hard fan of the decade. For 10 years, she wore nothing but vintage, especially favorites such as Rudi Gernreich, Pierre Cardin and Courrèges. “I loved the look. But I don’t want people to think it’s retro. This is modern,” she said, referring to her silhouettes — simple sleeveless and long-sleeved A-line dresses in double-knit wool jersey. A black sleeveless dress decorated with a rainbow retails for $1,195; a dress with arrows pointing up and down, $1,050, and a black belted style with small white flowers strewn at the hem, $1,395. “I did a dress called Fleurty and the flowers just popped off and went on the pillows,” she said, explaining how she started a new product category.

When Perry launched her company in January 2007, she had never designed before. But her family was in the textile business and owned Dana Mills. “There were swatches everywhere,” she said. “My mom had great style. My dad was a painter. I grew up in this very modern house, so I always appreciated great design.”

Jeffrey Kalinsky, owner of Jeffrey New York, was the first person to buy the collection, which is also sold at Bergdorf Goodman, Bloomingdale’s and Nordstrom. Perry is ready to make a big push for her wholesale business. A showroom is located in a separate space behind the store.

A full kitchen with a long counter and stools will be put to use as “a little espresso bar,” Perry said, adding, “I’ll probably make cupcakes. I’m a big fan of cupcakes.” It figures the “Queen of Happy,” as Perry calls herself, would be a cupcake fanatic.

“I translated how I live at home to the shop,” said Perry, whose home is decorated in rigorous Sixties style. There’s a modern sofa and two period arm chairs in the living room. A red lip-shaped telephone is a table accent Perry brought over from her residence. To complete the experience, a collection of Perry’s favorite DVDs such as “Breathless,” “Charade,” “Valley of the Dolls,” “Modesty Blaise” and “Funny Face” will be played on the plasma TV.

Perry shops eBay and antique markets for finds that complement her own products, like the vinyl ice buckets in primary colors of red, yellow, green and blue, and Heller dinnerware, that Melamine staple of Sixties outdoor entertaining. The plates in hard-to-find colors such as turquoise and yellow are displayed on a vintage Marimekko table.

Perry also carries a selection of period jewelry, including chunky black-and-white plastic earrings, Lucite bracelets, rare bracelets made of multicolored plastic squares, $300, and plastic watches by Nixon, $60. Throughout the store are whimsical items such as door stoppers shaped like paint tubes, a book of paper dolls of the Sixties and note pads that play off her dress designs.