Actress discusses inspirations and her new capsule collection with Belstaff. 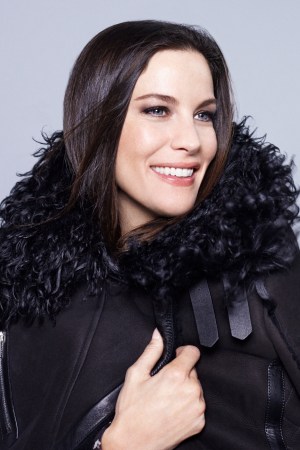 LONDON — All too familiar with the lumbering pace of the film industry, Liv Tyler admits she’s loving the immediacy of fashion.

The actress has just wrapped her latest film “Wildling,” and has been spending time at Belstaff in London designing a fall 2016 capsule collection that will debut in New York in February.

“You can really create something right in front of you — and you can produce it. I can’t believe how fast it happened. I was like, ‘Wait, I want to take forever and research and take months to create it,’” said Tyler, who is working alongside Delphine Ninous, Belstaff’s vice president of women’s design.

“With a film you have to write the script and it can take months to get your movie made, and then you do your performance, and it can take a year to come out,” she added.

Tyler’s collection of eight to 10 pieces includes outerwear, footwear and bags, which will make its debut during New York Fashion Week in February. The collection will also have its own swing tag with Tyler’s signature and will be priced and sold alongside the main Belstaff fall line.

Tyler wanted the collection to work for her as she dashes around London and Manhattan with her two kids.

“Especially at my age now, and as a mother, I like this idea of things being very functional and really worth spending money on — and chic and beautiful, too,” she said, pointing to the collections’ mood boards in the brand’s Bond Street studio, above the flagship.

“Delphine had come with all these pictures of me just walking my son to school, dressed in things I had grabbed off the floor. I hadn’t planned my outfits at all. She put all these mood boards together and we talked about wanting to do the best leather, and an amazing army coat, and a beautiful winter puffer coat — but with some sort of fluffy element to it.”

While the pace of fashion is faster, she said the creative process is similar to acting because “you can tweak things and change things. I’m used to doing that with my performances, when you take a script and it becomes more and more you, and you change the way you do things, so it’s been so fun.”

In her role as brand ambassador, the 38-year-old Tyler is also featuring in a multiplatform campaign in 2016. Her collaboration with Belstaff began earlier this year as executive producer of Belstaff’s short film, “Outlaws,” with David Beckham, Harvey Keitel, Cathy Moriarty and Katherine Waterston.

Tyler’s fiancé is David Gardner, a sports and entertainment manager who is close friends with Beckham. She is a mother of two boys: Her son, Milo Langdon, is from a previous relationship, while Sailor Gene Gardner was born earlier this year.

With all the male energy flying around, it’s no wonder Tyler wanted the collection to have a masculine-feminine feel.

“I’ve been thinking about that kind of thing, that you can be incredibly feminine and all woman, but still have something really strong and masculine in your outfit. It makes you feel powerful. I want things to fit a man and a woman.

“Some of my favorite pieces are things that I borrow from David’s closet or my dad [Steven Tyler’s] closet. I’m quite a tall person with broad shoulders, so I can fit into men’s clothes. I always love a man’s coat, it’s one of my favorite looks,” she said.

Fit, she added, is a big priority. “We’ve been spending a lot of time really trying everything on, and wanting everything to really function and allow for freedom of movement, which is so important. And you have to be warm, especially in New York City.”

She said she’s particularly keen on tall, lace-up boots in stretch leather: “We were trying to do something really thin, to just below the knee. They lace up because I have quite thin lower legs and I always struggle to find a boot that has a fit for all leg sizes. I was just thinking that it would be really nice to have something that works for everyone, because sometimes boots can be too thick and chunky,” Tyler said.

The Belstaff project has coincided with a momentary break from acting. “I need a little break, yes. I don’t ever take one. I like to be busy and working all the time, but I need some time with my children. It’s been really hard being on set for 12 hours, because you leave and it’s dark and you come home and they’re asleep.”

It’s a break of sorts: During her latest trip to London, she was also modeling a few pieces from the Belstaff fall pre-collection, which is inspired by military men — and women — on a mountain adventure. The collection features long toppers, some with leather details on the sleeve and side-slash breast pockets for quick access to maps, while others are double-breasted and long, done in wool-cashmere. There are peacoats with coyote fur collars and shearlings galore.

Fabrics have been built for inclement weather with outerwear done in water-resistant wool; wool bonded with rubber and down jackets done in nylon and shearling.