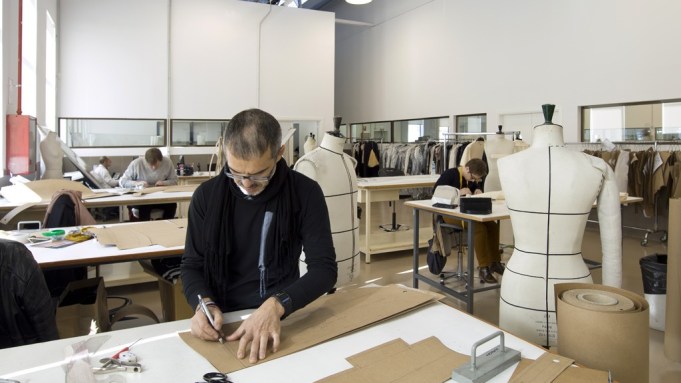 Madrid — Despite the Spanish meltdown, Loewe is betting on its roots.

The Madrid-based luxury leather-goods company inaugurated facilities last week in the industrial suburb of Getafe, a half-hour drive from the center of town, that will double its production capacity and create jobs in severely underemployed Spain.

Adjoining the original plant, total floor space for both two-story buildings stretches to approximately 162,000 square feet. The addition houses a computer-controlled cutting center; storage area for raw materials and (predominantly Spanish) skins; design departments for handbags — 65 percent of worldwide Loewe sales — and ready-to-wear, both designed by creative director Stuart Vevers. The space also houses the corporate gem: an archive-museum with vintage Loewe items dating from 1905 to the present. The Getafe workforce is expected to reach 430 — an increase of 180 — by 2015.

“This is a brand that has survived everything — even the Civil War,” said a spokesman during a walk-through of the facility. “We have a very energetic, international team. We’re optimistic and the new facility reflects our confidence in the future.”

“The expansion will allow us to comfortably meet the growing demand for our products,” all of which are made in Spain, said Lisa Montague, chief executive officer of the LVMH Moët Hennessy Louis Vuitton-owned brand over an early afternoon coffee in the company’s headquarters here. “We have a very niche business focused on a balanced customer base and a great loyalty to the brand. The company is profitable; we’re progressing well.”

With an estimated volume upward of 200 million euros, or $260 million at current exchange, last year, according to analysts, she predicted a “double-digit” sales increase for 2012 “fueled by Japanese and Chinese tourists.”

In the domestic market, visitors — particularly Asians — provide all the growth. “We’ll finish on a record-breaking year. The brand is bigger than the business,” she said.

As for Christmas expectations in Spain, Montague shuddered, “It’s nerve-wracking and tough out there; our customers are suffering. We didn’t expect a bumper gift-giving season but we won’t know how we’ll finish until the first of January.”

Montague is high on homegrown artisanal tradition and Spanish production in general.

Preserving the Spanish craftsmanship that is the brand’s hallmark and working to ensure its continued development are central to Loewe’s commitment.

“It’s a great testament to Spain’s number-one best-loved brand that it’s been kept pure in terms of integrity. There is an emotional connection [to the brand] and in my view, it is underpotentialized,” Montague said.

Hopefully, not for long. “In 1996, LVMH wanted to unlock the brand’s potential. My role is to set the brand in the right direction — meaning a global footprint,” she said. Currently, 75 percent of production targets principal export markets such as Japan, China and Asia-Pacific, France and Great Britain.

Corporate strategy continues to focus on remodeling stores and the rollout of new design formats, which Montague called “a big (financial) commitment that enjoys the deep support of LVMH.” Forty-two locations have been updated, or a third of the retail network, and another 20 overhauls are planned by the end of 2013.

Upcoming openings include the Avenue Montaigne flagship in Paris set to reopen in March and, by the end of this year, a second Singapore store in Marina Bay Sands resort area.

Loewe will plant its flag in Italy for the first time with a Rome location, “a perfect little site, small but beautiful in the Piazza di Spagna” bowing in April. The company is also scouting retail space on Milan’s Via Montenapoleone, Montague confirmed. “The brand has a strong wholesale business in the Italian market; we know the customer likes the product and we’re confident there.” A flagship is planned for Shanghai in the spring, as well, and a Hong Kong store will relocate next fall, she added.

As for opening a New York store, “I’m sure when the time is right we will. Currently, we have a very good relationship with our wholesale accounts, particularly Bergdorf Goodman,” which has pumped up the brand’s awareness and image in the U.S., she said.