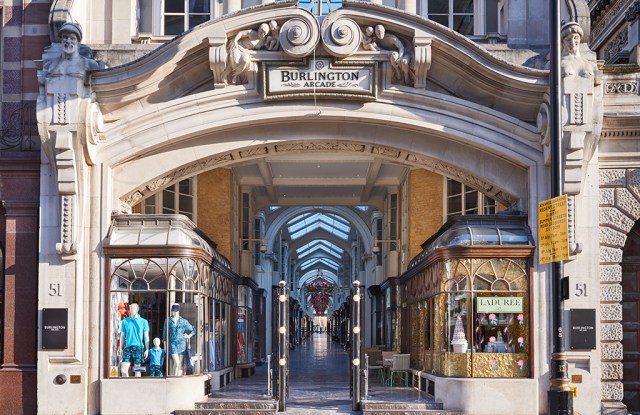 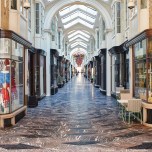 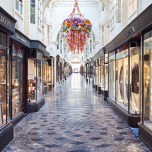 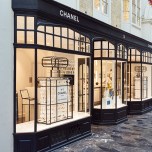 LONDON — The Burlington Arcade is back in business with the traditional troop of Beadles ringing opening bells each morning at 8:00 a.m. as they unlock the gates, and a lineup of luxury stores aimed at the city’s flush international tourists.

Over the past 18 months, the covered arcade that runs between Piccadilly and Burlington Gardens, alongside Bond Street, has undergone a 10 million-pound, or $15.6 million, overhaul at the hands of its owners, property investors Meyer Bergman and Thor Equities.

The 19th-century shopping parade next to the Royal Academy — both once formed the Cavendish family’s former London home — has undergone a redesign by the British architect Jamie Fobert, who specializes in historic restoration projects. His past retail clients include Selfridges, Givenchy, Versace and Urban Retreat at Harrods.

The space now has snazzy English stone floors, restored Regency-era details, and a lineup of shops including Ladurée, Chanel-owned Eres, Barrie and Maison Michel, as well as luxe Singaporean accessories brand Kwanpen, Harrys of London, Georg Jensen and Theo Fennell. Gone are some of the jewelers and cashmere shops for which the arcade was once known.

Frédéric Malle Scents and Fragrances is set to arrive soon, while some of the arcade’s longstanding tenants such as David Duggan watches, which has a workshop and restoration service upstairs, and Hancocks, the fine jeweler that makes the Victoria Cross, the British military decoration awarded for conspicuous bravery, remain.

Ellen Lewis, retail marketing director at Meyer Bergman, said the aim of the redesign was to create a sense of luxury and of place, “where people actually wanted to stay a bit longer. There was no point in our doing a carbon copy of Bond Street, and we really pay homage to the British element, with a mix of independent stores and global brands,” she said.

She added that conversations with global brands have so far been focused on emerging elements within their portfolios, such as Barrie and Maison Michel.

Indeed, the Burlington Arcade shops are the first international boutiques for those Chanel Métiers d’Art brands. Chanel has taken total of five spaces in the arcade, including a fragrance boutique and one for the watchmakers Bell & Ross.

Although she declined to discuss rental prices, a real estate source said they range from about 1,000 pounds to 1,200 pounds, or $1,560 to $1,870, per square foot, compared with nearby Bond Street, which now commands 1,400 pounds, or $2,180 per square foot. All figures have been converted at current exchange rates.

Unlike Bond Street, however, the Burlington leases are new and no key money is required. Tenants are also being offered three months free rent while they refurbish their stores, which each span about 130 square feet.

Natalie Lintott, partner at Cushman & Wakefield, the leasing agents on the project, said the arrival of brands such as Chanel and La Perla has been key, and trading among the new arrivals has been “phenomenal.” As a result there are now 3-4 under bidders for every free unit that comes to market, she said.

As part of the relaunch the new owners have also brought back the Beadles — once known as the world’s smallest law enforcement body. Originally members of Lord George Cavendish’s regiment — the 10th Hussars — they ring the morning bells three times to herald the arcade’s opening.

They now have uniforms — frock coats, waistcoats and top hats — all made on Savile Row. In addition to patrolling the arcade, they also conduct tours of its shops and workshops.

Lewis added that, given the arcade’s intimate connection with the Royal Academy, art would also play a central role in the new space. For the opening earlier this month, the owners commissioned the paper artist Zoe Bradley to create big, hand-sculpted floral installations that will be remain place until end of September.

“We’ve always had a good relationship with the Royal Academy, but we’d like to get that natural connection back again,” she said. “We’re hoping in the future that we’ll continuously be able to display art works.”