Victoria and Albert Museum Puts Italy in the Spotlight

The London museum fetes Italian glamour from the forties to today, and from Elizabeth Taylor to Sophia Loren. 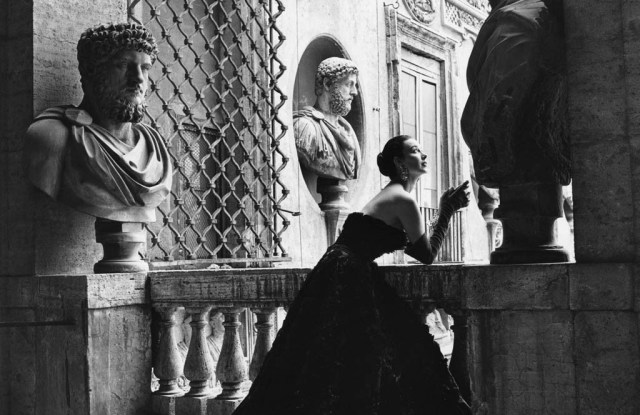 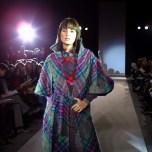 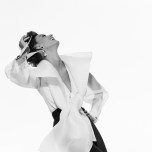 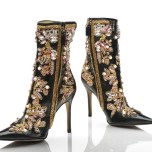 LONDON — The Italians have long been lovers of “lo stile Inglese,” or English sartorial style, with its tweeds, herringbone fabrics and pops of silk and print. The English are returning the compliment this week with “The Glamour of Italian Fashion 1945-2014,” a show dedicated to postwar Italian style at the Victoria and Albert Museum.

The tightly edited show — there are only 100 pieces of men’s and women’s fashion on display — is an earnest and enthusiastic tale of the rapid journey Italy made from postwar ruin to modern-day prosperità. The show begins with a large, black-and-white image of Florence in 1946, all rubble and crumbling buildings, and ends with a peacock’s display of opulence including the liquid white gown and showy gold dragon brooch from Tom Ford’s fall 2004 Gucci collection, and Roberto Capucci’s rippling fuchsia and green silk evening dress.

In between there’s jewelry, fur, cashmere, glitter and Pucci prints galore. On display are some of the Bulgari gems that Richard Burton used to woo Elizabeth Taylor while the two were filming “Cleopatra” in Rome the early Sixties. There’s also a display dedicated to the seminal Sala Bianca fashion shows at Palazzo Pitti in Florence; a nod to men’s tailoring, and myriad examples of Italy’s technical prowess — from industrially produced knitwear to handcrafted Fendi furs.

“Italy was at the forefront of convincing the elite consumer to buy ready-to-wear fashion, mostly because the Italian factories were so skilled at making it,” said Sonnet Stanfill, curator of 20th century and contemporary fashion at the V&A. Indeed, the show, which runs from Saturday to July 27 and is sponsored by Bulgari, highlights the starring role that textiles and manufacturing played in the industry’s swift expansion.

“Knitwear grew out of undergarment manufacturing, so it was never bulky, and there are so many examples of Italian designers pushing for the right effect in the cut and construction of the textiles,” said Stanfill.

In one room, a digital wall map of Italy shows the regions that have become world famous for their materials: Como for silk; Biella for wool, and Tuscany for leather, to name a few.

Franca Sozzani, the editor in chief of Italian Vogue who cohosted the dinner at the V&A on Tuesday night to mark the opening, said Italy was reborn after the war thanks to entrepreneurial clans such as the Maramotti family, the founders of Max Mara, and the Della Valles, who started Tod’s. “It was a way to survive in a certain kind of area where there was nothing,” said Sozzani. “Soon, those districts became specialized…while Roma was all about the small boutiques, tailoring and dressmaking.”

“Boy, she had an appetite for jewelry — I can tell you that,” said Bulgari of Elizabeth Taylor, whom he said would drive her car straight into the private courtyard of the Bulgari store in Rome to avoid the paparazzi. “The magic would begin when she was alone in a [private] wood-paneled room with Richard Burton, and she started choosing the jewelry.”

McGovern also recalled her salad days in Rome. “My first adult trip to Rome was when I went there to film ‘Once Upon a Time in America.’ I loved it — it burst open my world,” said McGovern, whose latest CD, “Still Waiting,” with her band Sadie and the Hotheads has just been released.

Eva Cavalli said she’s proud to be Italian, even though she is Austrian. “The Italians are happy, they’re positive, they have the sun and they don’t take themselves too seriously. Things are not good in Italy right now, but the Italians are still happy,” she said.

Stanfill said she approached the show from a very V&A angle. “We like to talk about process, and give a sense of the hand and the maker,” she said, adding that people who are looking for an encyclopedic review of Italy’s fashion houses will have gone to the wrong place. “What we focused on are points of influence.”

The glamour of the show’s title shines through chiefly at the end, with a lineup of some of the greatest hits from the past four decades, a time when Italian designers became more famous than the people they dressed, said Stanfill.

The displays range from Miuccia Prada’s shooting flame heels from spring 2012 and Tod’s driving shoes, to a dress from the Valentino Couture Wunderkammer collection and a floor-length number from Fausto Puglisi to Giorgio Armani’s slouchy suits.

About 40 percent of the items have been loaned from more than 30 archives, institutions and collectors, including the Pucci Foundation, Palazzo Pitti, the University of Parma and the archive of Giovanni Battista Giorgini.

A buying agent, Giorgini was the granddaddy of Italy’s runway shows: In the early Fifties, he was instrumental in getting Italian designs in front of buyers from stores including Bergdorf Goodman, I. Magnin and B. Altman and in international publications.

Giorgini started showcasing the Italian collections from his home in Florence, and later moved them to the Sala Bianca at Palazzo Pitti in Florence. The gowns were one-third of the price of those in Paris and the buyers were impressed by the Italians’ sense of color and richness of textiles, said Stanfill, who has re-created the early days of the Sala Bianca at the start of the show.

It’s clearly had an impact. British Vogue editor Alexandra Shulman, another cohost of the launch event, said she was struck by the early “wonderful evening dresses that you’d still want to wear today…those kind of gala gowns really haven’t changed that much.”