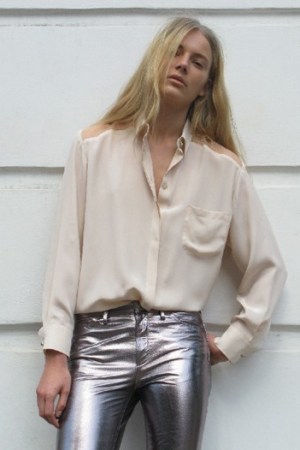 Central Saint Martin’s alumna Joanna Sykes describes her design philosophy as “an attitude to dressing and style.” Sykes, who is showing her collection for the first time on the London schedule, said the spring collection of simple silhouettes will include sleek, tailored trousers and jackets in Italian viscose, biker jackets and skinny trousers in leather, and T-shirts and tank tops in silk, some with organza insets worked into the fabric. “It’s a play between solid and sheer, a quirky sexiness,” said Sykes, who launched her line two years ago and currently sells at Matches and Joseph in London and at Elizabeth Charles in New York. “Through the cuff of a jacket you might catch a glimpse of a wrist.”

Sykes, who worked at Giorgio Armani and Alberta Ferretti before starting her own label, also has a secondary line, Sykes Silks. The collection of camisoles, Ts, jumpsuits and boxer shorts, all of which retail at under $500, will be worked into her presentation. To underscore the line’s real-world appeal, Sykes has tapped models with a wealth of life experience to walk in the presentation: the oldest among them is an 82-year-old former dancer. — Nina Jones

Tanya Ling, who’s known for her whimsical fashion illustrations, is returning to her design roots. The London-based designer and illustrator will present her first collection as the creative director of Veryta, a new label and not-for-profit foundation founded and backed by YSL’s Stefano Pilati and Filippo Binaghi of Lorma Srl, an Italian silk manufacturer.

The Veryta Foundation will donate 10 percent of the sales of its collection of silk shiftdresses and shell tops and trousers to a charity that runs schools for poor children in India. Ling, who trained in fashion design at London’s Central Saint Martin’s, described the collection as “a salute to Nancy Cunard and Pina Bausch,” noting that the stylish Cunard was also known for her antifascist and antiracist activism.

The collection of 15 looks, which Ling will unveil at Claridge’s on Friday, also nods to the silhouettes of the designer’s native India. A cream silk top has a collar in the shape of lotus flower petals and a pale blue silk dress has a sarilike sash draped across the body. There are silk jumpsuits, cotton and silk shorts and a duchesse satin princess coat.

Ling said she isn’t unduly concerned about launching a line in a shaky economy. “A startup is always difficult, but in a downturn you can pace yourself,” said Ling. “And people always love to discover new things.”— N.J.

Marcus Constable is back in action on London’s calendar, after nine years under the radar working for houses like Plein Sud and Claude Montana.

Constable, who said it was “time to do my own thing again,” said his latest collection references Aubrey Beardsley’s Art Nouveau illustrations, the Japanese artist Yayoi Kusama’s line drawings, and men’s tailoring from the 1800s.

“From Beardsley’s illustrations, I’ve produced garments with block patterns and different textures,” said Constable. “There is a monochrome palette through the collection combined with tonal colors of stone.”

The British designer will show his collection at Liberty. He will be the only designer to show at the store during London Fashion Week. It is a fitting return: The store bought his graduate collection in 1995, when he was studying for his master’s degree at Central Saint Martin’s.
— Louise Bartlett

For Atalanta Weller, shoe design is a game of compare and contrast.

For her debut footwear collection, her inspirations were Pompeii and “Star Trek.” Heels range from pancake flatties to towering wedges, and she’s combined materials such as calf and stretch satin — and tossed in rubberized nubuck and iridescent python for good measure.

“For me, the key is getting the balance right — but I think you can push the idea of balance a long way to define beauty,” declared the 30-year-old Brit.

Although Weller is set to make her official debut during London Fashion Week, her collection, which is produced in Portugal, is already carried at Browns Focus. Her dramatic, sculptural designs have appeared in past runway shows by Henry Holland, Sinha-Stanic, and Gareth Pugh.

Weller studied sculpture before getting her degree at the famous footwear institution Cordwainers, now part of the London College of Fashion. She went on to refine her craft at companies including Bruno Magli, Hugo Boss and John Richmond, and through her recent design collaborations.

Weller, who counts Pierre Hardy and vintage Salvatore Ferragamo designs among her inspirations, and who admits to donning dizzying high heels at breakfast, “because it’s a really nice way to start the day,” said, “I’ve always wanted to have my own collection; I’ve put all of my savings into it. I love collaborating, and I hope to do more — but my focus is on this now.”
— Samantha Conti

The British designer has created 40 silhouettes, ranging from flouncy dresses and intarsia jumpers to thick Lycra spandex leggings to T-shirts in silk and cotton blends.

“Ballantyne has allowed me to bring my hand to what I love — intarsia knits and patterns,” said Goldin, who admits, however, that she’s tweaked her approach for the new line. “With my signature collection, I’m used to innovation and being explorative, really working into the garment. With Ballantyne, I knew I had to make it more commercially viable.”

The collection is filled with “feminine twist shapes across the bust and body,” said Goldin, adding she took butterfly wings and Aztec artwork as her inspirations. “It’s bright, modern and graphic — not floaty.”

Giuseppe Rossi, Ballantyne’s chief executive, said he chose Goldin because the company wanted to take Ballantyne back to its British roots — and link it with fresh talent.

“We took Louise to the factory and archive in Scotland, and asked her to reinterpret Ballantyne using her taste and vision,” he said. The collection will be sold at Ballantyne stores and specialty stores worldwide, said Rossi, adding that the collaboration with Goldin would continue for fall 2010. — S.C.