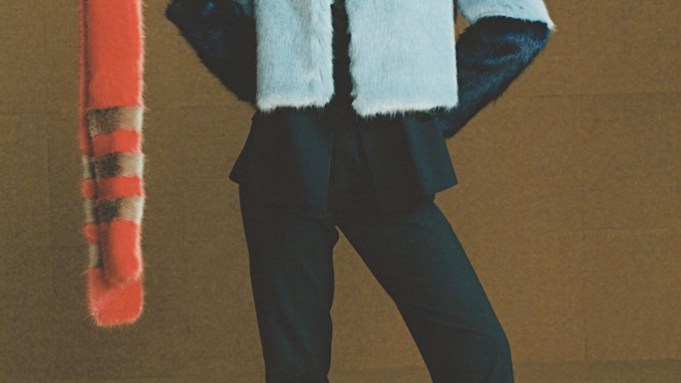 The calendar is dotted with new names and labels staging runway shows, presenting at Somerset House or holding private appointments for buyers and press in the British capital. Here, a selection of fashion-week freshmen.

Hannah Weiland, 24, was working as an intern last summer when she designed a faux fur Breton stripe coat that immediately sparked interest among retailers.

“I only planned to make around 20 to sell to friends,” said the designer. “Then Avenue 32 took us on, Laura Bailey wore the Wilma coat to London Fashion Week, and Natalie Massenet saw it on her and e-mailed me. So it all happened pretty quickly.”

The result: Weiland left the London College of Fashion course she was taking in order to pursue her line. Shrimps is stocked in Net-a-porter.com, Colette, Selfridges and Matches.

“‘Shrimps’ is my childhood nickname,” said Weiland. “I liked the contrast between a hard crustacean and soft faux fur.”

She added that she enjoys infusing her faux furs with whimsical colors and patterns. For spring, she said she plans to incorporate a greater variety of textiles into the collection.

“You can expect more exciting materials — not just faux fur — and many more accessories,” she said.

“The demand for us to move toward women’s wear has been growing with every season. Women are constantly buying pieces,” said Turvey, “so we decided to follow our spring men’s wear with a women’s wear look book for editorial. It’s about showing my collections as being accessible to both men and women.”

Among Turvey’s trademarks are his hand-drawn prints applied to sportswear silhouettes.

“I love to draw and find it the best way to translate my vision into my designs,” said Turvey. “Sportswear shapes and their functionality make them so accessible, and they can be manipulated in numerous ways through fabrics, cut and finishings. The Joseph Turvey woman is the kid you hated at school. The girl who ruled the girls just as much as she ruled the boys.…It’s the girl who isn’t afraid.”

Turvey, who graduated from the London College of Fashion in 2012, has been sponsored and mentored by the house of Hardy Amies. For three seasons, he showcased his looks at Fashion East during London Collections: Men, and is stocked in retailers including Joyce and IT. Turvey also has collaborated with brands like River Island, NewEra, Hush Puppies, Lavenham and Eastpak.

As his women’s collection takes its cue from his men’s wear line, he said, “Sportswear silhouettes are complemented with luxe fabrics from silk to Sophie Hallette lace. This season, my prints take inspiration from Yakuza body art and water reflection.”

Identical twin sisters Mandeep and Hardeep Kaur Chohan were inspired by their Indian roots and love of textiles, which led them to create Nom de Mode.

“Going to India when we were very young, it’s a massive bazaar of fabrics, silks, brocades, embroideries,” said Hardeep. “We remember running around among all the rows of fabrics. And when we went traveling a lot later, we again found ourselves in India, with a much more mature eye. We built our taste already, and we saw all the fabrics and we started to make our own one-off pieces using those fabrics. We thought there was an aesthetic there that we could bring here, and make it more modern, make it more Western, but still make it work in a beautiful way.”

Fabrics are sourced from India, and the designers’ focus is on outerwear; the cape and gilet are signature pieces.

“We’ve gone again with the sort of 1940s, 1950s elegance —long, clean shapes, a few longer silhouettes, and slightly nostalgic,” Hardeep said, noting she and her sister also worked with silks, cottons, brocades, and lots of lace. “We have a beautiful, embroidered sequin on net as well that will be juxtaposed with a nice linen.”

The sisters don’t have a typical fashion background — Mandeep studied law and worked as a lawyer in London, while Hardeep studied literature and currently works in public relations in London. They hold private trunk shows and will be launching a Web site this month.

Paris-born Faustine Steinmetz is making her name in denim that she treats with artisanal techniques.

“I made my first pair of jeans on my tiny handloom without ever even considering that I would continue making jeans in this way,” said Steinmetz. “To me, texture means luxury. Most garments you find in the shops are so flat that it always feels special to me to see some texture. I am very inspired by old artisan techniques, I collect these types of books and try to learn a different technique every season. This season, I have been delving into bobbin lace. This requires quite a lot of patience.”

The London-based, Parisian-born Steinmetz studied in France at the Atelier Chardon Savard and found making patterns and sewing a challenge. She started painting and drawing on fabrics, preferring to express herself with surfaces rather than shapes. She went on to study for her masters at Central Saint Martins under the late Louise Wilson, and interned at various brands including Corinne Cobson, Jeremy Scott and Henrik Vibskov before launching her own label in 2013.

“One of the reasons why I reinterpret basics like denim is because I would like to touch a wide range of women,” said Steinmetz. “I would like women of all ages, shapes and styles to find something they love from our garments.”

The line is stocked by stores including Opening Ceremony, LN-CC and Isetan.

The price range is 400 pounds ($671) for a handwoven cotton sleeveless turtleneck top to 875 pounds ($1,468) for a pair of moldable handwoven silk and copper oversize jeans.

“I never wanted my own label,” said London-based, Dublin-born Danielle Romeril. “I always thought I would make a killer right-hand woman to a great designer, but I wasn’t enjoying working in the houses I was working in, and I couldn’t think of whom I wanted to work with, so I bit the bullet and went out on my own.”

From Bubble Wrap and sticky tape to girl skateboarding gangs, futuristic fabrics and photos from 1860s China, Romeril absorbs myriad inspirations and incorporates them into her funky, carefree line.

Her customer, she says, “spends her holidays jumping off rocks at the best swimming spots, she hangs out with the boys as much as the girls, and at parties, she dances,” said the designer.

She describes her clothes as something “just to throw on with a pair of flats and go. They’re youthful and vibrant, but there is always an unexpected [such as] exciting fabric combinations and interesting surface details. There’s always something extra — an offbeat edge.”

Romeril attended the Limerick School of Art and Design in Ireland in 2007, and interned with designers including Sharon Wauchob and Sinha-Stanic. She made a permanent move to London, where she graduated with a Master’s of Arts from Royal College of Art in 2010, and won the Swarovski & Sophie Hallette Award, The International Flavors & Fragrances Award and the Fiskars Award.

After working with Alberta Ferretti in Italy, she established her own label in September 2012. The line is stocked in shops including Ikram, Joyce, Havana and Avenue 32.

“The starting point for the spring collection was a wild camping trip I took in the mountains in Wicklow, Ireland, last Easter,” she said. “We gathered wood to make fires and cook our dinner and breakfast — it was so peaceful, isolated and beautiful.”

She said this season’s collection is much more structured than the last, with a very defined silhouette, adding, “We are experimenting with loads of appliqués and fabric combinations as well as creating our own camouflages.”