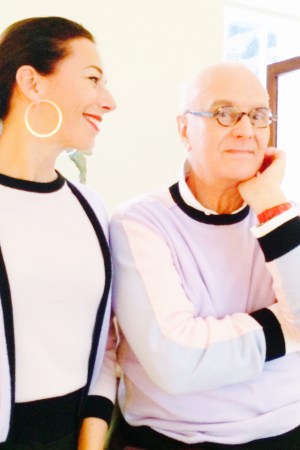 As London Fashion Week shifts into high gear, designers up and down the calendar are building out their brands, firing off capsule collections and marching into new categories as funding flourishes and the British economy continues to grow. Peter Pilotto, Pringle, Christopher Kane and Osman are among the names branching out into new categories as their businesses gain increasing traction in a city more famous for struggling — rather than commercially successful — runway talent.

“The vibe in London is completely different from the one in Paris right now,” said Gavin Haig, Belstaff’s chief executive officer and the former international managing director of Cartier, based in Paris. “London and the U.K. are in great shape compared with Paris and Milan, and the economy here is growing. The funding is here, and it’s a great city both for customers and trade.”

Belstaff is ramping up its own London-based business with enhanced men’s, women’s and accessories lines and a new collaboration with David Beckham. The former footballer appears in “Outlaws,” a short film that will be released Tuesday following the brand’s London Fashion Week show.

Fabrizio Zappaterra, a private equity investor who is on the boards of Temperley London and Hunter, said that in the U.K., “there is more long-term capital available today than five years ago, which is interested in funding category expansion and ‘leveraging the brand.’” He said that at the same time, British “creatives are becoming savvier about where they can take their brand — so that creates a good mix.”

Tech investors also want a slice of the city’s fashion scene: This season Intel became a patron of the British Fashion Council, with the aim of working alongside, and connecting with, designers and retailers to get their smart products into designs, accessories and retail environments.

On Monday, Peter Pilotto will unveil a major move into the footwear category, showing a selection of the brand’s latest offering on the runway. In the past, the brand’s designers, Pilotto and Christopher de Vos, collaborated on runway footwear collections with Nicholas Kirkwood, but they said their customers were asking repeatedly for them to do their own line. In March, Pilotto and de Vos sold a minority stake in their label to Megha Mittal and MH Luxe Ltd., in a bid to grow the business.

The full collection for spring will encompass five styles in two or three color ways. It includes cutout sandals with four-inch heels, flat sandals and two midheight heels. Prices for the shoes, which are made in Italy, range from $595 to $1,350.

De Vos told WWD that he and Pilotto were eager to apply their aesthetic to a whole different category. “We’ve seen through the collaboration [with Kirkwood] that we have a very good sensibility for shoes and our graphics apply very well to them. We try to create flattering layouts and prints and textures for the body, and I think we apply our same aesthetic and graphic sensibility to footwear. It’s a different ball game, but it’s very much product and we are very product focused.”

He said the inspiration this season came from images of a wooden intarsia technique for furniture. “Then we decided to translate this into leather, and we found and developed a very similar technique by mixing different colors of suede and leather. The inlays create a very graphic and rich 3-D effect, which we’re very excited about.”

Going forward, he added, the shoes will continue to be inspired by the ready-to-wear collections.

Christopher Kane, meanwhile, has his sights set on eyewear, and his first collection will make its debut at his show on Monday. The unisex sunglasses collection will consist of two “floating lens” styles, with each variation done in six colors. There are also two Wayfarer-type styles, each done in five colors. The collection is in partnership with Kering Eyewear, a division of Kering, which has a majority stake in Kane’s brand. Kering last year took its eyewear business in-house.

Designer Osman Yousefzada’s new adventure is men’s wear. The designer will be showing off his first capsule collection, four or five looks, on his spring runway. Yousefzada said men’s wear was hard to resist.

“It was quite an organic development: My clean lines and shapes translate quite well, and the collection is inspired by Frida Kahlo. And the men’s collection was about finding a lover for her,” said the designer, adding that he also tapped into the sleek style of Ruben and Isabel Toledo. The capsule includes a tuxedo suit with a cutout collar and high-waisted trousers as well as coordinated separates with ikat and mini-ikat brush stroke prints. Yousefzada said that going forward, men’s would continue to be a part of his offer as he seeks to deepen his relationships with existing wholesale clients.

In addition, Yousefzada – whose tightly run business is self-financed and continues to grow in the double-digits – is launching a capsule collection of five men’s style trousers for women, exclusively at Harvey Nichols. The “Perfect Five” trousers, all from Yousefzada’s archive, were produced in collaboration with The Woolmark Co.

On Saturday, Julien Macdonald showed off his first foray into men’s wear. His roomy, sporty shorts and tops were covered in digital prints. Also on offer were spidery knitted sweaters and loosely knitted T-shirts.

It isn’t only the relative newcomers — or, in the cast of Macdonald, those who have been around since the Cool Britannia movement — who are adding new twists. Even long-established brands are. Pringle of Scotland is expanding into the bespoke business with a new digital project called “Deconstructed.” On Monday the brand will go live with an interactive platform that will allow customers to create their own Pringle cashmere sweaters. Customers will be able to choose from a variety of styles and build their own knits from a palette of 28 colors and a variety of argyle patterns. They can also pick trims and sleeves, select logo placement and have the option to monogram each style. The sweaters are delivered in six weeks and cost 995 pounds, or $1,550.

Those not in the mood to spend will still be able to play and create their dream knits on the microsite, pringledeconstructed.com. The brand is setting up concessions at Selfridges and Lane Crawford where sales staff will be armed with iPads, and ready to take orders. As part of the project, 20 friends of the brand including Tilda Swinton, Manolo Blahnik, Caroline Issa, Bryanboy and David Shrigley have all built their own knits and taken selfies, which will feature in the marketing campaign.