With their line of men's knitwear, Jean-Victor Meyers and his business partner Louis Leboiteux plan to target a new generation of luxury consumers. 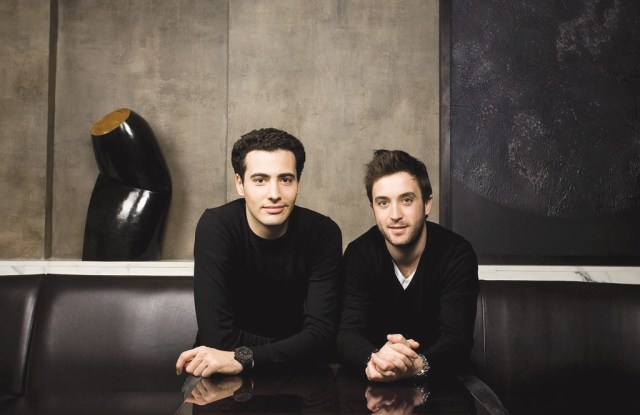 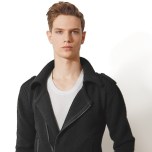 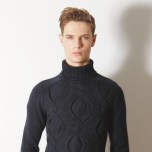 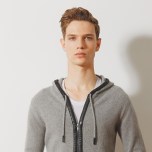 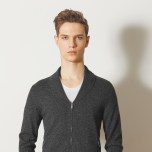 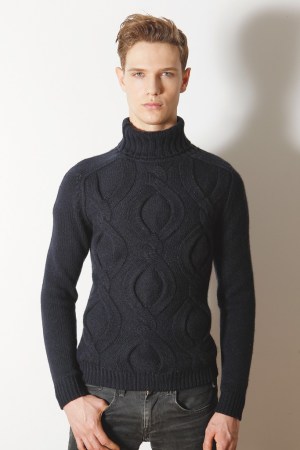 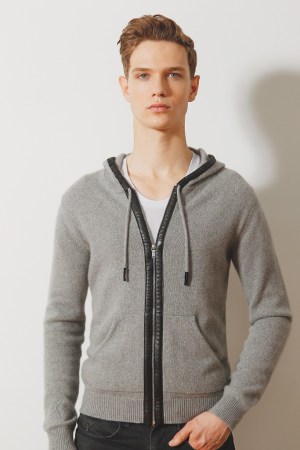 A cashmere and chinchilla-blend hoodie with lambskin trim.

On April 17, Jean-Victor Meyers was ratified by L’Oréal shareholders as the newest board member of the beauty giant at its annual meeting in Paris, succeeding his grandmother, Liliane Bettencourt, who exited the board in February. The ascension made Meyers the youngest director of any company on the French CAC 40 blue-chip index.

This story first appeared in the May 24, 2012 issue of WWD. Subscribe Today.

In some ways, however, tending to those new high-profile duties are a side note to Meyers’ full-time job as president of Exemplaire, the men’s knitwear company he established in February with his close friend Louis Leboiteux. The two 26-year-olds, who met five years ago through common friends, are out to create a label for consumers much like themselves: affluent, young and interested in luxury garments with a contemporary fit.

“It’s informed by our own style, which is quite simple and sober,” said Meyers in his first-ever interview. “We wanted it to be quite minimalist and not showy. You can wear this collection almost anywhere — to work, to a meeting, to the theater or a club. There are details on the sweaters but they are for you and not to show to everyone else.”

The aesthetic matches Meyers’ interview personality, which is well-mannered and unassuming, save for his imposing, but slender, 6-foot, 4-inch frame. “I was always looking for high-quality cashmere knitwear but wanted it fitted and young,” he explained of his decision to go into the sweater business. “Most of the time, high-end cashmere is very classic. And if you buy a very fitted piece that is well cut, you don’t have the same high quality of the more classic brands. I would make alterations on every piece I bought or order made-to-measure. I realized it would be easier to work on my own models.”

Meyers and Leboiteux started preliminary work on Exemplaire last summer. The two friends completed a market study and business plan, with research on competitors in the category, potential suppliers and the white space in the zone. “We found there was a niche in the market. There wasn’t really a brand making high-quality cashmere that was young and fashionable. That was our main idea and selling point,” said Meyers. “There was a time when luxury was very show-off and bling-bling and with logos. I think the new luxury is about being very sober and discreet and not showing off.”

Following their initial research, the two traveled to Italy to meet with possible cashmere suppliers and production facilities. In February, they officially established Exemplaire and started work on samples.

The debut collection includes a dozen sweater styles, all in cashmere, ranging from single-ply crewnecks and V-necks to a five-ply style in the form of a Perfecto motorcycle jacket. Several of the styles incorporate lambskin insets, panels or elbow patches as decorative touches and accents.

There’s a turtleneck with an oversize cable pattern and two models with gently sloping shawl collars, one in a pullover style and another with a half-zip up the front. One zippered hoodie is fashioned from 80 percent cashmere and 20 percent chinchilla for extra plushness and finished with leather trim tracing the zipper and hoodie edge. (Maybe Mark Zuckerberg should take a look?)

There’s also a voluminous, oversize scarf in lightweight voile cashmere, made for enveloping oneself on an Air France flight. A stylized “X” logo is sewn onto some of the sweaters using a subtle tone-on-tone technique.

Prices range from $1,200 for a single-ply V-neck to $3,200 for the biker-style jacket and the chinchilla-blend hoodie. The styles come in a number of solid colorways, all of them sober and neutral: black, navy blue, dark gray, light gray, beige or ecru.

The collection is launching in just three accounts this July: Montaigne Market in Paris, Dover Street Market in London and Barneys New York, which will carry it in New York and Beverly Hills. The partners are also looking at selling into ski resorts in the fall, once the ski season begins. Next year, they are aiming to expand distribution to top stores in Asia, Russia, Scandinavia and Switzerland.

Exemplaire is slated for prime positioning at Barneys this fall, adjacent to Prada, Bottega Veneta and Fendi on the second floor of the New York flagship. “Exemplaire is more than a sweater; it is an element in the wardrobe of a young-thinking, sophisticated man with a strong sense of personal style,” said Tom Kalenderian, general merchandise manager and executive vice president of men’s and Chelsea Passage at Barneys. “True, the pieces are steeped in luxurious, artisan workmanship — all of this is valuable, but it does not overshadow the importance that these are not ‘my father’s clothes.’”

Kalenderian added that Meyers and Leboiteux were creating clothes for customers that were “genuinely similar” to themselves which made the line “especially relevant.”

Of course, Meyers is not exactly like most retail customers. He is an heir to his grandmother’s fortune, which was most recently estimated by Forbes at $24 billion, the 15th largest in the world.

The Bettencourt family has been mired in a very public three-year legal battle in France, dubbed “l’affaire Bettencourt.” It was triggered by lavish gifts, reported to be worth up to $1.3 billion, that Bettencourt bestowed on photographer François-Marie Banier, over the objections of her daughter, Françoise Bettencourt Meyers.

Last year, Bettencourt’s fortune was placed under the guardianship of her daughter and two grandsons — Jean-Victor and his younger brother, Nicolas — after a court determined that Bettencourt suffered from mixed dementia and Alzheimer’s disease.

Apart from his new board seat at L’Oréal, Meyers is also a member of the supervisory board of Téthys, the holding company for the Bettencourt family interests. Exemplaire, for its part, is self-financed by Meyers and Leboiteux, said the two partners.

Asked how he juggles his new duties at L’Oréal with starting a company, Meyers said it was fairly easy to manage. “It takes time, but it’s fine working on developing a company at the same time. Most people on the board of L’Oréal have their own companies — and they are running much bigger companies than Exemplaire,” said Meyers. (The board includes the ceo of Nestlé, which is the second largest shareholder in L’Oréal, following Bettencourt.)

Meyers said both his parents and his grandmother have endorsed his new business, with the latter asking for the chinchilla-blend hoodie in a size extra-small, he noted. “They are very excited. My parents are very happy and my grandmother is a huge fan of fashion, so she is very, very happy that we are doing fashion,” he said, adding that his grandmother has given him the most advice on the launch. “She is very, very picky on the cuts and details.”

The Exemplaire name is an elegant play on words, with the French word exemple meaning example, or model, and plaire signifying appeal, while also evoking a sense of seduction. Exemplaire is also used within the garment industry in the phrase, nombre d’exemplaires, meaning number of samples, so the name ties into the business of fashion.

While Meyers is officially the president of Exemplaire and Leboiteux is the chief executive officer, in reality the two do everything together, as there are no other employees at this point. “We go to meetings together and we go to the post office and UPS together,” said Meyers with a laugh.

The duo work mostly out of Meyers’ apartment in the Neuilly suburb of Paris, which is in his parents’ building and across the street from his grandmother’s. “We’re a new company and we think the investment should go into the clothes and not the office or a studio,” explained Meyers. “Maybe one day we will take a showroom or headquarters but for the moment we work from home and focus the investment on the quality of the design and product.”

For production, they are working with several factories in the Tuscany region of Italy and the Mayenne region of France. “We don’t put all our eggs in one basket,” Meyers said of diversifying the supply chain.

Meyers has studied business throughout his education. He earned his baccalaureate degree in 2004 from the prestigious Ecole Active Bilingue and his B.A. in economics and business management in 2007 from Université Paris X Nanterre. In 2011, he earned a master’s degree in marketing, business management and finance from the Institut Superieur de Gestion in Paris. He twice spent time studying abroad at the University of California Los Angeles, doing a summer session in 2005 in American management and corporate finance and then enrolling in a 2008 certificate program in general business.

Professionally, Meyers’ first work experience was as a project manager for the French Red Cross during the summer of 2006. In 2009 he took a position for four months working as a salesman at the Louis Vuitton store on Avenue Montaigne in Paris, followed by a summer internship at Goldman Sachs in London in its private wealth management division.

“As I love fashion and marketing, I thought it was important to work on a store floor to get a first-hand experience of what customers want and who they are. I loved it,” said Meyers of working at Vuitton.

Meyers was less taken with his time at Goldman Sachs. “I think that’s what made me want to do marketing,” he said with a laugh.

In 2010, Meyers joined the family business, taking an assistant product manager position at the Yves Saint Laurent Beauté division of L’Oréal. The following year, he took part in an immersion program at L’Oréal working in a number of divisions and countries, before deciding to launch Exemplaire.

Leboiteux comes from what he calls “a classic French family of five children,” with a father in the import-export business and a homemaker mother. He dubs his mother an enthusiastic fashion client with a special fondness for Yves Saint Laurent, Bottega Veneta and Hermès.

Leboiteux studied hotel management at the Albert de Mun and Jean Drouant schools, in addition to interning at the Hotel Le Meurice. He later earned a business management degree in 2010 and worked for a year for a finance and tax consulting firm.

Meyers and Leboiteux plan to expand Exemplaire into small leather goods including wallets, card holders and possibly iPad cases next year, using high-end exotic skins. Men’s leather jackets and a women’s knitwear collection are also on the agenda. For spring 2013, the duo are already working on lightweight cashmere sweaters, some incorporating vicuna blends.

“I think style is important because if you have style and nice clothes and are comfortable you feel better and are more confident,” said Meyers. “It’s always nicer to have good style and look good.”