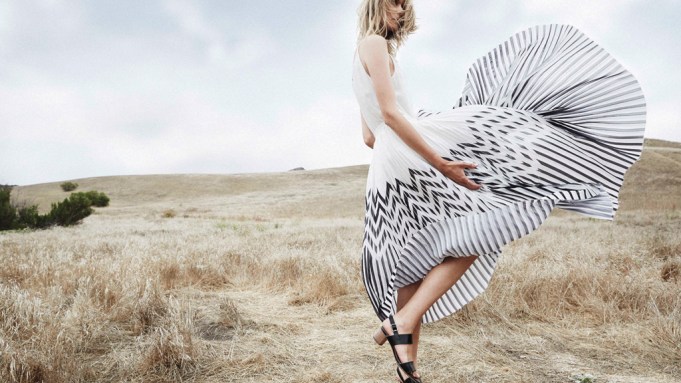 From playing dress-up when she was a child in the Escada and Jordache boutiques that her grandmother owned in South Korea to designing women’s clothing for Joie, Sam Edelman and Abercrombie & Fitch, Allison Kim always held on to the dream of her own brand.

The Otis College of Art and Design grad launched it this past spring, selling fit-and-flare dresses, shifts and other styles that retail between $170 and $300 at Nasty Gal and some 50 specialty stores across the U.S. Her forthcoming spring collection reflects her preference for printing on interesting materials by placing a wide border of black chevrons on a white pleated polyester chiffon dress. She also applies large turquoise flowers on polyester taffeta. Pastels are balanced by classics like ivory, navy and black. “When I design a collection, I always make sure the pieces are versatile but also feminine,” said Kim, 32. “Customers are looking for things they can keep for a while but at a good price.”

Raised in India by a Muslim father and Sikh mother, Kopal Kopal didn’t have a last name until she arrived in the U.S. when she was 18. At the time, her parents decided to repeat her first name, which means “newborn leaf” in Sanskrit.

As a tribute to her heritage, the FIT-trained designer works with artisans living in rural villages in India. Using hand-loomed jacquardlike cottons, Kopal adheres to an easy and eco philosophy enabled by pull-on, pull-off silhouettes, vegetable dyes and cloth ties replacing zippers. For resort, her signature palette of white and blue is accented with yellow, green and orange, while textile artists dabbed paint to create dots in tribal geometric patterns. It’s quite a contrast from her years designing sportswear at Kenneth Cole, Ralph Lauren and Converse. Her retail network includes some 75 specialty stores like L’Adresse in Switzerland, Rose Bud in Japan, Montebello Emporium in Australia and Bhoomki and Topo Ranch in the U.S. Tops, dresses and shorts retail from $125 to $225 and fit “more a mind-set than a body type,” said Kopal, 37. “It’s so important not to pay attention to who you’re wearing, but what you’re wearing and why you’re wearing it.”

A change in scenery is leading to an evolution in style for veteran knitwear designer Jerry Chen. After 25 years in New York, where he studied at Parsons School of Design and served as design director at Michael Simon, he moved to Los Angeles last year. He also switched his focus to lightweight sweaters in clean silhouettes but with novel details like mixed fabrics. For instance, one ivory tunic from resort combines cotton knit in the front and silk chiffon in the back. Working mostly in black and white, he also adds flashes of light blue and navy to his line, which retails from $125 to $260 at Nordstrom and about 150 specialty stores, including Gitane in Menlo Park, Calif., Betsy Fisher in Washington, Nat By Chakaya in Lebanon and Enchainement in Japan.

Despite his 20 years in knitwear, this is the first time Chen, 44, has had his own company. “I was looking for something more simple and clean,” he said, “but there is still a feminine style and element of design.”

After logging more than a decade in the juniors sector, Lisa Yoon got to be a kid again when she discovered Los Angeles-based dye houses that handle garment and tie dyeing for the premium denim industry. “It was fascinating — all the colors you can play with,” she recalled. The dyeing techniques formed the foundation for her company that she named after her now college-age children.

Produced domestically, the brand stocks stores such as Elyse Walker, Principessa, Urban Outfitters and Anthropologie with oversized blazers, loosely knit sweaters, culottes, rompers and caftans, all dipped in dyes that are vibrant but eco-friendly. For spring, she’s introducing scarves and sexier silhouettes such as a skirt with bustier, and inserting mint green and blush into her palette of indigo and gray. Retail prices run from $50 to $200. She’s also adding waffle-textured gauze and muslin to her textile library, which includes lightweight Modal and Tencel. “That should elevate the line,” Yoon said. “I try not to do the boho tie-dye look that everybody is doing.”