The designers were among attendees at the Vogue Dubai Fashion Experience over the weekend. 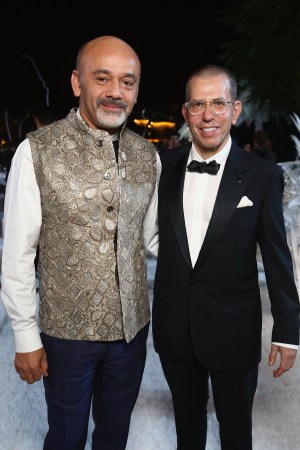 DUBAI — In a city known for importing its luxury brands, this weekend Dubai brought in a bevy of fashion celebrities for the Vogue Fashion Dubai Experience.

“We started this three years ago and called it an ‘experience’ and I’m very happy with how this experience has grown,” said Sozzani. “We are not just trying to drive more traffic into stores, as the Vogue events do around the world, but also support a new generation of designers.”

Vogue Fashion Dubai Experience added a new element this year to do that — the launch of Vogue Italia’s Who Is On Next? Dubai prize. A jury that included Louboutin; Fendi; Federico Marchetti, chief executive officer of Yoox Net-a-porter Group, and other industry experts reviewed the work of 25 young designers from the Middle East, Asia and Africa in order to identify and bolster new fashion talent.

“I’m excited to see the evolution of our collaboration to a point where it is advancing the industry we are in,” said Mohamed Alabbar, chairman of Emaar Properties, owner and operator of The Dubai Mall. “Franca has always had a passion for supporting young designers, and Dubai is a hub where so many young businesses can flourish.”

The Dubai Mall, which had more than 90 million visitors during the first nine months of 2015, has fast become one of the most sought-after retail destinations in the world. While retailers in Dubai are reporting a dip in retail sales, on Sunday, Emaar Malls reported growth of 30 percent over the same period last year, with $332 million in net profit during the first nine months of 2015.

“Sometimes people don’t understand the traffic and volume that this city sees, but we are just a four hour flight from over 2.5 billion people. Dubai is really a hub for the region from the Middle East, Africa and Asia,” added Alabbar.

The winners were: Hussein Bazaza, a Lebanese designer who was invited to present his collection during Altaroma; Teppei Fujita, the Japanese designer of the brand Sulvam, who will present his men’s wear collection at Pitti Immagine Uomo, and Milan Fashion Week will welcome Anais Mak, a Hong Kong-based designer, and Jourden Sindiso Khumalo of Botswana. Vogue Talents, the showcase project promoted by Vogue Italia, will support Vellies Aurora, the Canadian-Ghanaian designer behind the footwear brand Brother James; Nathalie Trad, a Lebanese handbag designer, and Anita Horsfall, a Nigerian-Ghanaian designer of the jewelry brand Anita Quansah London. Yoox.com chose three brands to be globally distributed through its premium platform: Laduma by Maxhosa, a men’s wear label designed by South African Laduma Ngxokolo; Susana Traca’s shoe line, and Khumalo’s collections.

Speaking to a large crowd of young designers and fans at the Dubai Mall, Louboutin advised, “It’s important to really focus on your creativity first, really listen to who you are and what you like and think about where exactly your creativity lies instead of just trying to rush into being part of the frenzy of the fashion world.”