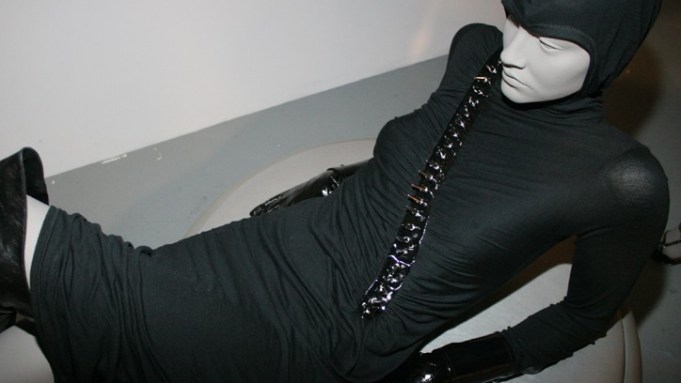 LOS ANGELES — Designer Louis Verdad is breaking with the past in an effort to build a more marketable future.

Verdad was known for indulging in the glamour embodied by Forties screen sirens for his tailored women’s clothing. Now, after declaring bankruptcy 18 months ago and losing the rights to use his name, the Los Angeles-based designer is preparing to launch a 42-piece fall collection called Louver, which is divided between a high-end line he’s producing for custom orders and a less expensive contemporary grouping that he plans to wholesale. Although the tailoring remains constant, Verdad replaced the jewel tones that infused his previous namesake line with an all-black palette. He also adopted a new business philosophy.

“I intend to do everything different,” Verdad said. “My quality is going to be better than before. I’m going to do it myself. I’m going to make sure the customer gets what we ship.”

The recession can deter many entrepreneurs, but Verdad faces the extra challenge of regaining the trust of retailers and textile providers who were left with broken promises and unpaid bills when his previous business, Louis Verdad Inc., failed.

Favored by Madonna, Louis Verdad at its peak about four years ago generated more than $4 million in annual sales. Flawed production and shipping, coupled with the designer’s lack of oversight and inability to fix the mistakes, led Louis Verdad to file for bankruptcy in December 2007. American Business Fund, a Los Angeles-based firm that provided financing for Louis Verdad Inc. during its last months in business, now owns the rights to the brand name. Verdad said he is in mediation with American Business Fund to obtain the use of his name.

“I want a second chance,” Verdad said. “I will ask for it. I will back it up with good product.”

Verdad is selling Louver to retailers such as Noni, a contemporary boutique in Los Angeles that carried Louis Verdad. He’s trying to be flexible, revising prices and lowering the minimum quantities if requested by retailers.

The designer also learned how to diverge from high to low for the sake of marketability. In his high-end grouping, mink puffs adorn the cap sleeves on a $1,200 shift accentuated with intricate appliqués of washed lambskin leather. He tweaked the same style to wholesale for $210 by using a lighter wool gabardine costing about $8 per yard compared with the other dress’ $49-per-yard fabric. He also discarded the mink, as well as the appliqués, which were replaced by a wide band of leather encircling the hem.

With a $650 hooded rayon jersey sheath dramatized by spikes embedded on a leather panel bisecting the front, Verdad made it more palatable for a contemporary customer by extricating the sharp embellishments and lopping off the hood to fashion a turtleneck instead. As a result, Verdad shaved $471 off the cost for a $179 wholesale price tag.

On another open-back dress crafted out of wool gabardine, he used a less expensive belt buckle and replaced the wool-cashmere sleeves with billows of silk charmeuse. The two versions go for $1,100 and $202, respectively.

“I have to be able to sell my product,” Verdad said, noting that his inaugural collection displays an abundance of dresses and an all-black palette because dresses are good sellers and black fabric is easy and cheap to find.

“That was my whole mistake [with Louis Verdad Inc.],” he said. “I didn’t pay attention to my markets. I learned you have to be frugal. You have to be versatile.”

After losing his name and business, Verdad cast a wide net for a job, interviewing at a fast-fashion retailer and also at high-end design houses in New York. But no one was willing to take a risk on him in a slumping economy, so Verdad began working on Louver in January with several thousand dollars that he raised.

Tucked behind an unmarked door in a converted warehouse near Chinatown, Verdad’s studio is a fraction of the size of his former 10,000-square-foot space. Instead of some 30 employees, his staff is fewer than a half dozen, including interns. Verdad declined to forecast first-year sales.

Verdad hung photographs snapped by August Bradley of models striking dramatic poses in dresses from past collections. A picture of Jesus Christ is pinned on one wall.

Verdad, however, hasn’t abandoned his previous palette. For his sophomore set shipping for the holiday season, he selected vibrant hues of red, yellow, melon and fuchsia.

“I’m still learning every day,” Verdad said. “In order to create a brand, you need to have a vision.”