The Meatpacking District is a neighborhood on the verge.

Louis Vuitton, Cartier and Alexander McQueen are reportedly looking for retail space within the 20 square blocks of Manhattan’s far west side. (That would be a quick return for McQueen, which decamped to Madison Avenue in 2013). H&M, Zara and J. Crew are also in the market for space in the neighborhood, all spurred by the recent opening of the Whitney Museum of American Art, which expects to attract 350,000 well-heeled art lovers a year.

The first phase of a 100,000-square-foot fashion and manufacturing creative hub with a focus on product development will open in the neighborhood next month, bankrolled by Uniqlo and spearheaded by Andrew Rosen, chairman of Theory. And longer-term, there’s the extension of the High Line park to Hudson Yards, where Neiman Marcus will await, and a cultural pier envisioned by resident (and area pioneer) Diane von Furstenberg and her husband, Barry Diller.

“It will mark a seismic shift west” for retail, Stephen Stephanou, a principal of Crown Retail Services, said of the combined initiatives.

The glut of vacant retail space in the neighborhood hasn’t stopped property owners from making the Meatpacking District one of the costliest areas in Manhattan, with asking rents ranging from $350 to $750 per square foot.

“I’ve always been a big fan of the Meatpacking District,” said Joseph Sitt, chairman and chief executive officer of Thor Equities. “We’re the largest landlord in the area. When we started, nobody was really a believer. I’ve been betting that the Whitney will change the neighborhood. It may take a little time for it to happen. The area is great. It’s hot.” 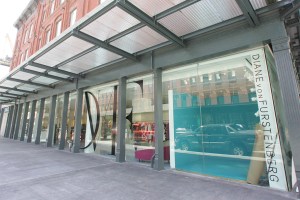 Others find the Meatpacking District a little undercooked for their liking. “We like things that are more established,” said Isaac Chera, a principal of Crown Acquisitions. “We don’t like being first. But [the neighborhood] could get there.”

Jeffrey Kalinsky, who in 1998 brought fashion to the area when he opened Jeffrey New York on a desolate stretch of West 14th Street, said it’s important to distinguish between the hype in the neighborhood and the reality.

“The Meatpacking District is a wonderful place to be and live,” Kalinsky said. “The retail is different. It’s not in any way, shape or form as prestigious as SoHo. It never was. The city is diverse and there are lots of different places to go and shop.”

Darryl Romanoff, a property owner whose family is entrenched in the neighborhood, sees demand swelling from designers. “The High Line is robust and there’s lots of tourists. High-end fashion tenants are calling for space,” said Romanoff, whose company is developing 860 Washington Street, which will have 20,000 square feet of retail space.

“When we were the hot new neighborhood, we had Alexander McQueen, Stella McCartney and other high-end fashion companies,” said Mazdack Rassi, a longtime resident and the founder and creative director of Milk Studios. “We realized that our level is Patagonia, Levi’s and Apple. With the arrival of the Whitney, it will push it up a bit, but at the end of the day, it’s not just foot traffic and the demographics. There are not a lot of designers who can afford the rents.”

Rassi said contemporary retailers would be complemented by more forward and edgy labels. “There’s going to be a lot of magic on the fringes, on Washington Street, where Nicholas Kirkwood is located,” he said.

“The Meatpacking District is transforming into a district of innovation,” contended Jared Epstein, vice president and principal of Aurora Capital Associates, citing an upcoming Samsung flagship, Intersect by Lexus and Warby Parker as examples.

It’s an area that has been many things to many people. The slaughterhouses and meatpacking plants that moved in at the turn of the century gave the neighborhood its name. In the Eighties, prostitutes claimed the Meatpacking District, turning it into another kind of meat market. Then came clubs and bars looking for an edgy, rough-and-tumble atmosphere.

Some lament the district’s evolution to open-air mall and warn that if the neighborhood completely surrenders its character, it will lose its appeal. Spiraling rents are blamed for pushing out businesses such as Florent, whose clientele on any given night could include bikers, transvestites, young families with kids and Madonna and her dancers.

Michael Phillips, president of Jamestown, which operates Chelsea Market, said he wants to create grown-up, sit-down, evening restaurants in the complex’s lower level, signaling the neighborhood’s arrival. “There’s an energy in the fashion business, but maybe it’s a little more established,” he said. “It’s not the cutting edge. The Whitney will bring some crazy numbers,” he added, referring to asking rents. “That’s the reason for some of the vacancies. But downtown is interesting in a way it hasn’t been before.”

“The rents are why everyone left,” Kalinsky said. “That’s why I may have to leave. I doubt I’ll be able to stay when my lease is up in April 2019.”