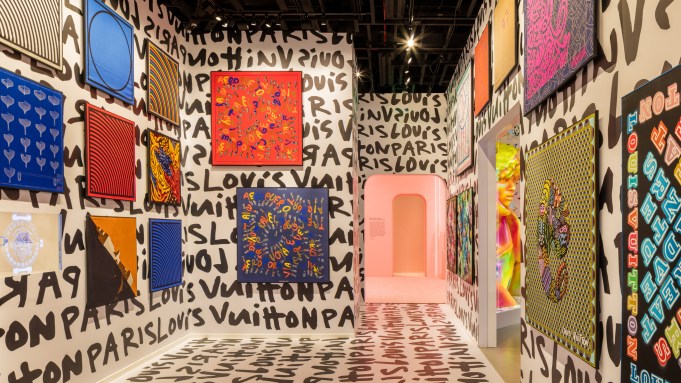 Louis Vuitton’s long, close and fruitful relationship with Japan will reach another zenith in March with an exhibition chronicling its extensive collaborations there, plus a new glass tower in Ginza incorporating a boutique, LV Café, and Vuitton’s latest surprising brand extension: chocolates.

Slated to open March 17, the new seven-story Ginza Namiki building rises from a site Vuitton has occupied for 40 years, while the “Louis Vuitton &” exhibition — drawing on 160 years of cultural exchange and highlighting high-profile collaborations with the likes of Rei Kawakubo and Takashi Murakami — opens March 19 for a two-month run.

Disclosing the twin developments in an exclusive interview, Michael Burke, chairman and chief executive officer of Vuitton, said it’s all about engagement with one of the most advanced and sophisticated luxury markets in the world.

Moreover, he said the twin projects are emblematic of a new era of bespoke stores, events and content.

“It’s not about taking what we did in Paris and replicating that in Tokyo,” he said. “You don’t come to Japan, do a store opening and then come back 10 years later. It’s about engagement that is daily, weekly, monthly. There’s always something going on.

“It’s not about buzz, or image or advertising campaigns or a store opening — the usual suspects,” he continued, calling the readiness of the building now — almost five years in the making — “fortuitous,” and yet another example of cultural exchange, noting its undulating facade evokes the waves of Tokyo Bay, and that the eatery was conceived by famed Japanese chef Yosuke Suga, who also developed the flavors for Le Chocolat V.

“Proper engagement is not just about store openings — that’s a commercial activity. But what we have to be involved with goes way beyond commercial, it’s cultural,” he stressed.

Cue the exhibitions, whose 10 rooms unfurl an impressive array of creative exchanges and artistic collaborations, with a particular focus on Japan, given that the likes of Kawakubo, Fragment’s Hiroshi Fujiwara and the late Kansai Yamamoto have all co-created products or done special projects for Vuitton, as have the artists Yayoi Kusama and Murakami, whose colorful interpretation of Vuitton’s famous monogram —scattered with a few eyeballs — were a blockbuster and had a 12-year run.

Kawakubo, the fashion maverick behind Comme des Garçons, gets her own room at the exhibition, which reminds visitors that her first fling with Vuitton was designing six “party bags” in 2008, which were showcased at a temporary concept store in Tokyo’s trendy Aoyama district.

Asked by WWD at the time if she viewed Vuitton as a peer, or her antithesis, Kawakubo replied: “I think the keeping up of the tradition of making bags from so long ago is wonderful.”

For the new exhibition, Vuitton reproduced Kawakubo’s Bag With Holes — from a 2014 collaboration to mark the 160th anniversary of the brand — in a giant scale. The unusual tote employs the protective cloth sack in which Vuitton leather goods are sold as a liner — to keep the contents from spilling out of the giant openings.

While impressed with the durability and finesse of its monogram canvas, designed to resist everything and never unravel, Kawakubo told Burke, “I want Vuitton to struggle with imperfect” and demonstrated to craftsmen how to fray the edges of the holes punched out of the bags with pliers.

The late Karl Lagerfeld, Helmut Lang, Vivienne Westood, Cindy Sherman, Frank Gehry, Christian Louboutin and Marc Newson are among the varied creative figures who have reinterpreted the monogram over the last 25 years.

It’s well documented that George Vuitton, the only son of founder Louis, winked to a craze for all things Japanese in France around the turn of the century when he created the brand’s brown-and-gold monogram canvas, some of the flower shapes reminiscent of cherry blossoms. A 2016 Vuitton exhibition in Tokyo also documented the monogram’s likeness to Japanese family crests, which hold strong emotional sway and helped fan the island nation’s affection for Vuitton’s leather goods. Meanwhile, Japan-inspired Vuitton with its extreme attention to detail, and obsession with quality products and impeccable service.

The new exhibition at Jing, a glass building in Harajuku, opens with a bespoke multimedia installation by visual and sound artist Ryoji Ikeda, cuing up a dialogue between the historic trunk-maker, founded in 1854, and its dalliances with a range of Japanese and international creatives.

Among interesting historical tidbits highlighted in the show are Japanese Emperor Hirohito’s 1921 visit to Paris, for which Vuitton redesigned the facade of its Avenue des Champs-Élysées store to depict the Land of the Rising Sun. Visitors can gawk at a reproduction of Gaston-Louis Vuitton’s famous window display, depicting a rustic garden with a stone lantern.

More recent artifacts on display are to include ready-to-wear from Vuitton’s 2018 cruise collection by Nicolas Ghesquière, unveiled at the Miho Museum in Kyoto and featuring motifs by Kansai Yamamoto, who paved the way for Japanese designers in Europe. There are men’s looks, too, including Nigo’s Mount Fuji bomber jacket from 2020 and the opening look from Virgil Abloh’s spring 2021 men’s collection for Vuitton, presented in Tokyo.

“We think that architecture and luxury work hand in hand, and our clients expect us to make an architectural statement today when we open in a location as iconic as Ginza,” Burke explained over Zoom. “Again, it’s not just about ringing the till. It’s about engaging with a Japanese architect, engaging with the urban planning of Ginza, engaging with the origins and the providence of Ginza.”

To wit: Its mesmerizing, color-shifting outer shell recalls that the Ginza neighborhood was once a sandbar peninsula before Tokyo reclaimed more land, and its blue tint evokes the morning sun shimmering on Tokyo Bay. 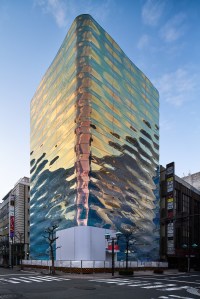 Water metaphors recur throughout the store interior: A four-story “feature wall” in plaster reinterprets Kimiko Fujimura’s 1977 painting “Wave Blue Line,” while rounded counters, ceiling panels and furniture by Isamu Noguchi contribute to a “sense of flow,” according to Vuitton.

Vibrant color can be found throughout: in the furniture by Pierre Paulin and Stefan Leo; in artworks by Ed Moses and Vik Muniz, and in carpets and design objects. A scheme of pink and orange plays out on the women’s floor; red, turquoise and lime on the men’s.

Marino has cited “fun” and “happiness” as new watchwords in luxury retail. But according to Burke, “even before fun, what we wanted to do is the opposite of replication,” convinced that Japan is leading the return of luxury to its bespoke ways after a long period when “luxury had more to do with exquisite replication.”

“It’s a much more interesting time in Japan because Japan is reconnecting with its past, which is all about uniqueness and bespoke. And that’s what we’re doing with our stores. Every single store is a very unique exercise,” he said.

The store boasts VIP and VIC salons on the sixth floor, a smattering of its travel-inspired design objects, known as Objets Nomades, and a host of exclusive products, including a re-edition of Kawakubo’s Bag With Holes, the men’s LV Ollie sneaker and a slim Tambour with blue and purple sequins.

Le Café LV and Le Chocolat V, located on the uppermost floor, represent a further push into hospitality for Vuitton, which has indicated that eateries and even hotels could be a future expansion avenue for the megabrand.

In January 2020, Vuitton opened its first restaurant within its new flagship boutique in Osaka, Japan, also helmed by Suga.

Burke noted the Tokyo café is a more casual eatery than the “very exclusive” Sugalabo V in Osaka, which gets booked up months, if not years, in advance.

“A store is not just about objects and purchasing objects. The latter is a beneficial consequence of creating engagement, but it’s not the objective. The objective is engaging with your clients in every single city,” Burke said. “They’re demanding a Vuitton point of view on their city.”

The chocolates, to be sold in boxes of four, nine, 16 and 125 pieces, come in squares or molded into the shapes within the famous LV monogram. Given travel restrictions, Burke had not yet had the chance to taste them, though he hinted the packaging is a feat.

“Most importantly, it’s about creating an experience,” Burke said. “How do you translate Vuitton into food? You know, we successfully translated trunks into fashion. So it’s a creative exercise.”

Likewise its fleet of collaborations with various creative figures — from architects and designers to artists — which Burke said are highly appreciated in Japan and seen as an emblem of mutual respect.

Indeed, one unique feature of powerful luxury brands like Vuitton is an ability to bring together creative realms that rarely meet.

“It’s going to be a little bit of an alumni gathering of Japanese artists, and it’s never happened before,” Burke said of the small cocktail planned ahead of the opening, health conditions allowing. “These people have never been together in the same room. So I think it would be a very emotional moment.”