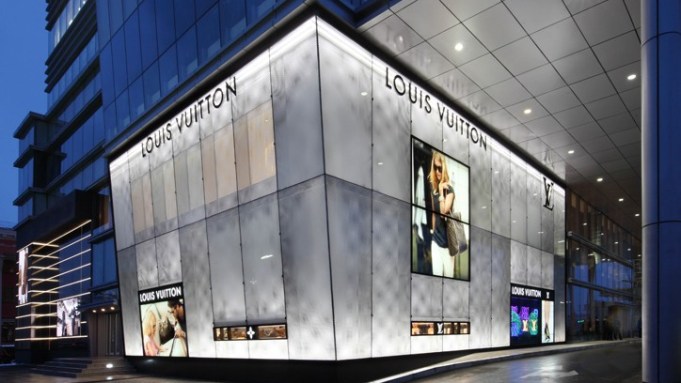 PARIS — Sukhbaatar Square in Ulan Bator, the capital city of Mongolia, is so central that many of its million-plus inhabitants are bound to traverse it on a regular basis.

That means its newest resident, a 5,300-square-foot Louis Vuitton boutique with a two-story high, 112-foot wide wraparound facade, is a conspicuous beacon of luxury in a remote country becoming wealthier by the minute, thanks to enormous gold, copper and uranium reserves.

Vuitton, a luxury pioneer that opened its first store in Greater China in 1992, is excited to be among the first to arrive in the region. “Why be first? You have 100 percent share of voice,” enthused Yves Carcelle, Vuitton’s chairman and chief executive officer, who is slated to host an opening celebration Friday. “It helps impose your brand as the standard of luxury. I honestly think it’s the right move.”

Carcelle said Vuitton’s 440th store is projected to be profitable within its first year of operation.

Thanks to the Internet and Russian fashion magazines, Mongolians are already familiar with the Vuitton brand and have been purchasing its products from Vuitton stores in three popular destinations: Moscow, Beijing and Seoul, Carcelle said. Another promising sign is the presence of many Vuitton bags “on the arms of elegant women” in Ulan Bator’s trendy nightclubs and restaurants, he added.

Vuitton is also clearly banking on the vigorous economic development expected in tandem with major mining ventures. Already, the skyline is dotted with construction cranes. “It’s a country that knows it has to modernize but wants to do it in a controlled way,” Carcelle said.

The two-level boutique in the new skyscraper Central Tower — which already houses an Ermenegildo Zegna shop that opened earlier this month — features a 30-foot long “bag bar” flanked by men’s and women’s departments, each devoted to extensive selections of leather goods, footwear and accessories.

Upstairs is a circular VIP room, the shape reminiscent of a yurt. A Vuitton saddle was made especially for the store in recognition of Mongolia’s nomadic roots and strong horse riding culture.

Carcelle noted VIP rooms, and the elite service that comes in tandem, are particularly prized in Asia.

To mark the opening, Vuitton plans to donate more than 6,000 educational books to support some 220 primary schools across Mongolia, still a poor country.

Meanwhile, Vuitton continues its global retail expansion, with major stores slated to bow in December at CityCenter in Las Vegas and One Central in Macau. “Casinos are always a good vicinity for luxury,” Carcelle said. Next year, Vuitton will enter two new countries, Lebanon and the Dominican Republic, he added.